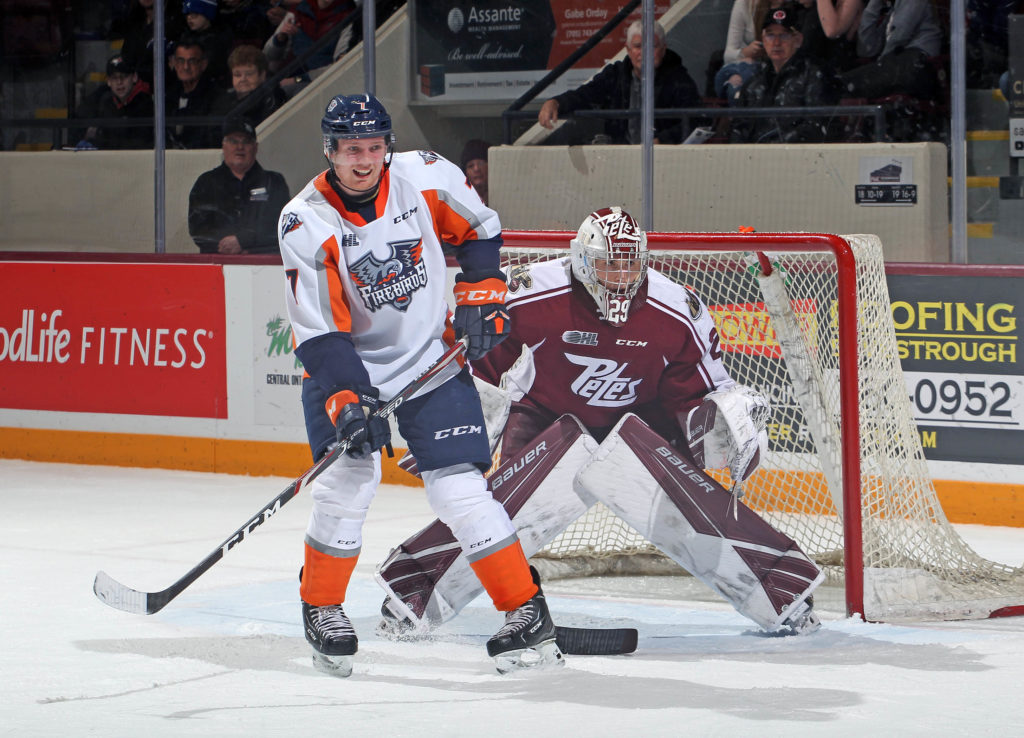 Two first period goals and a Hunter Jones 30 save shutout – his second straight on home ice – resulted in a 2-0 victory against the Flint Firebirds on a snowy Saturday night match up at the Peterborough Memorial Centre.

Moments later, the PMC was loud again as fans jumped to their feet to celebrate with Der-Arguchintsev as his pass attempt was deflected off a Flint player and went high on Popovich for a 2-0 lead. Thomas picked up his second assist of the night and Der-Arguchintsev extended his goal streak to three games on the play.

SAMMY! @semder009 floats the puck past Popovich to extend our lead to 2-0!#GoPetesGo | #LeafsForever pic.twitter.com/NKVx4WsonV

Peterborough out shot the Firebirds 14-7 and two goals from Toronto Maple Leafs prospects resulted in the Petes ahead 2-0 after 20 minutes.

The Peterborough Maple Leafs have us up by 2⃣ after 2⃣0⃣!#GoPetesGopic.twitter.com/BjUVo2zTej

Despite numerous chances for both teams, both Jones and Popovich stood tall for their respective teams. The Maroon and White were still ahead 2-0 and outshot Flint 29-19 after 40 minutes of hockey inside the square corners.

The officials raised their hands to call two separate infractions against Peterborough with two minutes remaining in the game, ultimately giving the Firebirds a 5-on-3 advantage. The seventh ranked penalty killers shut down the Firebirds and a last-minute block by Jacob Paquette sealed the win for the Lift Lock lads.

Peterborough out shot Flint 38-30. Jones, Der-Arguchintsev, and Robertson were named the game’s First Choice Haircutters first, second, and third stars of the game. The Mark’s Hardest Working Pete was Thomas.

Peterborough welcomes the Niagara IceDogs on Sunday, January 19 at the PMC for a matinee 2:00 PM match up. Fans are encouraged to attend and participate in the post-game skate with the Petes following the game. Fans are reminded that tickets for Saturday, December 14’s postponed game are valid for Sunday’s game against the IceDogs.