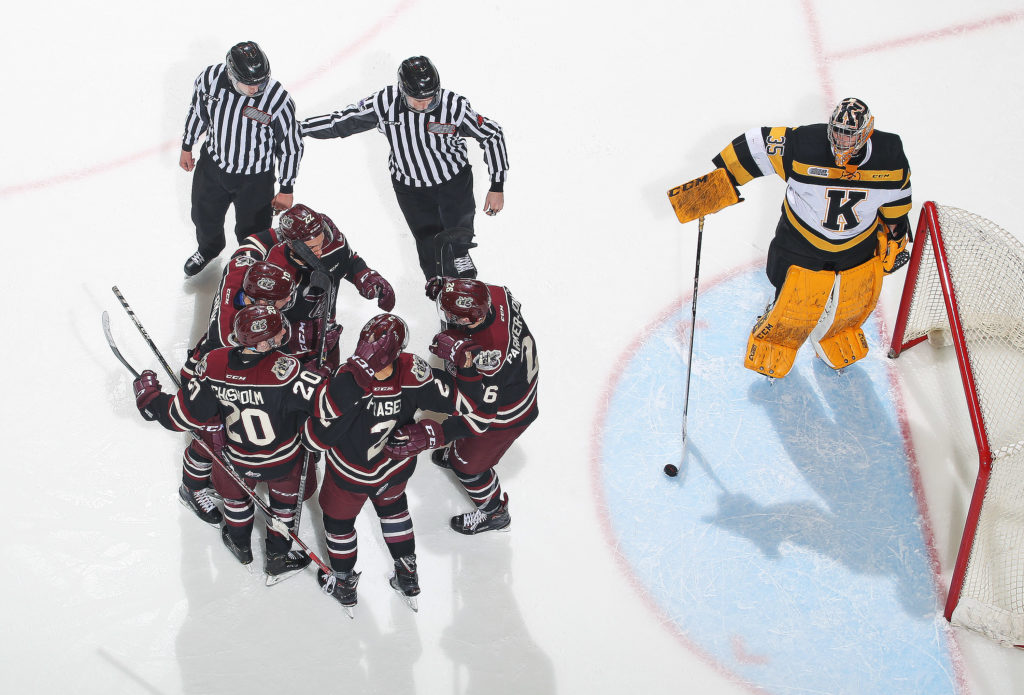 The Petes returned home from their road trip sitting in sixth place to take on the Kingston Frontenacs for the last time this season. When all was said and done it was the Maroon and White who came out on top, taking the final game by a significant unanswered score of 7-0 and the season series with a 7-1-0-0 record.

It wasn’t until 6:42 in to the first period that a spark was lit, it just so happened to be the hometown team starting it off as Max Grondin finally ripped the puck past Brendan Bonello after a flurry of blocked Peterborough shots. Declan Chisholm and Michael Little would be credited with the first assists of the night.

The Grondin goal was the only goal of the period and thus 20 minutes would come to a close with the Petes leading by a single goal and holding the shots on goal in their favour 14-11.

Strong 💪 start to the game for your Petes! Must be because of those strength and conditioning coaches at @HybridFHP 😉#GoPetesGo pic.twitter.com/AI6bZFIzgb

The Petes struck again early in the second as Liam Kirk took a pass from Semyon Der-Arguchintsev and Ryan Merkley to claim the second goal for the Maroon and White, making it 2-0 Peterborough.

TOP SHELF WHERE YA KEEP THE NEW BOTTLE O' HENDO'S 🇬🇧! @kirky_1424 picks the top corner after a great pass out of the corner from SDA! 2-0 Petes!#GoPetesGo pic.twitter.com/1yTJsCF6aa

Only a few minutes later the lead was further increased after a review as a goal was awarded to Chisholm assisted by SDA alone which would mark an unanswered 3-0 for the home squad.

Once again with six minutes remaining in the period the fourth unanswered goal came off a Peterborough stick, this time with the Fronts down a man Bonello was beat by Nick Robertson courtesy of the combined efforts of  Merkley and Kirk.

After a total of 40 minutes the score was 4-0 in favour of the Petes as they held a firm control of the shots yet again 29-19.

The Liftlock Lads would keep their momentum rolling to start the final period of play as a puck turned over by Adam Timleck would find Kingston native Chris Paquette who subsequently slipped it past Bonello to make it 5-0 for the Petes.

To add insult to injury, Peterborough’s Cameron Butler would join the score sheet after firing a top shelf goal off an assist from Kirk which would be the Brit’s third point in the night to put the Petes up 6-0.

BUTSY! That shot had 👀 for the top corner as @CButler_21 makes it 6-0 Petes! Assist to @kirky_1424 on Butler's 17th.#GoPetesGo pic.twitter.com/xUNXrCwoxs

With five minutes left in the final meeting with the Frontenacs, the Petes practically secured their victory with a goal from John Parker-Jones which was assisted by Cole Fraser and Erik Cermak.

Parker-Jones’ goal would finish the game on a high note for the home side as the Petes would beat the Fronts by a score of 7-0.

The three stars respectively were Kirk, Chisholm, and Hunter Jones with the Mark’s Hardest Working Player of the Game awarded to Little.

The Petes head on the road for the weekend to visit the Barrie Colts on Saturday, March 9 at 7:30pm and the North Bay Battalion on Sunday, March 10 at 2:00pm. They’re back in action on home ice on Thursday, March to take on the Ottawa 67’s at 7:05pm. Tickets are available through the Baker Tilly Box Office in person, over the phone at (705) 743-3561, and online.