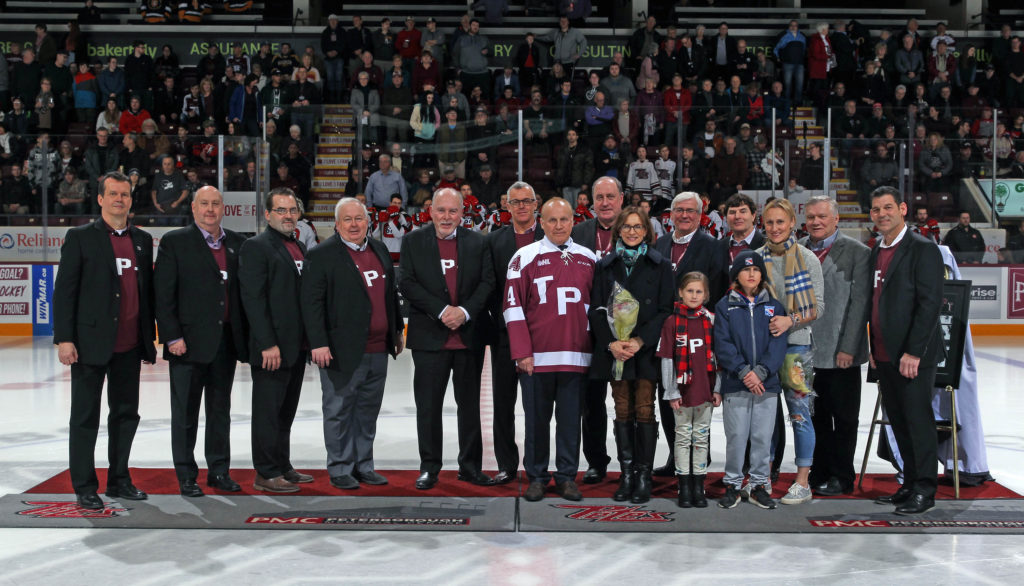 Hunter Jones stood tall and stopped all 23 shots he faced to shutout the first place Ottawa 67’s. Newly acquired Petes Akil Thomas and Jack York assisted on Nick Robertson’s game-winning goal to give the Petes their first win in 2020.

Prior to the game, the Petes honoured 1970-73 Alumnus Colin Campbell with a banner raising ceremony for all of his playing, coaching, and executive accomplishments. The Petes donned special 1970-73 TPT jerseys in honour of Campbell for tonight’s game, which are available for online auction.

The first period was filled with lots of shots, hits, and speed but both Jones and Cedrick Andree stood tall for their teams to keep the game scoreless.

Nothin’ but a couple of goose eggs so far at the PMC, but an entertaining game for tonight’s sell out crowd so far!#GoPetesGo pic.twitter.com/8LNEUljl4m

Early in the second, 3,833 fans in the sold out PMC jumped to their feet to celebrate with Nick Robertson after his lethal wrist shot beat Andree five-hole to notch the game’s first goal. Thomas and York picked up their first assists as Petes on Robertson’s 26th goal of the season.

ROBBY! @nickrob2001 beats Andree five-hole to get the Petes on the board! The new guys @AkilThomas2 and Jack York connect for the assists – their first points in Maroon and White! 1-0 Petes!#GoPetesGo | #LeafsForever pic.twitter.com/fBs04r8Ma9

Just before the period expired, Michael Little fought off two Ottawa 67’s in the offensive zone which led to a backhand pass from Brady Hinz to Max Grondin. Grondin’s quick wrist shot beat Andree top shelf for his ninth goal of the season to give the Petes a 2-0 lead.

Peterborough turned their intensity up a notch in the second as they found themselves ahead in shots, face offs, and up 2-0 after 40 minutes inside the square corners.

Halfway through the third period, Captain Zach Gallant sent off the Petes goal horn for the third time of the night when he skated over the offensive blue line and his long shot wrist shot was too much for Andree to handle as he gave the Maroon and White a comfortable 3-0 lead.

GALLY!!! The captain @zachgally breaks in alone and squeaks the puck past Andree for his 21st of the season! 3-0 Petes!#GoPetesGo | #SJSharks pic.twitter.com/slCeZMck2T

A late penalty against Ottawa for tripping allowed the ninth place power play unit to convert with the man advantage. A speedy Robertson entered the offensive zone with his head up and made a pass to Semyon Der-Arguchintsev who was all alone in front of the net. Der-Arguchintsev’s one-timer beat Andree for his fifth of the season to give the Petes a 4-0 lead with seconds remaining in the game. Robertson picked up his second point of the night as Declan Chisholm got the secondary helper on the goal.

Final shots were 32-23 in favour of Peterborough, with the win ending Ottawa’s 17-game winning streak. Grondin, Robertson and Jones were named the game’s First Choice Haircutters first, second, and third stars of the game. The Mark’s Hardest Working Pete was Michael Little.