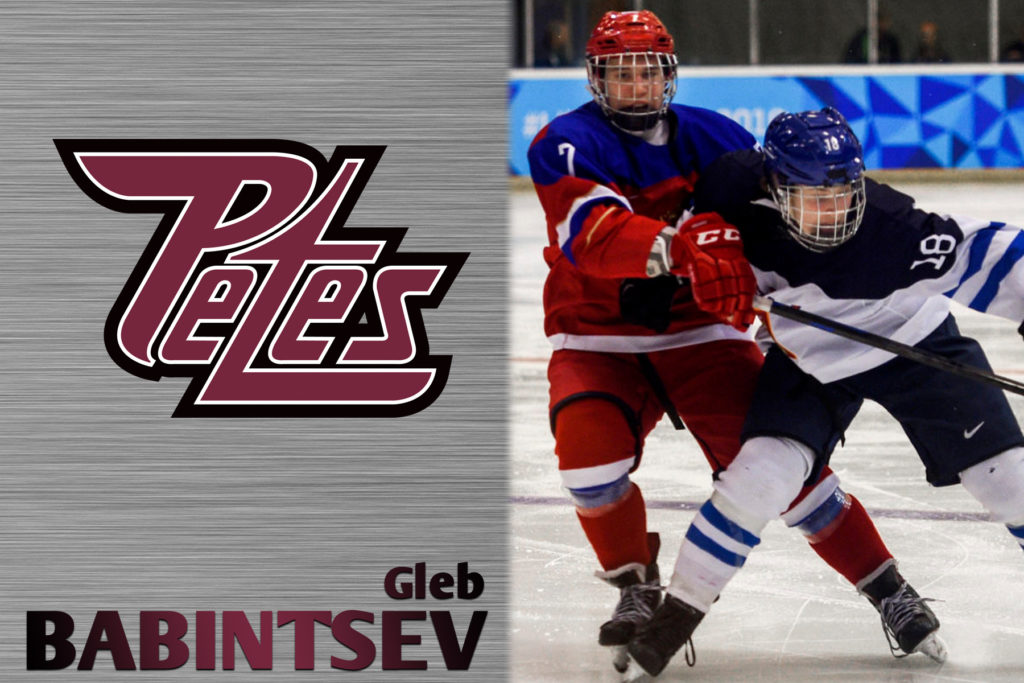 Babintsev was selected by the Petes in the first round, 37th overall in the 2017 CHL Import Draft. The 6’0”, 203lbs 2000-born defenceman played for Metallurg Magnitogorsk U17 in the Russia U17 league in 2016-17. He was the team’s top-scoring defenceman, recording 10 goals, 18 assists, 28 points, and 14 penalty minutes in 32 games. Babintsev has represented Russia internationally, winning bronze in the 2016 Youth Olympics. He will compete with Team Russia in the 2017 Ivan Hlinka Memorial Cup tournament in the Czech Republic and Slovakia beginning today.

With the 37th pick in the #CHLImportDraft, the Petes are proud to select D Gleb Babintsev (Russia)! pic.twitter.com/kHs7Ep9Ctz

“Gleb is a two-way defenceman that can contribute at both ends of the rink,” noted Oke. “He advances the puck up the ice well.”

“The Petes would also like to congratulate Gleb on being selected as a member of Team Russia for the prestigious Ivan Hlinka Memorial Cup,” added Oke. “His inclusion on this team speaks to his skills and abilities.”

“I’m very excited to join the Petes,” said Babintsev from Russia. “The OHL is a very good league that has great players that get drafted to the NHL. I’m looking forward to helping the Petes win a championship.”

Playoff and medal round games can be followed here.

The 2017-18 season begins with Training Camp in late August, which will include three exhibition games as part of a six-team HarborCenter OHL Showcase to take place from September 1 to 3 in Buffalo. The Petes will host one home game on Thursday, September 14 at 7:05pm against the Oshawa Generals.

The Petes will play their home opener on Thursday, September 21 at 7:05 pm against the Erie Otters.

Want to hear about more Petes contests and promotions? Join thousands of fans and stay up to date with the Petes by downloading the Peterborough Petes Mobile App, available for iPhone or Android devices.