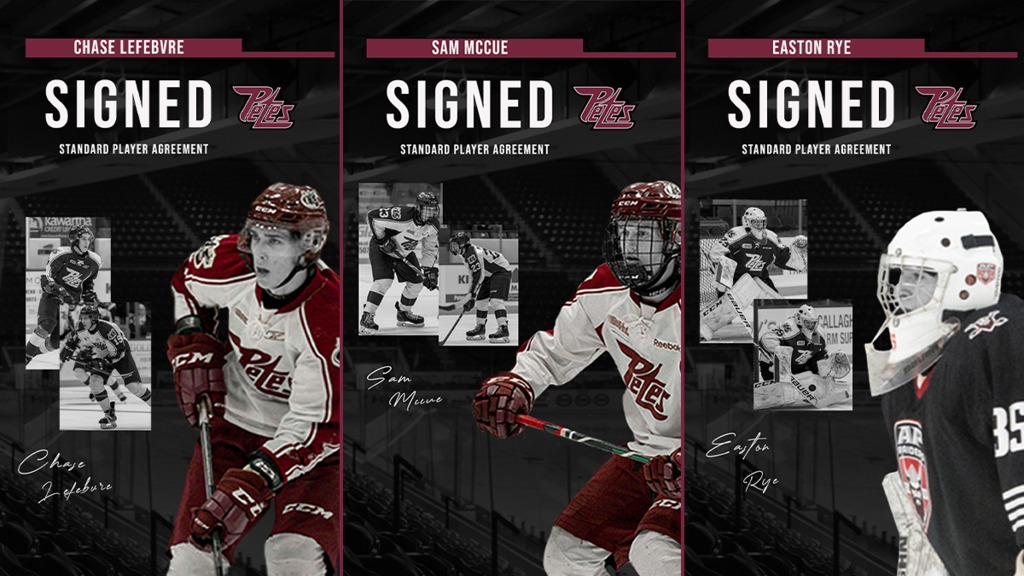 McCue was selected in the 7th round, 125th overall, by the Petes in the 2021 OHL Priority Selection. He split time between the Blind River Beavers and Peterborough Petes U18 AAA in 2021-2022. The 2005-born (late birthday) left winger is eligible for the 2024 NHL Entry Draft. He registered 21 points in 34 games last season.

Lefebvre was selected in the 15th round, 295th overall, by the Petes in the 2020 OHL Priority Selection. The Kincardine, ON natrive is eligible for the 2023 NHL Entry Draft. Lefebvre registered 66 points in 46 games for the French River Rapids of the NOJHL in 2021-22.

Rye was selected in the 5th round, 89th overall, by the Petes in the 2022 OHL Priority Selection Draft. The Peterborough, ON native is eligible for the 2025 NHL Entry Draft. Rye suited up for the Ajax/Picker Raiders in 2021-2022 playing 17 games and registering a 1.83 goals against average with 4 shutouts.

When asked about the new signings, Petes General Manager, Michael Oke, commented: “At the beginning of training camp, we told the players that all players invited to camp had a chance to make this team and these three players took advantage of that opportunity. We’re excited to have committed these players to the Peterborough Petes.”

The Petes will clash with the rival Oshawa Generals on September 4 at 2:05pm at the Asphodel-Norwood Community Centre in their first pre-season game of the 2022-23 season. Tickets are sold out, those who are unable to attend can watch live on the Petes Facebook Page.

Tickets for the other 2022 Petes pre-season home games are on sale now, with very limited quantities remaining for each of the off-site match-ups. Click here to learn how to purchase tickets for the pre-season games in Millbrook (September 10), and Cobourg (September 23).

Season Tickets are now on sale for the 2022-23 Petes season, starting at just $299+HST, Petes Season Ticket Members get access to all benefits and perks, for the lowest price. Season tickets available only while supplies last. To reserve your seats, call (705) 743-3681 ext. 6000 or email tickets@gopetesgo.com.

The Peterborough Petes are the oldest continuously operating team in the Ontario Hockey League, having won nine OHL championships and one Memorial Cup championship over 66 years. The Petes have graduated over 180 players to the National Hockey League. For more information, visit www.gopetesgo.com and follow the Petes on Facebook (facebook.com/petesOHLhockey), Twitter (twitter.com/PetesOHLhockey), TikTok (tiktok.com/@petesohlhockey) and Instagram (instagram.com/petesohlhockey).