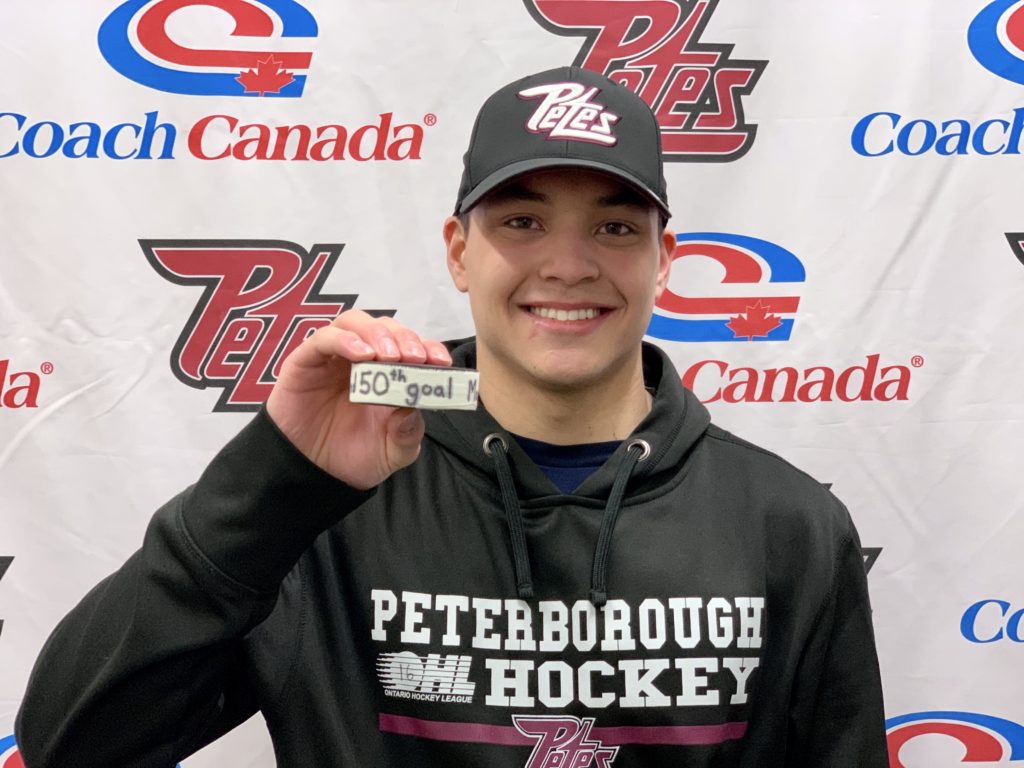 Nick Robertson netted a hat trick for 50 goals on the season and Hunter Jones stopped 27 shots for a career-high 29 wins to help Peterborough skate to a 6-1 victory in front of a rowdy crowd against the Barrie Colts on Sunday afternoon.

Before the game, the club recognized and expressed their thanks to all billet families who open their homes and hearts to Petes player each season.

We can never thank our billet families enough, but we were excited to honour and recognize them all ahead of this afternoon’s game!#GoPetesGo pic.twitter.com/8bUvaSOtZH

The matinee tilt began with lots of fast back and forth hockey as both teams kept the opposing goaltenders busy by generating scoring chances and firing shots on net. A zone breakout by Barrie led to the Petes finishing their checks, resulting in an interference penalty.

Moments after the Petes fifth ranked penalty killing unit successfully completed its first task, Josh Nelson solved Jones to open the scoring to silence the loud PMC. Tremendous pressure by the Petes moments after Nelson’s goal resulted in Barrie being whistled for high-sticking.

On the power play and seconds before the first period expired, OHL goal scoring leader Nick Robertson sounded the Petes goal horn as his lethal wrist shot beat Arturs Silovs to tie the game 1-1. Liam Kirk and Akil Thomas picked the helpers on Robertson’s 48th goal of the season.

ROBBY! A trademark wrister from @nickrob2001 on the power play gets the Petes on the board! @kirky_1424 and @AkilThomas2 set up the game-tying tally. 1-1!#GoPetesGo | #LeafsForever pic.twitter.com/U4OmRn1GnA

The first period of the matinee match up was heavily in favour of the Petes from a statistical point of view as Peterborough out shot Barrie 20-10 and dominated in the face off circle.

Lots of pucks fired in the first, but we’re all even on the board!#GoPetesGo pic.twitter.com/OwSHOSN1bk

Robertson started the second period the same way he ended the first period as he celebrated with 3,278 fans as his shot trickled past Silovs for a 2-1 lead. Rookie Mason McTavish decided that one goal wasn’t enough for Robertson this afternoon as he kicked the puck to him. David Maier picked up his career-high in assists (20) and points (20) with the secondary assist.

ROBBY! @nickrob2001 with a backhand beauty for goal 49 on the season to give us our first lead of the game! @masonmctavish27 and @david_maier17 combine for the assists. 2-1 Petes!#GoPetesGo | #LeafsForever pic.twitter.com/8Vr4Spst60

After successfully killing off a 5-on-3 and not scoring a breakaway earlier in the game, Brady Hinz redeemed himself when York made a tape to tape pass to him in the slot and made no mistake as he buried it deep in the net to extend the Petes lead 3-1.

The Lift Lock Lads were rolling after Hinz’s goal as Max Grondin extended the lead 4-1 when he roofed the puck past Silovs. Hinz picked up his second point of the night and Jacob Paquette received the secondary assist on the play.

Offensive pressure seconds after Grondin’s goal led to John Parker-Jones picking up his career-high seventh goal which gave Peterborough a comfortable 5-1 lead. Parker-Jones jumped on the loose puck out front and out-muscled Colts defenders, spun and fired the puck past Silovs.

BONES! @ParkerJones777 spins and shoots and SCORES in the @MaryBrowns Minute!

A four goal period gave Peterborough a 5-1 lead after 40 minutes of hockey inside the square corners. The Petes continued to dominate the Colts in shots, face off wins and on the score board.

Early in the period, York was whistled for interference but that didn’t phase the penalty killing unit as Robertson forced a turnover, skated to a breakaway and beat Greaves five-hole to complete his hat trick. Robertson scored his 50th goal of the season shorthanded to give the Petes a 6-1 lead.

5⃣0⃣ GOALS IN 4⃣3⃣ GAMES@nickrob2001 scores shorthanded, for the hat-trick, to become the first Pete in 27 years to score 50 goals in a season!#GoPetesGo | #LeafsForever pic.twitter.com/JJNSwzJTA7

Peterborough scored six unanswered goals to defeat the Barrie Colts in their only visit at the PMC this season and tied their season series 1-1.

The Peterborough Petes will battle the division rival Hamilton Bulldogs on Thursday, March 5 before taking on the Mississauga Steelheads on Saturday, March 7 for the final time this regular season. Both match ups start at 7:05 pm. The Petes will travel to the Meridian Centre on Sunday, March 8 for a 2:00 pm matinee tilt against the Niagara IceDogs.