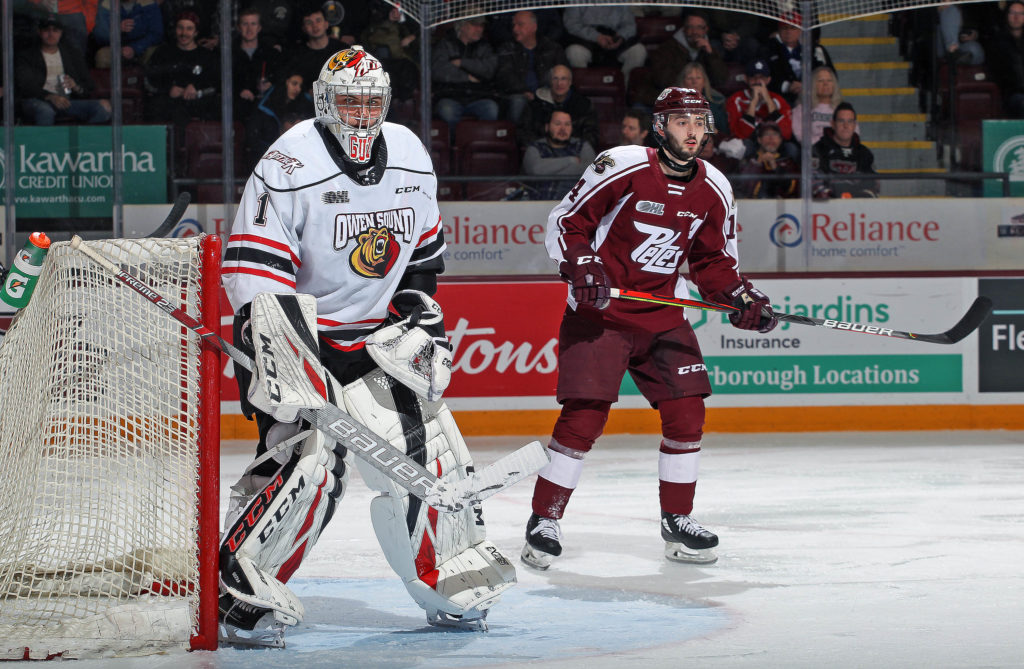 A three-goal first period performance helped the Petes stave off the Attack as the Maroon and White skated to a 5-3 win in Owen Sound on Saturday night.

Peterborough native J.R. Avon appeared to have gotten things started for the visiting Petes, but upon further review it was fellow rookie Tucker Robertson that got a stick on the game’s opening goal just 2:35 into the Saturday night action.

Liam Kirk, who has three points in three games since returning from injury, lit the lamp next for the Lift Lock Lads, finishing off a slick deke from Akil Thomas. The assist was Thomas’ 200th of his OHL career and 300th OHL point, with David Maier picking up an assist on the 2-0 goal as well.

While his recent goal streak was snapped at 14 games, Nick Robertson’s point streak was lengthened to 17 games as he was the next Pete to deposit the puck behind Owen Sound netminder Nick Chenard. While on their first man advantage of the night, Semyon Der-Arguchintsev centered a pass from the corner to Thomas who fed Robertson for a one-timer from the high slot.

To go along with their three-goal lead after twenty minutes, the Petes were also in control of the shot clock and face off circle.

The Attack came onto the ice for the second frame with vengeance, quickly getting themselves on the board. Brady Lyle, who is one of the league’s top scoring defencemen, walked the perimeter of the Petes zone with patience before firing a wrist shot past Hunter Jones. His unassisted tally cut Peterborough’s lead to 3-1.

Lyle’s goal would be the only marker in the second period as Peterborough killed off two consecutive penalties to keep the Attack from gaining more ground.

Hit a little bump on the road but we’re still in control 💪#GoPetesGo pic.twitter.com/mMg4tjiu5F

The Petes would go down a man early in the third before being afforded a four minute power play on which Zach Gallant was quick to capitalize. The overage captain polished off some precision passing from Mason McTavish and Thomas to restore their club’s three-goal lead.

GALLY! The captain @zachgally gets us back in front by 3 after finishing off a pretty PP passing play with @masonmctavish27 and @kirky_1424! 4-1 Petes!#GoPetesGo | #sjsharks pic.twitter.com/0aCtF2REBU

Owen Sound wasn’t done yet, as they’d score twice in the third stanza to try even the game’s score.

After exchanging coincidental penalties with the Attack, the Petes found themselves in the penalty box with less than two minutes left in regulation.

Having pulled Chenard for an extra attacker and 6-on-4 advantage, Owen Sound came within one when Barret Kirwin sent a McMaster past behind Jones with 52 seconds on the clock.

The Petes bench breathed a sigh of relief when Nick Robertson sailed a puck from the neutral zone into an empty Owen Sound net, securing Peterborough’s 5-3 win while overtaking the OHL’s goal scoring lead with 44 tallies in 39 games.

Final shots were 39-38 in favour of the Petes. Nick Robertson, Kirk, and Lyle were named the game’s First Choice Haircutters first, second, and third stars of the game, respectively.

The Petes host the Sudbury Wolves on Monday, February 17 at 2:05PM. Fans are invited and encouraged to bring their skates as the Petes will be hosting a free post-game skate following Monday’s Family Day game.