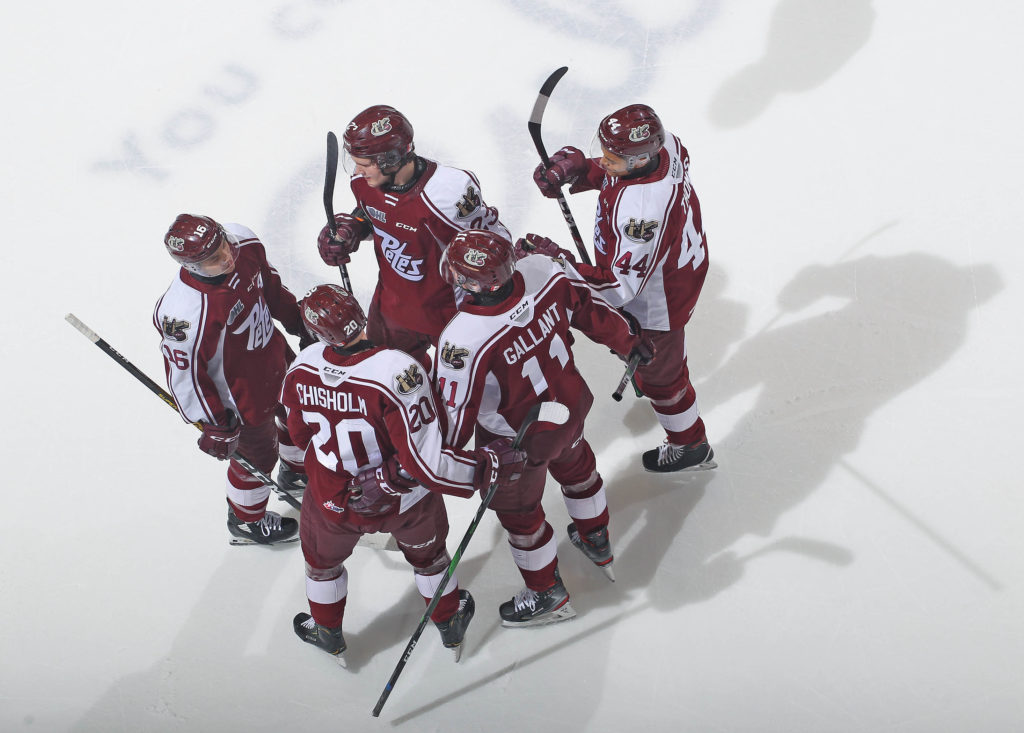 A five-point night (2G, 3A) from Nick Robertson and a multi-point game from four other players helped the Petes defeat the North Bay Battalion 8-3 at the PMC on Thursday night, sweeping the season series between the conference rivals.

Early in the first, both teams had their share of chances after trading power play opportunities, but both Hunter Jones and Cameron Lamour manned their creases to keep the game knotted 0-0. Halfway through the period, Toronto Maple Leafs prospect Nick Robertson picked up the loose puck in his own zone and the officials raised their arms to whistle Brandon Coe for tripping Robertson at centre ice.

While on the man advantage, and for the third straight game, Peterborough found the back of the net first when Declan Chisholm’s blast beat Lamour. Akil Thomas won the face off cleanly and Robertson made a pass to Declan Chisholm who blasted the puck past Lamour to notch his 10th goal of the season. Robertson and Thomas extended their point streaks to 14 and 13 games, respectively, on the night’s first goal.

The Battalion took two penalties against the seventh overall power play unit, but the boys in Maroon and White couldn’t convert before the period expired. The Petes out shot North Bay 12-10 and dominated in the face off circle.

When it looked like Peterborough was going to lengthen their lead, Alex Christopoulos silenced the Memorial Centre as he beat Jones to tie the game 1-1.

All 3,156 fans were loud again when Brady Hinz scored his 11th goal of the season. A point shot from Jacob Paquette hit a few bodies in front of Lamour and Hinz made no mistake on the door step as he roofed the puck to give the Petes a 2-1 lead. Captain Zach Gallant picked up his 23rd assist of the season.

The Lift Lock Lads began to roll when Mason McTavish netted his 28th goal of the season. Max Grondin made a nice drop pass to Robertson who was quick to pass the puck to McTavish. McTavish was even quicker as his one-timer beat Lamour.

Less than three minutes later, Robertson extended his goal scoring streak to 13 games to give the Petes a 3-1 lead. Robertson opened up ice for himself after he made a nifty move around a Battalion defender and sniped the puck past Lamour. McTavish and Paquette picked the helpers on the goal.

Robertson decided that one goal wasn’t enough when he out-skated a Battalion, lifted his stick and skated himself to a breakaway, eventually beating Lamour five-hole. Robertson’s second goal of the night, and his short handed marker, tied him first in OHL in goal scoring with 41 tallies.

ROBBY SHORTY!! @nickrob2001 with a burst of speed down the ice to beat Rose to the puck and deposits it behind Lamour! 5-1 Petes!#GoPetesGo | #LeafsForever pic.twitter.com/K4vxjl7u52

Just before the period expired, Paul Christopoulos, Alex’s twin brother, beat Jones as they were both battling the loose puck. P. Christopoulos’ goal cut the Petes lead to 5-2.

A fun, goal scoring period concluded as the Petes took control on the score clock 5-2 and continued to out shoot North Bay 30-19.

As soon as the puck dropped in the third, both Robertsons went to work and lengthened the Petes lead to 6-2. N.Robertson quickly entered the attacking zone and concluded a backhand pass to Tucker Robertson, where he scored his seventh goal of the season. Chisholm picked up the secondary assist on the play.

ROBERTSON ➡️ ROBERTSON! @nickrob2001 with a nifty backhand pass to @Robertson_62 who picks the top corner! @chis_decs with the second helper. 6-2 Petes!#GoPetesGopic.twitter.com/FaSYBCKm9o

The Maroon and White continued to roll when Thomas went forehand, backhand on a breakaway to give the Petes a 7-2 lead on his 100th OHL goal. Chisholm picked up his second assist of the night on the play.

The Battalion cut Peterborough’s lead to 7-3 when North Bay team leader Brandon Coe netted his 17th of his campaign. Simon Rose and Luke Moncada picked up the helpers.

It wasn’t long before the Petes answered Coe’s goal as McTavish beat Lamour glove side for his second goal of the night, and his 29th of his rookie campaign. Jack York and Thomas picked up the apples.

MASE! @masonmctavish27 gets goal two on the night with a wicked wrist shot from the slot! @Jack_york10 and @AkilThomas2 pick up the assists. 8-3 Petes!#GoPetesGo pic.twitter.com/8vcuuMAwJi

Final shots were 37-33 in favour of the Petes. Robertson, Chisholm, and Thomas were named the game’s First Choice Haircutters first, second, and third stars of the game, respectively. The Mark’s Hardest Working Pete was Michael Little.

The Petes wrap up the weekend on Saturday, February 8 when they host the league leading Ottawa 67’s at 7:05pm.