Petes swim to victory over Steelheads 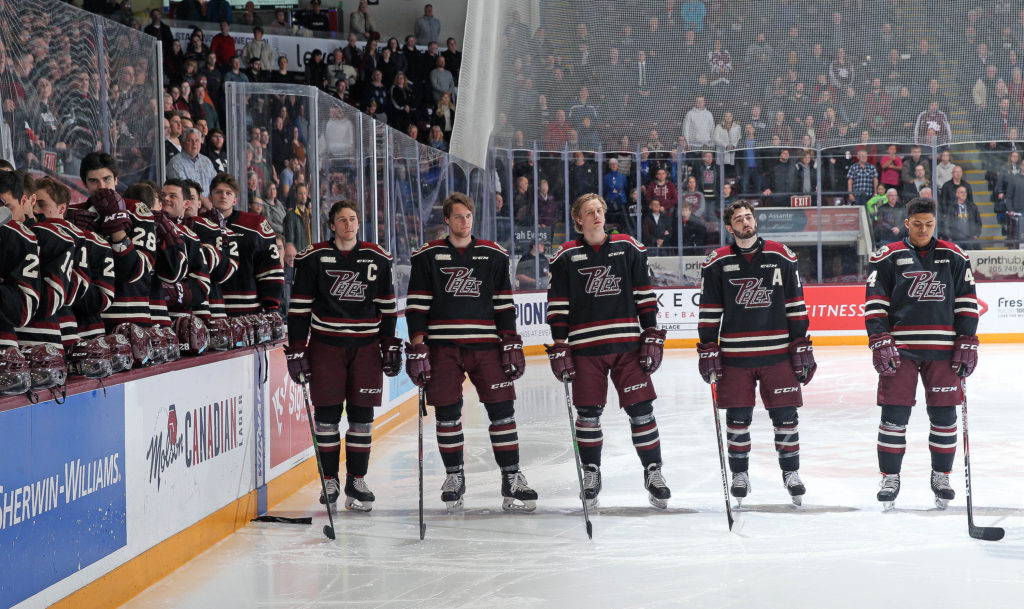 Toronto Maple Leafs prospect Nick Robertson scored his 52nd and 53rd goal and added two assists to contribute to a 5-1 win against the Mississauga Steelheads on Saturday night. Hunter Jones stopped 29 out of 30 shots faced to extend the Petes’ winning streak to three games.

Before the game got underway, the team recognized their three overage players – Zach Gallant, Jacob Paquette, and Hudson Wilson.

The opening minutes of the game were filled with lots of back and forth hockey. Peterborough was outshooting the Steelheads 7-4 and there were multiple scoring chances that had fans on their feet but Kai Edmonds kept his team in it.

Two penalty infractions 30 seconds apart by the Steelheads allowed the Petes’ fifth ranked power play unit to set up in Fish territory. After passing the puck around and keeping Edmonds busy, a cross ice pass from Semyon Der-Arguchintsev to CHL goal scoring leader Nick Robertson allowed him to fire the puck deep into the net for a 1-0 lead. Thomas picked up the secondary assist on Robertson’s 52nd goal of the season.

Moments later, the Petes and Steelheads traded penalties before the visitors were penalized for hooking. As a result, Peterborough’s 4-on-3 power play lineup had lots of extra ice and used that to their advantage. Robertson returned the favour and completed a cross ice pass to Thomas who made no mistake and beat Edmonds five-hole for a 2-0 lead. Der-Arguchintsev picked up his second assist of the night on Thomas’ 22nd of the year.

Robertson and Thomas’ power play goals just before the first period expired gave Peterborough a 2-0 lead. Strong performance from the Petes defenders as they only allowed the Steelheads to fire 5 shots.

The Petes goal horn was sounded early in the second when Der-Arguchintsev jumped on fellow linemate Robertson’s rebound for a 3-0 lead. Robertson picked up his third point of the night and Max Grondin was credited with the secondary assist on Der-Arguchintsev’s 10th tally of the campaign.

SEM! Make it goals in back-to-back games for @semder009 who jumps on a @nickrob2001 rebound to make it 3-0 Petes! @GrondinMax grabs the second assist.#GoPetesGo | #LeafsForever pic.twitter.com/ioR4tNFvev

Peterborough continued to gain momentum when John Parker-Jones completed a pass to former Steelhead Michael Little, who then fed the puck to Declan Chisholm. The Winnipeg Jets prospect took his time before firing his shot past Edwards for his career-high 12th goal and to give Peterborough a comfortable 4-0 lead.

Peterborough doubled up on the Steelheads in the second for a 4-0 lead while out shooting 20-14 and continued to dominate in the face off circle.

It wasn’t until early in the third period that the Steelheads solved Jones. Keean Washkurak completed a breakout pass to Steelheads leading scorer Cole Schwindt, who used his speed and eventually beat Jones to cut the Petes lead 4-1.

The Steelheads’ goal didn’t slow down Robertson as he picked up the loose puck in his end, skated to a two-on-one with Der-Arguchintsev, and sent all 3,135 fans cheering as his shot beat Edmonds blocker side.

ROBBY! @nickrob2001 breaks out down the ice and beats Edmonds five-hole for his second of the night and 53rd of the season! 5-1 Petes!#GoPetesGo | #LeafsForever pic.twitter.com/c13IKKsdwD

With a 5-1 win, Peterborough evened their season series with Mississauga, knotting it 2-2.

Finals shots were 31-25 in favour of the Steelheads. Robertson, Der-Arguchintsev, and Thomas were named the game’s First Choice Haircutters first, second, and third stars of the game, respectively. The Mark’s Hardest Working Pete was Jacob Paquette.

The Peterborough Petes will wrap up their weekend at the Meridian Centre for a 2:00 pm matinee tilt against the Niagara IceDogs on Sunday, March 8. The Petes return to the PMC on Thursday, March 12 to battle the Sudbury Wolves for the final time this season. Puck drops at 7:05 pm.