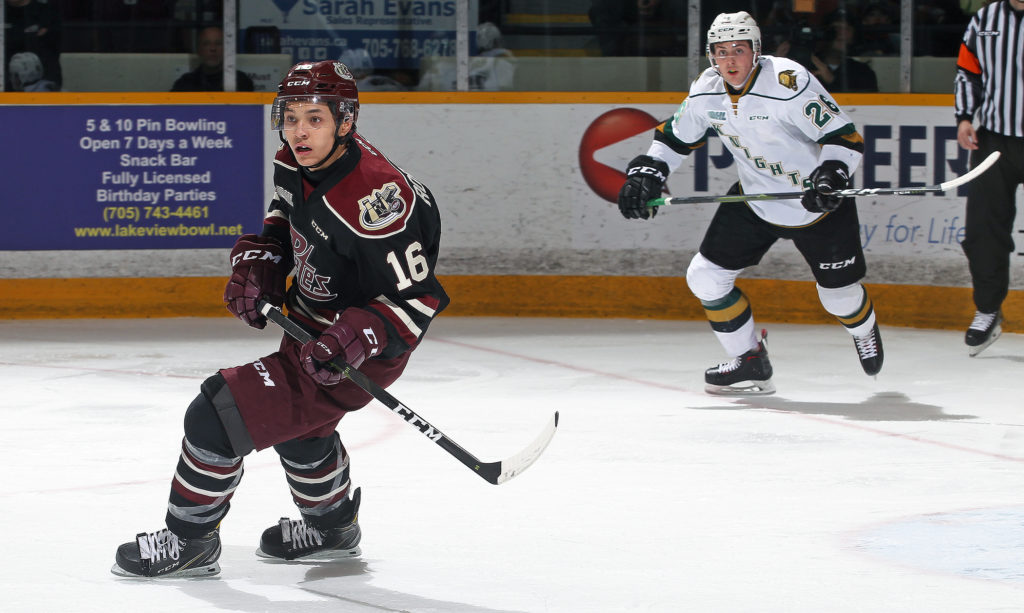 The Peterborough Petes, officially back in their classic Maroon and White threads, took down the country’s top ranked Knights 6-4 in a full Budweiser Gardens on Friday night in London.

The Petes were afforded two early power play opportunities. Liam Kirk had his team’s best chance on the man advantage, but the visitors couldn’t convert on either chance.

Soon after returning to full strength, London would crack the scoreboard at Budweiser Gardens to take a 1-0 lead. Defenceman Hunter Skinner beat Hunter Jones high on his glove side with a shot from the blue line off a feed out of the slot from Antonio Stranges via Matvey Guskov at 15:53.

The Petes responded quickly, though, jumping ahead 2-1 before the period ended.

Sophomore winger Dustin Hutton scored Peterborough’s first goal of the 2019-20 regular season that was initiated by a great effort by John Parker-Jones to keep the puck in the zone. Mason McTavish recorded his first point OHL point with a shot from the slot that bounced out to Hutton at the side of the net at 18:46.

Twenty-three seconds later, Brady Hinz was forced along the far boards to shoot from a sharp angle but found the back of the net with a high wrist shot. David Maier, who the Petes selected in the 2019 CHL Import Draft, registered his first point as a Pete, with Max Grondin picking up an assist as well.

A solid lead on the score and shot clocks was held by Peterborough as the teams headed off for the first intermission.

A wild couple of final minutes in the first frame, but we like it!#GoPetesGo pic.twitter.com/cVVLzZbtWk

The Petes were assessed their first infraction of the evening as Jacob Paquette was sent off for high sticking. A strong penalty killing effort by Peterborough held London to just two shots, and no goals, on their first power play.

Two goals in the second half of the middle stanza secured a 4-1 lead for the Petes.

Kirk, an Arizona Coyotes prospect, notched his first of the year by one-timing a feed out of the corner past Jordan Kooy. Future Maple Leafs Semyon Der-Arguchintsev and Nick Robertson connected in the corner to assist on the 11:40 marker.

CRACKIN’ FINISH KIRKY 🇬🇧 @kirky_1424 finishes off a passing play from SDA and @nickrob2001 to extend our lead to 3-1!#GoPetesGo pic.twitter.com/XShgwkPFtv

Robertson then scored a goal of his own 1:58 later. The California native started the play in the neutral zone then dished the puck to a trailing Der-Arguchintsev. The puck was passed to Maier in the circle before making it’s way back to Robertson’s stick and into the back of the London net.

TIC. TAC. ROBBY GOAL! @nickrob2001 starts and finishes the play and buries it into the open cage. Some pretty passing courtesy of @david_maier17 and SDA. 4-1 Petes!#GoPetesGo pic.twitter.com/6StnSJvboN

Peterborough was sitting comfortably with a three-goal lead despite trailing in shots and face off percentage through two periods.

Couple of dents in the Knights’ armour after 40.#GoPetesGo pic.twitter.com/qJukB635gv

The third frame saw the clubs exchange goals back and forth until the final buzzer.

With Chad Denault in the box for a check from behind, Connor McMichael made quick work of his club’s odd man advantage, scoring just six seconds into their second power play of the game. The Washington Capitals prospect, who just returned from DC yesterday, finished a play by teammates Josh Nelson and Jonathan Gruden to cut into Peterborough’s lead at 5:04 in the third, bringing the score to 4-2 for the Petes.

Robertson quickly restored the three-goal margin for the Lift Lock Lads after jumping on his own rebound. Der-Arguchintsev and Maier once again shared assists.

Skinner netted his second of the game off of a slap shot from the point after being fed a pass from the near corner by Guskov, with Luke Evangelista earning the second helper on the goal that brought the score to 5-3.

The goal exchange continued with Denault hitting the score sheet. Grondin gloved down an arching puck and made quick pass to Denault who wired a wrist shot past Onuska at 12:50.

DENNY! @GrondinMax gloves down a loose puck and dishes to @Denault17 and we’re ahead by 3 – again!#GoPetesGo pic.twitter.com/U17rKGuzYc

The last tally of the game, assisted by McMichael, came from Campbellford native Nathan Dunkley. The late effort brought London back within two goals.

The Knights pulled Onuska to add an extra attacker, but the 6-4 score would be final.

Final shots were 35-23 in favour of London, with Jones making 29 saves.

The Petes are back in action Saturday night as they visit the Windsor Spitfires at 7:05pm.