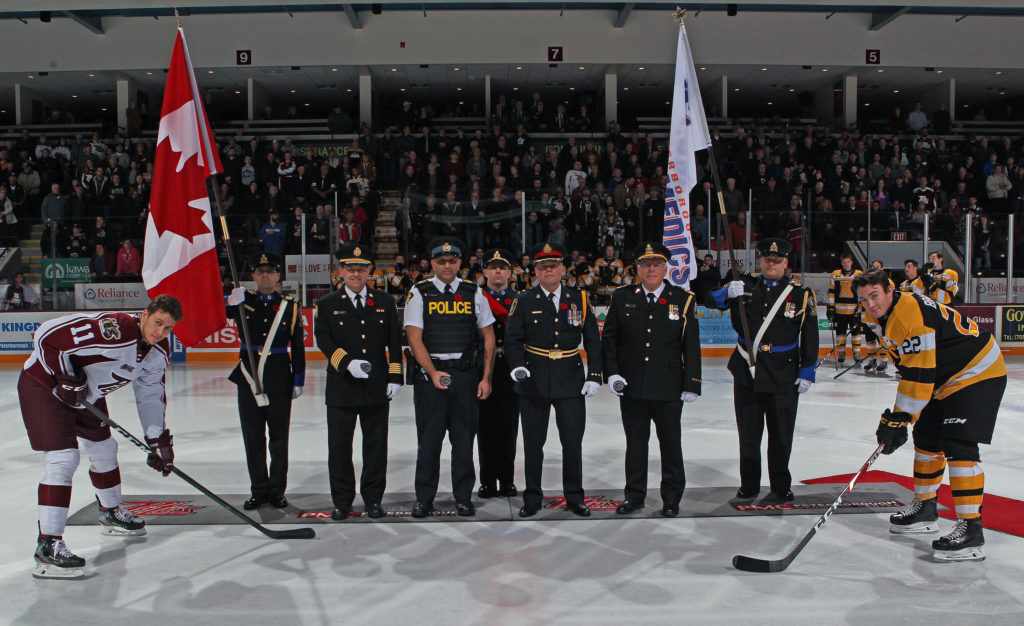 A rare Tuesday game at the Peterborough Memorial Centre brought the Kingston Frontenacs to town for the first match up of the season between the divisional rivals. A strong third period lifted the maroon and white to a 5-3 win over a fledgling Frontenacs club.

The night kicked off with pre-game ceremony that recognized local first responders including police, fire, and EMS services.

After numerous chances throughout the opening period, the Petes finally caught a break as Liam Kirk’s pass found John Parker-Jones alone in the slot. Parker-Jones’ wrist shot beat Bonello low blocker side as his second goal of the season opened the game’s scoring. Max Grondin picked up his seventh assist of the season as he was credited with the secondary assist on the play.

BONES! A nice feed out of the corner from @kirky_1424 finds @ParkerJones777 in the slot and he beats Bonello!#GoPetesGo pic.twitter.com/TE4df37JzP

Peterborough’s lead was short lived as the Frontenacs responded just over two minutes later. Former Pete Dustin Hutton forced a turn-over at the blue line which created a 3-on-1. As Hutton skated closer to tonight’s starter, Hunter Jones, he passed the puck to Jake Murray, who beat Jones low blocker side to tie the game 1-1.

What worked once worked again as Arizona Coyotes prospect Kirk picked up the loose puck in Kingston’s zone and passed it to Grondin as the Petes used the exact same set-up as the first goal. Grondin’s wrist-shot beat Bonello high blocker side as his fourth goal of the season gave the Petes a 2-1 lead. Kirk picked up his second assist of the night on the goal.

GORDO! @kirky_1424 sets up the exact same play, this time to @GrondinMax to make it 2-1 Petes!#GoPetesGo pic.twitter.com/R22ixQupyc

Not only did the Petes have the lead after the first period, but they also led in the shot column as the opening period came to an end.

The Frontenacs came out flying as the visiting team’s goal and point leader Zayde Wisdom’s wrist shot beat Jones to tie the game 2-2 less than a minute into the second period.

Not long after Wisdom’s goal, the Petes fifth overall penalty killing unit were tasked to killing a 5-on-3.

As the Black and Gold had the man advantage, it was Nick Wong who beat Jones to give them a 3-2 lead early into the second period. Wong’s sixth of the season was assisted by Vitali Pinchuk and Campbellford native Jakob Brahaney.

On the power play, Grondin entered the zone using his speed and made a cross-ice pass to Brady Hinz, who was all alone out front. Hinz took advantage of the open net and put it past Bonello as his fifth goal of the season tied the game 3-3. Hinz’s power play goal was assisted by Grondin, who picked up his second assist and third point of the night.

With the late goal, the score was tied at 3 and the Petes continued to dominate in the shots category, 31-19.

Head Coach Rob Wilson’s intermission speech worked as the mighty maroon and white took a 4-3 lead less than two minutes into the third period. Captain Zach Gallant’s original shot hit the post and bounced to Hinz, who netted the game winning goal and his second of the night. Shawn Spearing earned his third assist of the season on the goal.

Rookie Keegan McMullen decided that a one goal lead wasn’t enough as his back hand gave the Petes a 5-3 lead early in the third period. Import David Maier’s long tape-to-tape pass found McMullen, who tallied his second goal in two games.

MULLEY! A loooong pass from @david_maier17 connects with @McMulley17 for his second goal in as many games! 5-3 Petes!#GoPetesGopic.twitter.com/s8mhy1fZ5E

With a minute remaining in the game, the Frontenacs opted to pull their goalie for an extra attacker but it was too late as the Petes won 5-3.

Peterborough continued to lead in the shot department with 47 and the Frontenacs had 28 shots. The Petes were 1/5 on the power play and 3/4 on the penalty kill.

The Petes will face the Frontenacs again this Friday, November 8 in Kingston at Leon’s Centre at 7:00PM. The Petes will have a Remembrance Day ceremony on Sunday, November 10 at 2:05PM as the Petes look to defeat the Ottawa 67’s for the third time this season.