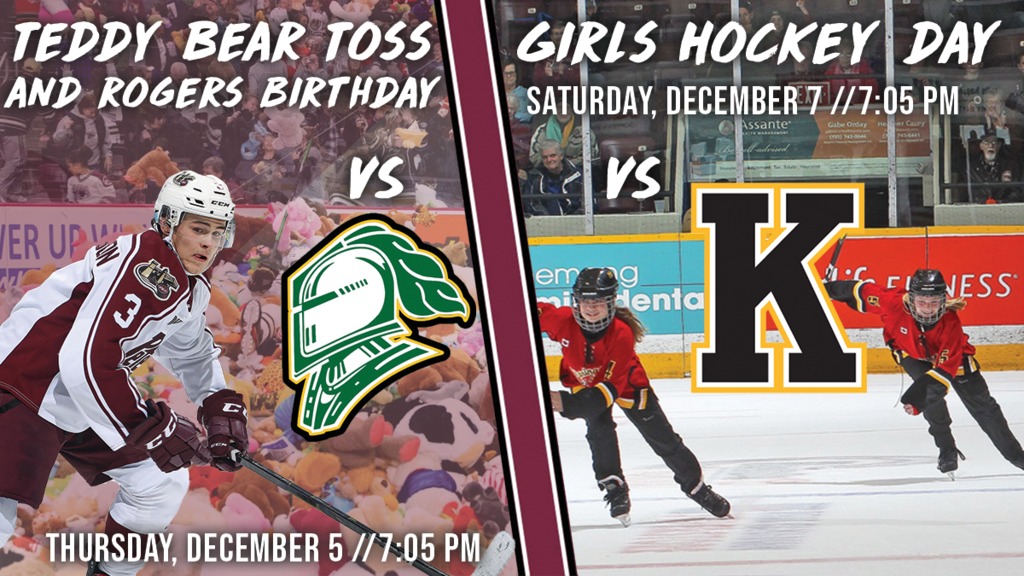 The Petes are on home ice twice this weekend, first hosting the Western Conference-leading London Knights on Thursday for the annual Teddy Bear Toss before welcoming the division rival Kingston Frontenacs on Saturday for Girls Hockey Night.

When the Petes score their first goal of Thursday’s game, which is sponsored by Pure Country 105, fans will be invited to throw their new stuffed toys, toques, or mittens onto the ice. At that time, volunteers from local minor hockey teams will help collect the toys from the ice, which will be counted and delivered by Winslow-Gerolamy Motors Limited to the Miracle Toy Drive.

The first intermission contest will give a lucky fan the chance to win tickets to an Ottawa Senators game.

During the game the Petes will also be celebrating team mascot Roger’s ninth birthday. While teddy bears are picked up, fans will be encouraged to sing Happy Birthday to everyone’s favourite mascot. Roger will also be in the PMC’s east lobby pre-game signing autographs and taking photos with fans. In honour of Roger’s birthday, Lakeview Bowl will be offering fans a buy one get one free promotion for a game at Lakeview Bowl. The national anthem will be performed by Orono Public School

Saturday night the Petes and Tim Hortons will host Girls Hockey Night, celebrating the accomplishments of minor girls hockey teams. Throughout the game keep an eye out for special messages from some female hockey legends.

Following in his father's footsteps: Andrew & Jacob Verner
14 hours ago