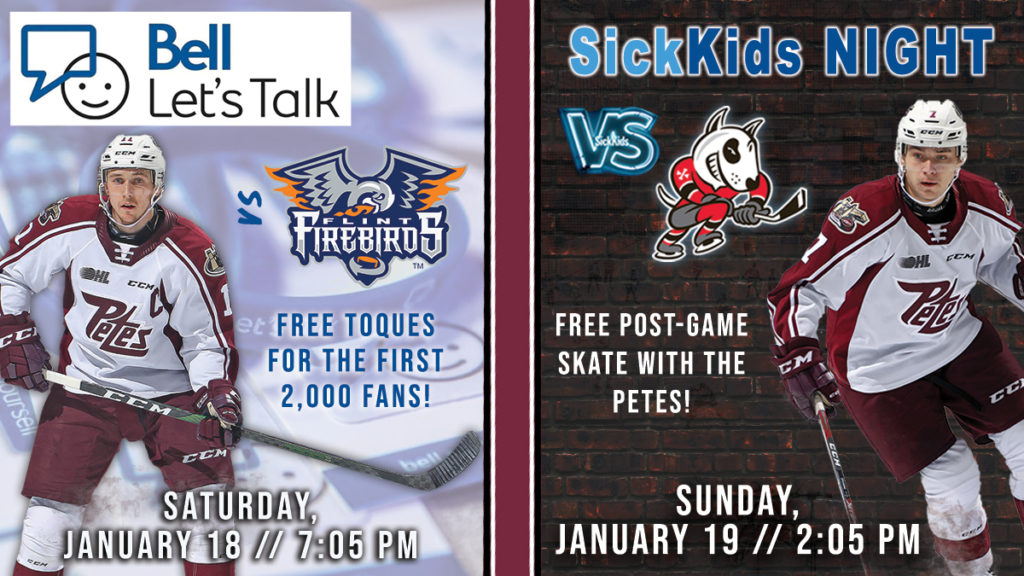 The Peterborough Petes will play back-to-back home games for the only time this season as both the Flint Firebirds and Niagara IceDogs make the trip to the Lift Lock City.

On Saturday at 7:05pm the Petes will recognize the tenth anniversary of Bell Let’s Talk and engage in open discussion about mental health, encouraging mindfulness and promoting simple ways to join the conversation about mental health. The first 2,000 fans who enter the PMC will receive a toque courtesy of Bell Let’s Talk. They will also be handing out clappers to fans who visit their booth.

Bell Let’s Talk Day is January 29
Bell will donate 5 cents to Canadian mental health programs for each of the following interactions, at no extra cost to participants beyond what they would normally pay their service provider for online or phone access:

The Peterborough Pop Ensemble will be singing the national anthem and will performing a tribute to Barb Monahan, a Petes fan and founder and director of the ensemble who passed away late in 2019.

The Ennismore Eagles IP Gold will take to the ice for a mini-game, while Champions Cheer Gym will host a second intermission chuck-a-puck with a gift basket up for grabs for the winner.

On Sunday afternoon at 2:05pm, the Petes will welcome the Niagara IceDogs for SickKids Night for a makeup game, previously scheduled for December 14. The match up marks the first time that Akil Thomas will face his former team since being acquired by the Petes last week.

A pre-game ceremony will feature Oliver, a young boy from Peterborough who has been treated at SickKids with a severe form of Osteogenesis Imperfecta (brittle bone disease), and his family.

During the first intermission of the game Wawanesa, who is the sponsor for the afternoon’s game, will be hosting a remote control car race for a few lucky fans in attendance. In the second intermission, fans can purchase a chuck-a-puck in support of SickKids.

Tickets for this game and all regular season home games are available through the PMC Grant Thornton Box Office in person and over the phone at (705) 743-3561 Monday to Friday from 9:30am to 5:00pm, and 24 hours a day online.

Now is the time for Petes fans to use their Holiday Flex Packs. If you have yet to get your hands on this great package – which includes 4 ticket vouchers for any January home game, two Petes mugs, and an autographed program for $59.99 – contact the Petes office at 705-743-3681 or visit The Petes Store.