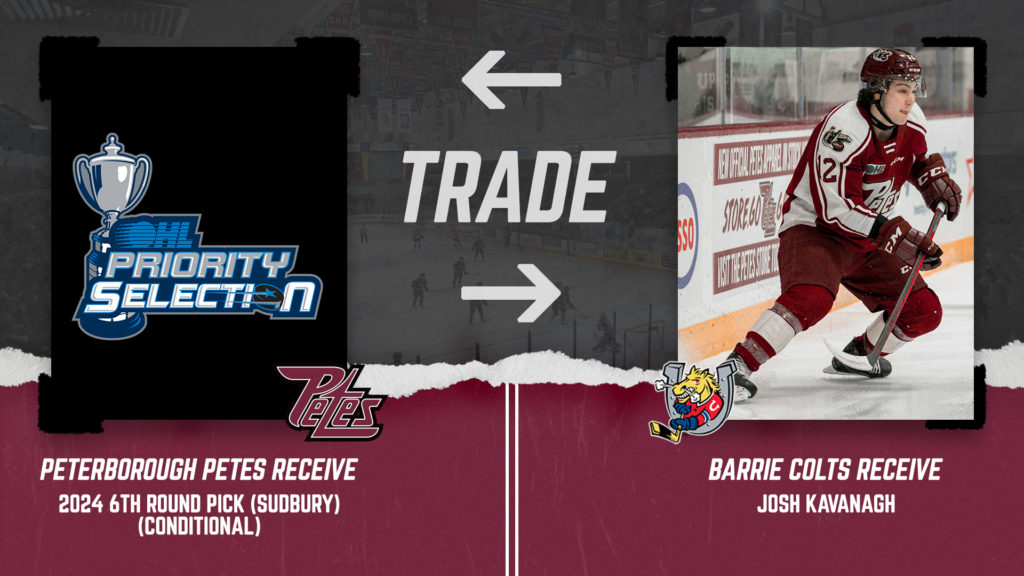 General Manager Michael Oke announced today that the team has acquired a conditional 6th round draft pick (Sudbury) in the 2024 OHL Priority Selection from the Barrie Colts in exchange for Josh Kavanagh.

Kavanagh, a 2003-born defenceman, was selected in the fifth round, 93rd overall by the Petes in the 2019 OHL Priority Selection. The 6’0”, 180 lbs Hanmer, ON native has recorded 23 goals, 3 assists and 5 points in 60 career games with the Petes. In his first season in Peterborough, Kavanagh was a leader on the Peterborough Petes U18 AAA team that was ranked number one in Ontario during the 2019-20 season, recording 6 goals and 16 assists for 22 points in 31 games.

“Although never easy to see a player like Josh leave our organization, we felt this was a good move both for Josh’s development, and for the future of the Petes,” commented Oke. “On behalf of the team, I’d like to thank Josh for his commitment to the Petes, and to both the Peterborough community and specifically the local Indigenous communities that he has become an active advocate for during his time with the team. We wish him all the best next season and beyond.”

If Kavanagh plays in at least one OHL regular season game during the 2023-24 season, Peterborough will instead receive Oshawa’s 5th round pick in the 2024 OHL Priority Selection.

Petes Season Tickets are now on sale for the 2022-23 Petes season, starting at just $299+HST. Season Ticket Members get access to all benefits and perks, for the lowest price. Season tickets are available only while supplies last. To reserve seats, call (705) 743-3681 ext. 6000 or email tickets@gopetesgo.com.