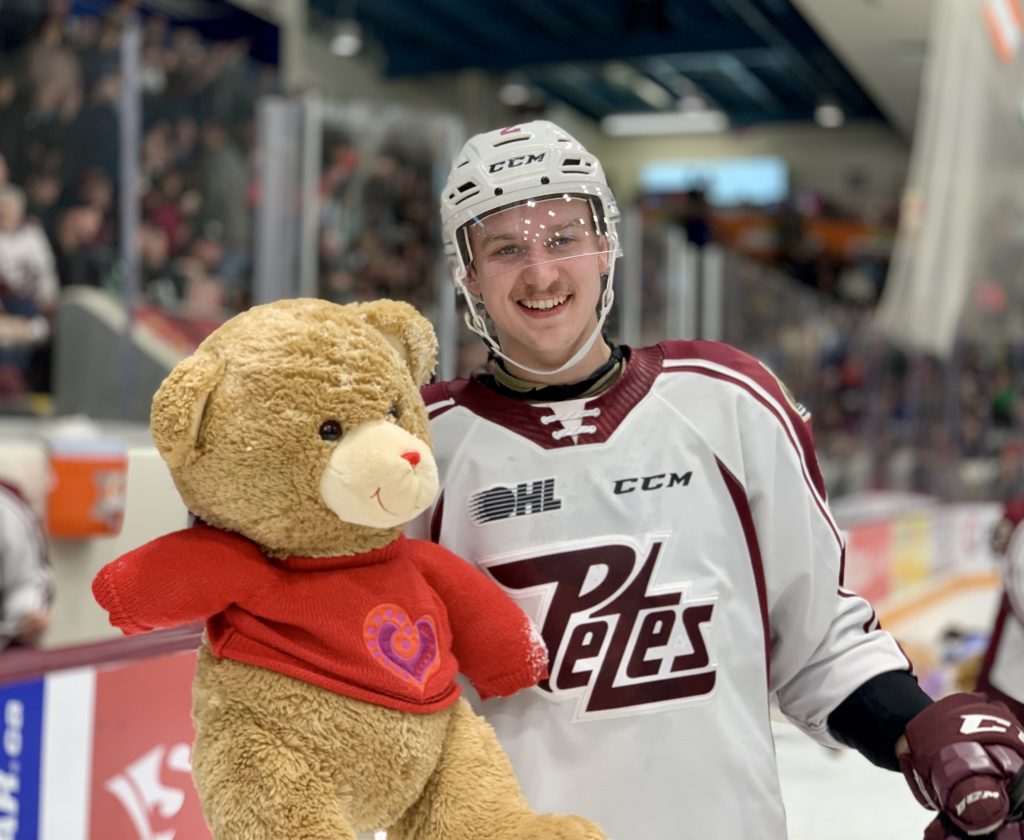 A three point effort from Liam Kirk and a goal and assist from a rehabbed Nick Robertson lifted the OHL-best Petes over the Western Conference-leading London Knights 3-2 on Thursday night. The club’s 20th win marks Peterborough’s second defeat over the Knights this season, and fourth straight Teddy Bear Toss victory.

Peterborough wasn’t off to the start they were lookingg for as they found themselves killing two separate penalties early in the game, but the fifth overall penalty killing unit continued its success.

The Petes had numerous chances as the first period concluded, with Hunter Jones standing tall to 13 shots through the opening 20 to keep the game tied 0-0.

Halfway through the second, Hudson Wilson’s point shot hit a Knights player and bounced past goalie Dylan Myskiw. The play was orchestrated after Semyon Der-Arguchintsev won the face off in the offensive zone and Liam Kirk picked up the loose puck before he made a pass to Wilson. Wilson sent the teddy bears flying as his first as a Petes was also the first goal of the game.

🧸HUDSON WILSON SENDS THE FUR FLYING!🧸 London scores on their own net but @hudson_wilson18 is the last Pete to touch the puck! @kirky_1424 and SDA assist! It’s 1-0 Petes!#GoPetesGo pic.twitter.com/RRvo9u215D

Thanks to the generosity of Petes fans, over 1,600 teddy bears and winter clothing items were collected for the Pure Country 105 Miracle Toy Drive.

Thank you, Petes Nation, for your generous donations to this year’s @PureCountry105 Miracle Toy Drive! pic.twitter.com/jHGt6DORPJ

After missing 10 games, Nick Robertson scored on Kirk’s rebound to give the Petes a 2-1 lead before the second period ended. Robertson’s 20th goal of the season was assisted by Kirk and Der-Arguchintsev picked up his second point of the night.

ROBBY! After missing 10 games, @nickrob2001 buries a @kirky_1424 and SDA rebound to get us back in front! 2-1 Petes!#GoPetesGo | #LeafsForeverpic.twitter.com/ucjOw0aYVP

After trading goals with the Knights, the Petes led in the shot column, in face offs and on the score board.

This is a fun one so far, folks. We’re ahead by 1 after 40 minutes!#GoPetesGo pic.twitter.com/YonN5qbJgq

The Petes were off to a rough start in the third period, but after successfully killing a 5-on-3, the Maroon and White’s power play took the ice as Dunkley was called for a hooking infraction.

Halfway through the third, Stranges netted his second of the night to reduce Peterborough’s lead to one goal. Former Pete Ryan Merkley got the lone assist on the play.

With 1:37 left to play, the Knights pulled their goalie for the extra attacker, but it wasn’t enough as the Petes won the the second straight game against London, 3-2.

Final shots were 34-32 for London, with Jones making 32 saves in his league leading 17th win of the season.