Petes wrap up first half with win over rival Generals 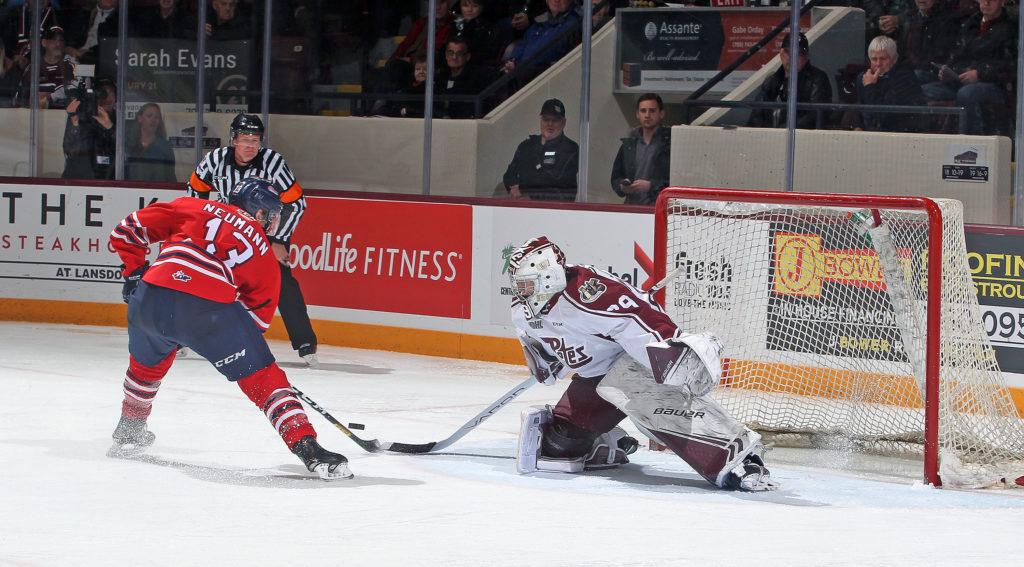 The Peterborough Petes became the first OHL club to reach 50 points in the standings after defeating the Oshawa Generals 4-1 on Thursday night, taking a 3-0 series lead against their storied rivals.

It was a quiet first period other than a penalty for each team but it was the Generals’ second infraction that sparked the league’s fifth overall power play.

On the man advantage, 2020 NHL Draft eligible forward Cameron Butler deflected Declan Chisholm’s shot from the blue line. Chisholm picked up his league leading 32nd assist among defenceman and extended his point streak to six games. Tucker Robertson picked up the secondary assist on the game’s first goal and Butler’s 10th of the season.

Hunter Jones remained calm and collective as he stopped six shots to protect the mighty Maroon and White’s 1-0 lead after 20 minutes.

Our special teams doing work in the first 💪#GoPetesGopic.twitter.com/nBtTzIn39f

The Petes weren’t off to the best start in the second as a slashing infraction against Peterborough led to the Generals tying the game 1-1.

Moments later, a scary hit against Chisholm led to a boarding penalty against Oshawa.

On the power play, Captain Zach Gallant’s feed found Liam Kirk’s stick as he put it past Zachary Paputsakis for a 2-1 lead. Semyon Der-Arguchintsev picked up his team leading 37th assist on Kirk’s 16th goal of the campaign.

WELCOME BACK KIRKY 🇬🇧 @kirky_1424 finishes off a pretty power play pass from @zachgally, and some hard work from SDA, to get us back in front! 2-1 Petes!#GoPetesGo | #Yotes pic.twitter.com/2iB8it3dcA

The Petes kept pressuring their biggest rival on the power play which led to Gallant tallying his 17th of the season to give the Petes a 3-1 lead. The San Jose Sharks prospect’ss second point of the night was assisted by Der-Arguchintsev and Chisholm, who both picked up their second assists of the match.

AYE AYE CAPTAIN! @zachgally fires the puck from the slot past Paputsakis on the man advantage to extend our lead to 3-1! Second assists of the night for SDA and @chis_decs.#GoPetesGo | #SJSharkspic.twitter.com/TlBXLhEHvt

The Petes took control of the game and looked to close out the Generals for the third time this season as they led 3-1 heading into the second intermission.

Taking advantage of the man advantage.

Up by ✌️ through 4⃣0⃣!#GoPetesGopic.twitter.com/S72bk7JUlY

It was a quiet third period even though the Generals had two penalty shots, but Jones manned the crease and turned away both opportunities to protect the Maroon and White’s two-goal lead.

With over three minutes remaining in the game, the Generals opted to pull Paputsakis which led to Chisholm scoring, with a broken stick, from his own end to put this game away 4-1.

Final shots were 30-28 in favour of the Petes. Jones, Gallant, and Chisholm were named the game’s First Choice Haircutters first, second, and third stars of the game. The Mark’s Hardest Working Pete was Cameron Butler.

The Petes will head home for the holidays to rest before kicking off the second half of the season on December 28 at 7:05pm when they host the reigning OHL Champion Guelph Storm.