Petes Wrap Up Weekend with a Win over Kingston 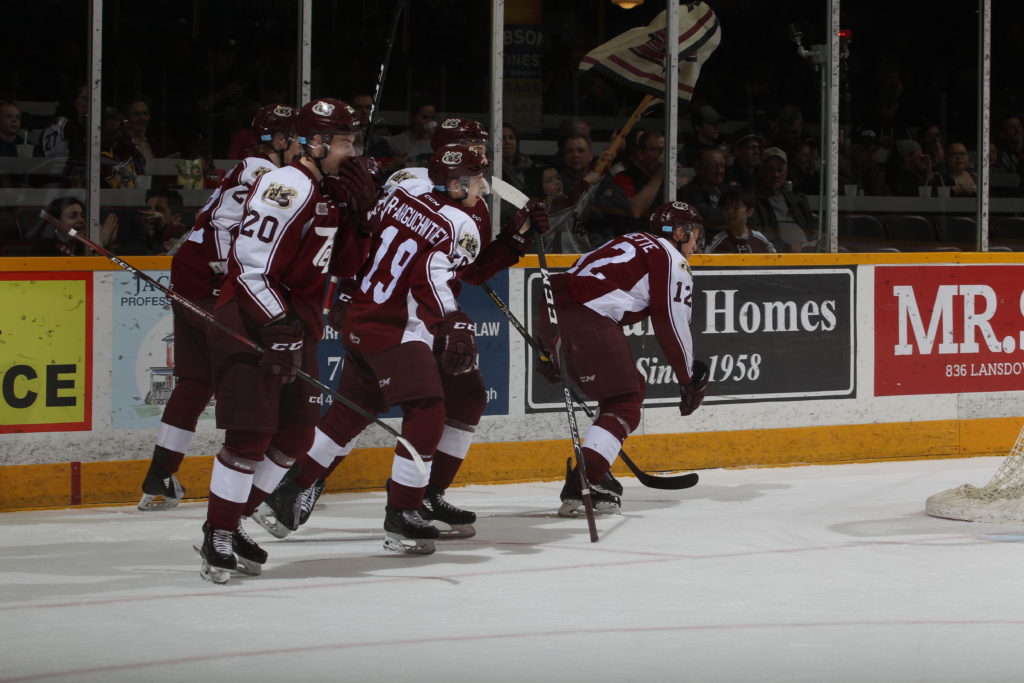 It was an important game for the home team at the Peterborough Memorial Centre as the Petes played host to the Kingston Frontenacs for a Sunday afternoon tilt.

At the end of the day the Petes would win by a score of 4-1.

The Petes had a number of different opportunities in the opening period to take the lead. Finally at the 12:32 mark of the period that the Petes took the lead on the power play.  Semyon Der-Arguchintsev made a nice pass through the seam to Chris Paquette. who scored his 25th goal of the season. Micheal  Little would also be credited with an assist on the Kingston natives goal.

This was the only goal of the first period. The Petes would lead in both shots and goals after the first. Shots were 16-13 and the score was 1-0.

Up by 1 after 1 thanks to the Kingston native 👌#GoPetesGo pic.twitter.com/UVx5QE0Cu7

In the opening minute of the second period the Fronts would get on the scoreboard to tie the hockey game. Zayde Wisdom would shoot the puck from the point and it would find his way past Petes goaltender Hunter Jones.

Both teams traded chances throughout the period, but with just over seven minutes remaining in the period the Maroon and White would retake the lead. Brady Hinz would finish off a rebound that was let out by Fronts goaltender Marshall Frappier. The assist on the goal would be credited to Matt McNamara.

The Petes were gifted a five-on-three later in the period as the Fronts took a pair of penalties. On that opportunity, Captain Zach Gallant tipped in a point shot from Ryan Merkley. Nick Robertson also assisted on the play. It was now 3-1 for the Petes. This assist was Merkley’s 150th career Ontario Hockey League point.

The second period would end 3-1 in favour of the Petes.

Contributions throughout the lineup – 8 different Petes have points through 40 minutes!#GoPetesGo pic.twitter.com/q3sZvonQOj

In the third frame it was more of the same, as captain Gallant tallied career point #100 after receiving a beautiful pass from Little. Hinz also received an assist which was also his 100th career OHL point. The Petes now led by a score of 4-1.

This is how the game would end as the Petes would pick up a huge two points.

Gallant would be named the first star of the game, while Jones, who made 33 saves, picked up second star honours. The third star was Wisdom from Kingston. The Marks Hardest Working Player of the Game would be awarded to Paquette of the Petes.

The Petes will hit the highway for three games next weekend, visiting the Windsor Spitfires, Flint Firebirds, and Saginaw Spirit. They will return home next Thursday March 7 to play the Kingston Frontenacs once again. It’s a 7:05pm start. Tickets are available through the Baker Tilly Box Office in person, over the phone at (705) 743-3561, and online.