The Petes close out their season with three games this in three days this weekend, kicking off with a Thursday night tilt with the North Bay Battalion.

The Battalion are coming off back-to-back games against the Sudbury Wolves, who shut out the Petes 4-0 on Sunday. The Wolves and Troops claimed one game each in the weekend series. 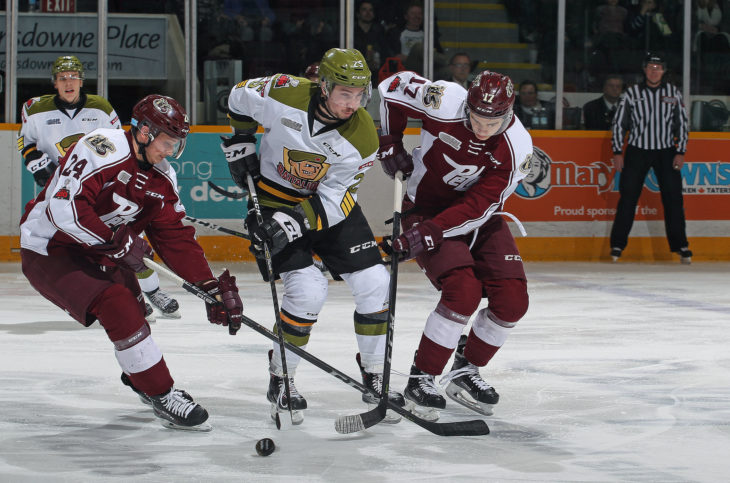 The squads have seen each other three times this season, with the first two games taking place in North Bay. The Petes took a commanding 7-3 win over Thanksgiving weekend, while the Battalion took January 14’s match up 4-3 following a shootout. The first game between the teams at the PMC was a 4-3 OT win for the Petes on February 10. The maroon and white swept the season series against the Troops last season, and over the past five seasons have compiled a 12-5-0-2 record made up of 7 wins and 2 losses at the PMC.

Justin Brazeau leads the Troops offensively in the 2017-18 campaign, having registered 39 goals, 35 assists, and 74 points in 65 games. The 1998-born right winger is undrafted, but has attended camps with the Columbus Blue Jackets and Detroit Red Wings. Bowmanville native Luke Burghardt isn’t far behind Brazeau, tallying 27 goals, 42 assists, and 69 points in 65 games.

Leading North Bay’s blue line is Swedish import Adam Thilander. The play-making rearguard has 12 goals, 30 assists, and 42 points in 35 games. Overage defenceman and Lindsay native Jesse Saban has had the best season of his career, collecting 3 goals, 21 assists, and 24 points in 65 games; his previous personal best was 13 points in 62 games with the Hamilton Bulldogs during the 2015-16 season. 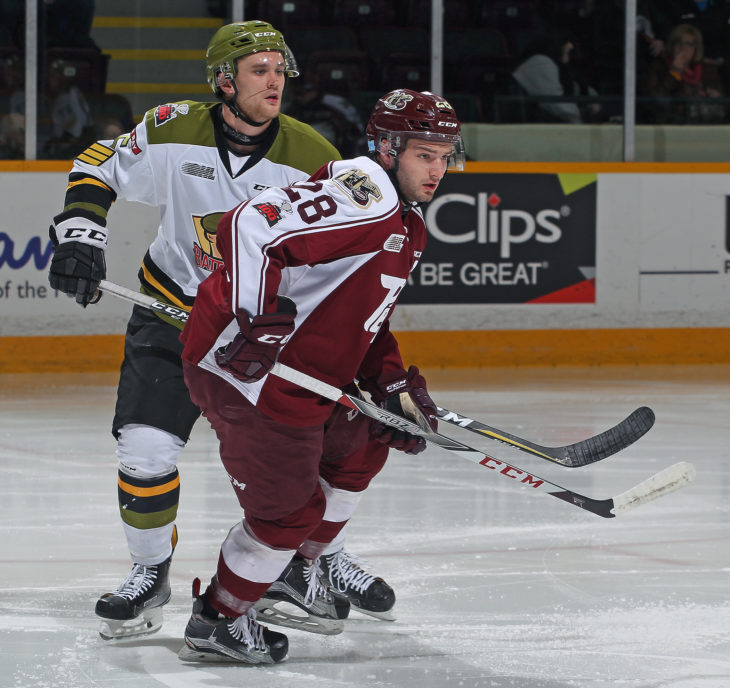 Before the game, the Petes will recognize their billet families for their contributions to the organization.

Trans Canada Nissan is proud to sponsor Thursday’s game, and invite fans to fill out a ballot at their table in the arena’s north lobby before the game for the chance to participate in a Shoot to Win contest. If the lucky contestant can score 17 goals on 20 shots or less in 20 seconds, they’ll take home a Nissan Qashqai courtesy of Trans Canada Nissan.

Thursday’s game is being played in support of the Down Syndrome Association of Peterborough. Fans in attendance can support the organization through a second intermission chuck-a-puck.

Before the chuck-a-puck, local atom hockey players will participate in the final round of the Reliance Minor Hockey Skills Program challenge, with the fastest player taking home the first annual championship trophy.

Upon exit from the game, fans will receive a $10 Skip the Dishes coupon.

The national anthem will be performed by Heather Cadigan.

Join the Petes for their final two games of the season with a Petes Playoff Push Flex Pack, that gives fans four regular bowl tickets to use at either game, along with a voucher for four popcorns and four pops, for just $69.99 (a $124 value). Visit Steve at the ticket tent in the North Lobby, visit the Box Office, or call (705) 743-3681 ext. 263, to get your package.