The maroon and white will be looking to even the season series between the squads after going 3-4-0-0 in previous meetings this season. The Petes won three of the first four games, but the Fronts have taken the last three, including a narrow 2-1 victory on February 16 in Kingston. Two of Peterborough’s three wins over the black and gold came on home ice.

The Fronts are the hottest team in the Eastern Conference, having lost just one game in regulation in their last ten.

Solid goaltending has propelled the Fronts to third in the OHL’s Eastern Conference, and just four points out of first place. Carolina Hurricanes prospect Jeremy Helvig has been a workhorse for Kingston, appearing in 48 of their 57 games. In a 6-1 performance against the Kitchener Rangers on Sunday, February 18, he became the winningest Frontenacs goalie as he recorded his 76th win. Helvig is the league’s second-ranked netminder with a 27-13-5-3, 2.55 goals against average, and league-leading 0.920 save percentage. He’s appeared in six of Kingston’s seven games against the Petes, posting a 2.05 goals against average and 0.937 save percentage. 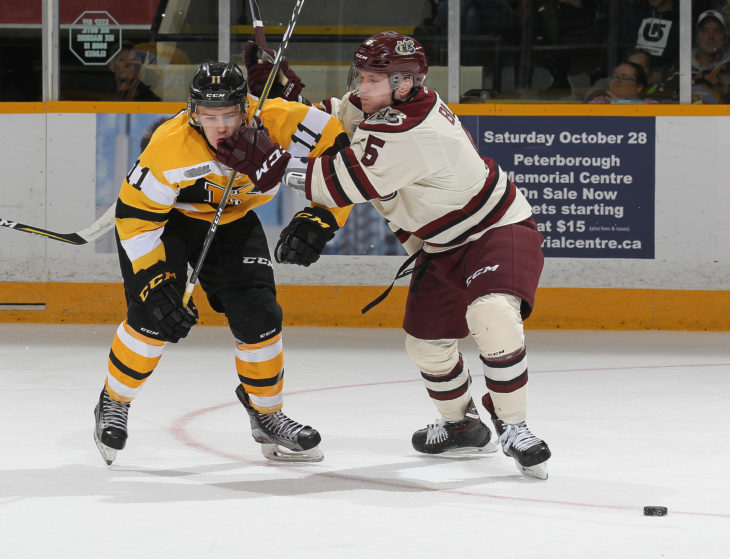 Overage centre Ted Nichol holds the longest current points streak of all Frontenacs at five games in which he’s collected three goals, four assists, and seven points. Linus Nyman has points in 12 of his last 13 games, amassing 14 goals, 6 assists, and 20 points, including the game winning goal on February 16 and 1 assist against Peterborough in that span.

The Petes will be facing some of the league’s best in Kingston’s special teams. They hold the top ranked overall and road power play efficiencies, and the penalty kill is second overall and sixth on the road.

Off the ice, it’s the annual Talk Today game night, an initiative by the Ontario Hockey League and Canadian Mental Health Association presented by Teachers Life that provides mental health support to players and raises awareness about mental health and suicide prevention throughout communities across the OHL. Fans can support the CMHA Haliburton, Kawartha Pine Ridge Branch through a second intermission chuck-a-puck in which they’ll have the chance to win a first place prize of a $50 President’s Choice gift card and $25 Cineplex gift card, and a second place prize of two tickets to an upcoming Petes game and a $25 Petes Store gift certificate.

Our Talk Today initiative with @cmhahkpr & @TeachersLifeCAN continues! We’re taking the mental health conversation into the community with our annual #TalkToday game tomorrow at 7:05pm vs Kingston!

Tickets for the game are still available, starting from $8.