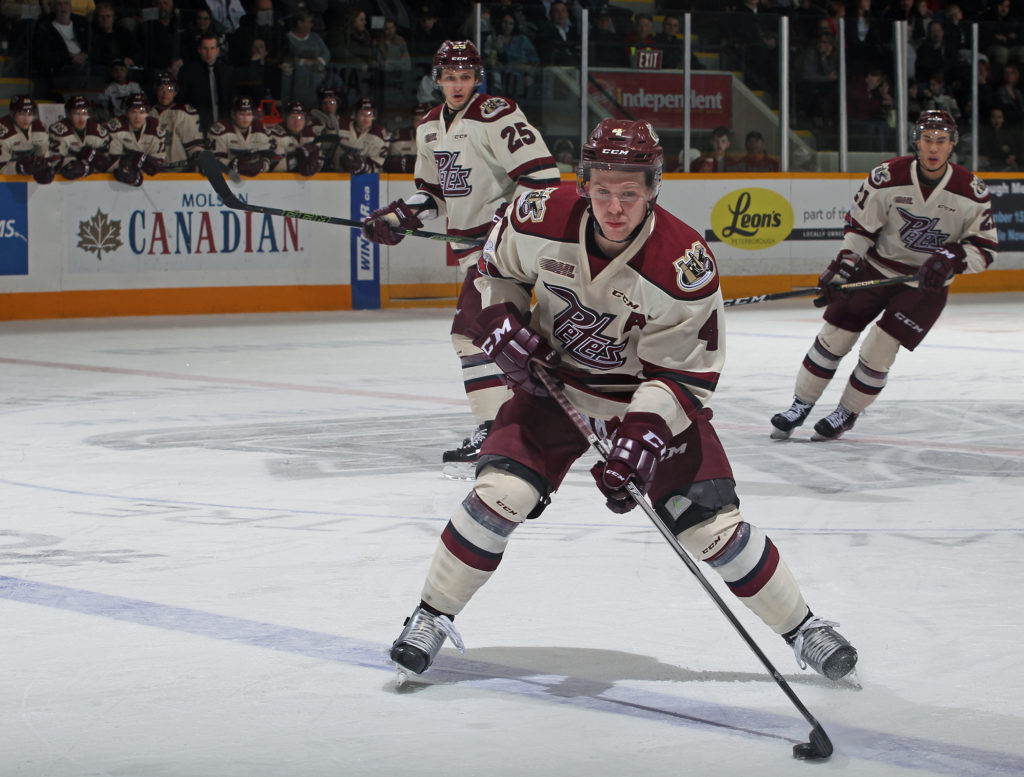 For the first time this season, the Petes battled back from a third period deficit for a win on Thursday night against the Sudbury Wolves. Peterborough will look to take the momentum from that win and translate it into two more points on Friday night in London.

After starting the season as the OHL’s worst-performing team, London seems to be returning to form as a contender. They have climbed to .500, and sit eighth in the Western Conference. The Knights are lead by a mass of scoring at the top of their depth chart, with only six players having scored 10+ points on the season. The Petes, on the other hand, have been relying on a larger core, with 12 players showing double-digits in the points column through 29 games.

This depth has been crucial as the Petes continue to battle for a second consecutive East Division title, as the squad has been riddled with injuries through the first half. Standout rookie Nick Robertson is still on the mend, while high-end NHL draft prospect Declan Chisholm suffered an ankle injury on Thursday night, which could see him out for an extended period.

The Petes in the lineup will be excited to battle against former teammate Tyler Rollo, who was acquired by the Knights in a trade in October. Rollo started the season with five points in three games for the Petes, but the feisty forward has contributed only 7 points in 19 games in London.

Are we done here? pic.twitter.com/a3wdkrpAnv

Matt Timms will also need to step up his game, with Chisholm – another offensive-minded defenceman – out of the lineup, Timms must continue to play a leadership role, but also lead by example on the ice.

The Petes have one road win against Western Conference opponents this year (Windsor), and only had two last season. With a record of 4-4-0-0 against the Knights in the last five seasons, Peterborough will look to make a statement on Friday night.

Also on the line for the mighty maroon and white is an 11-game winning streak in the month of December. After going 10-0-0-0 in December 2016, the Petes haven’t lost in the twelfth month since New Year’s Eve, 2015.

The Petes will finish their South-Western Ontario road trip with a game against the Sarnia Sting on Saturday, December 9 at 7:05pm. The Petes will play their final home game before Christmas on Thursday, December 14  at 7:05pm against the Ottawa 67’s. Next Thursday’s game is Star Wars night – be sure to wear your favourite costume and bring the force.

Looking for the perfect holiday gift for the hockey fan in your life? Petes Holiday Flex Packs are now on sale! Receive four regular bowl flex vouchers to be used between December 30 and January 20, as well as two Petes rocks glasses for just $59.99, a savings of over 40%.