The Mississauga Steelheads visit the PMC for the second time this season on Thursday, March 8 at 7:05pm in what will be the final of four match-ups between the squads. The game is do or die for the Petes, as a Steelheads win would secure Mississauga’s postseason berth, eliminating Peterborough from playoff contention.

The Steelheads are coming off a 7-2 win over the Erie Otters on Sunday. Meanwhile, the Petes gave up a 4-3 loss to the London Knights last Thursday before dropping games against the Otters and Niagara IceDogs on Saturday and Sunday. 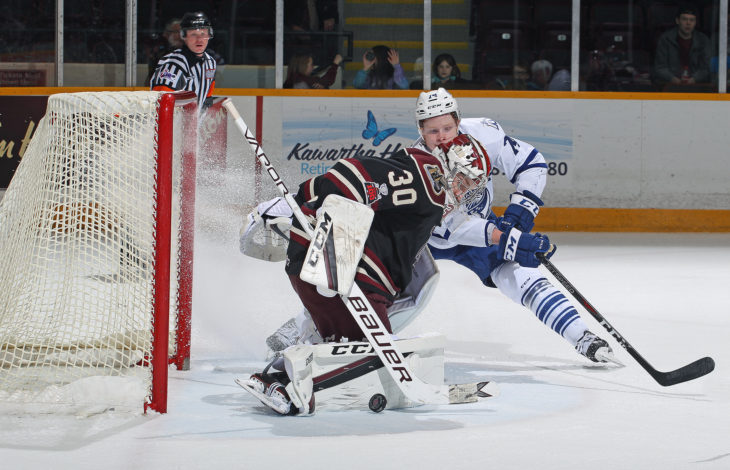 The Petes took their last meeting with the Steelheads by a score of 6-1 on February 15, having given up a 9-2 loss in early November, and a much closer 4-3 overtime loss in late January to the same Fish.

The Steelheads, who are 5-4-1-0 in their last ten games, have 5 players who have cracked the 50-point mark on the season – Nicolas Hague, Peterborough native Owen Tippett, Ryan McLeod, Albert Michnac, and Mathieu Foget; both Hague and Tippett have broken 60 points, as well.

Vegas Golden Knights prospect Nicolas Hague has registered the most points for his club versus Peterborough this season. One of four OHL defencemen that leads his team in scoring (GUE – Ryan Merkley; LDN – Evan Bouchard; SAG – Marcus Crawford), Hague has put up 32 goals, 37 assists, and 69 points in 61 games, placing him 2nd in league scoring among rearguards and 18th overall. He recorded 1 assist against the maroon and white on February 15, 1 goal and 2 assists in Mississauga on November 5, and an additional 2 assists at the Hershey Centre on January 26. Hague has also scored the fifth-most power play makers (14) and fired the eighth-most shots on goal (245) over the course of the season. That he has the fifth-most penalty minutes (95) in the OHL makes his offensive statistics that much more impressive.

Mississauga has had solid goaltending from their tandem of Jacob Ingham and Emanuel Vella. Ingham has appeared in 40 games and has compiled a record of 14-21-0-2, while Vella is 15-9-0-0 with 28 appearances with wins in his last 4 starts. Ingham is the third-ranked North American goalie in the latest NHL Central Scouting rankings ahead of the 2018 NHL Entry Draft.

CARSTAR Peterborough is proud to sponsor this week’s game. Over the past few months, CARSTAR has been repairing a Dodge Grand Caravan that, during Thursday’s first intermission, will be donated to Big Brothers Big Sisters of Peterborough to assist the agency in delivering and supporting their programs.

Thursday’s game is being played in support of the YWCA Peterborough Haliburton and International Women’s Day. Fans in attendance can support the YWCA through a second intermission chuck-a-puck and will have the chance to win a Cineplex gift card, McDonald’s gift card, and YWCA camping chair and blanket.

The national anthem will be performed by Peter Gauthier.

Support the Petes as they battle for a postseason position. Tickets are available starting at $8 through the Collins Barrow PMC Box Office, online, or by phone at (705) 743-3561.

Looking to catch more Petes hockey in March? The brand new Petes Playoff Push Flex Pack gives fans four regular bowl tickets to use at any game in March, along with a voucher for four popcorns and four pops, for just $69.99 (a $124 value). Visit Steve at the ticket tent in the North Lobby, visit the Box Office, or call (705) 743-3681 ext. 263, to get your package. 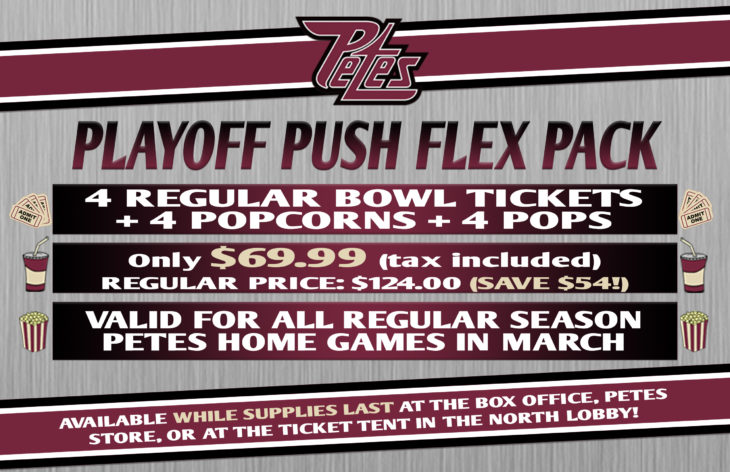