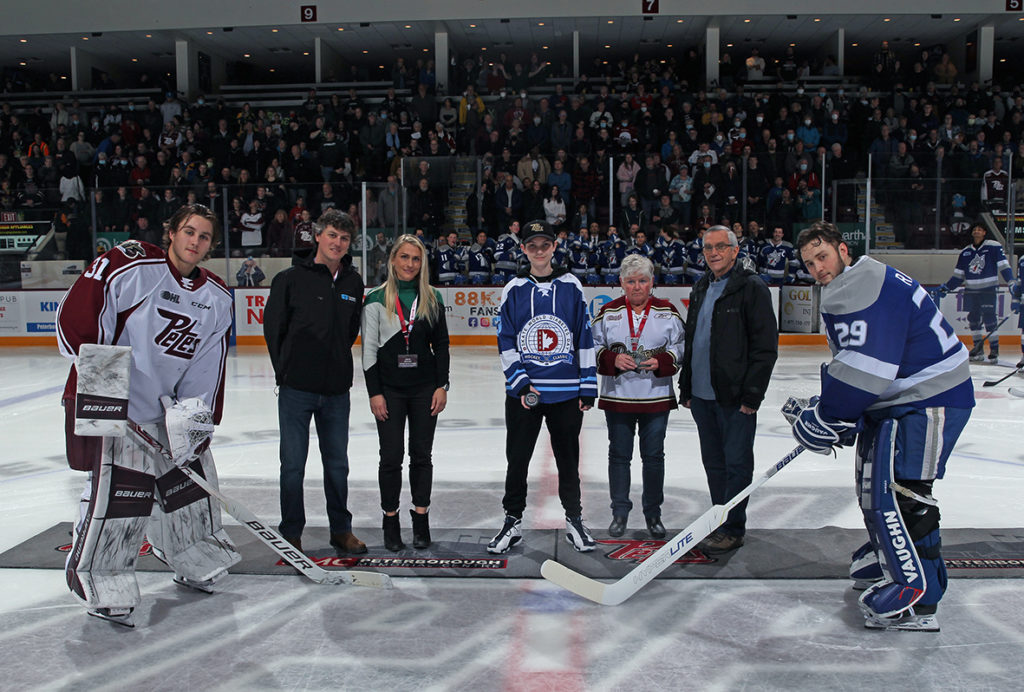 It was Diabetes Night presented by Tandem Diabetes Care on Thursday as the Petes welcomed the Sudbury Wolves to the PMC. The Petes were looking to make it three wins in a row after defeating the Oshawa Generals and Mississauga Steelheads last week. Michael Simpson, who lives with Type-1 diabetes and led the charge for Diabetes Night, had the start in net for the Petes fresh off of being honoured as the OHL Goaltender of the Week. The Petes along with Tandem Diabetes Care raised a total of $7,869 on the night to send local children to Diabetes Canada D-Camps.

The first started off strong for the Petes, as only four minutes into the game Tommy Purdeller scored his fourth goal of the season to give the Petes an early 1-0 lead. The Wolves would come right back, as only 9 seconds later a dump in would come right in front of the net for Evan Konyen to score his fifth goal of the season to tie the game at 1-1. Half way through the frame Sahil Panwar scored his fifth of the year to give the Petes a 2-1 lead. The game would stay that way heading into the break.

Sudbury came out strong to begin the second and would tie the game 3:58 into the period on a goal by David Goyette. Three minutes later Tommy Purdeller scored his second of the game to give the Petes the lead. The Petes would add some insurance with 4 minutes remaining, as Connor Lockhart would put one past Wolves goalie, Joe Ranger, to extend the lead to 4-2. Once again, the Wolves would come right back as 31 seconds later Nick DeGrazia scored to cut the Petes lead to 4-3. The Petes would hold the lead and take it into the third period.

The final frame began the exact same way as the second, as Evan Konyen scored 3:58 into the period to tie the game at 4-4. It would stay that way until 12:12, when Evan Konyen would complete the hat trick to give the Wolves their first lead of the game. Sudbury would extend their lead two minutes later when Alex Pharand scored to make it 6-4 Wolves. The Petes would pull their goalie late, but would be unable to answer as the Wolves took this one 6-4.

Tommy Purdeller led the way for the Petes with two goals and an assist. Sahil Panwar and Connor Lockhart each had a goal, J.R. Avon added two assists. Michael Simpson had 27 saves in the loss.

The Petes will travel to Oshawa tomorrow night to take on the rival Generals for the second time in two weeks. Puck drop is scheduled for 7:35PM. You can catch the game on YourTV and Freq 90.5.