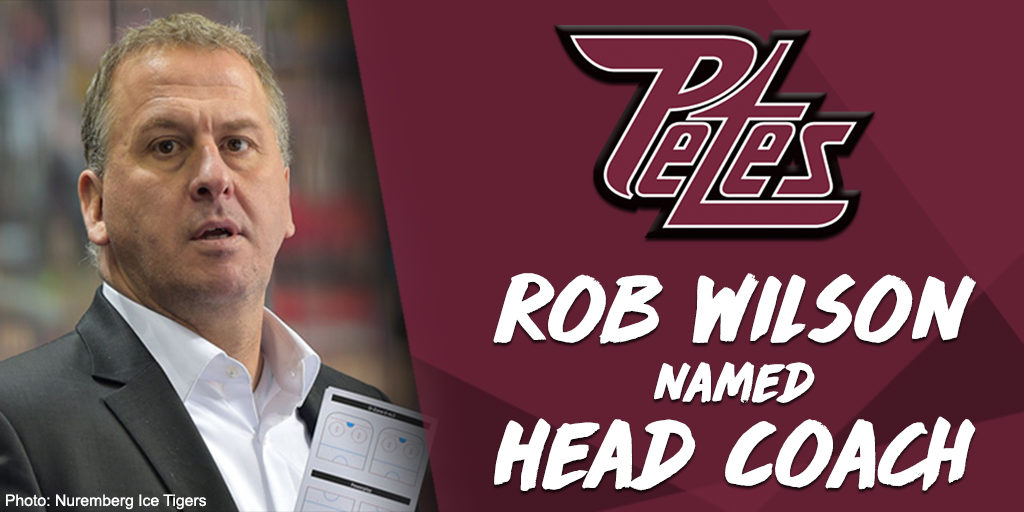 Wilson served as Head Coach of the Deutsche Eishockey Liga’s (DEL) Nuremberg Ice Tigers for the past three seasons, compiling a record of 97-43-0-8 in the German premiere league over that span.

The former defenceman and Toronto, Ontario native was named DEL Coach of the Year in 2016-17, and has guided his team – also known as the Thomas Sabo Ice Tigers – to league semi-final appearances in each season he was with the club. A Canadian-British dual citizen, Wilson was also named Elite Ice Hockey League (EIHL) Coach of the Year in 2005-06, guiding the Newcastle Vipers to a league championship.

“After conducting a thorough review and selection process through which a number of highly qualified candidates were considered, I’m very excited to announce Rob as our new Head Coach,” commented General Manager Mike Oke. “Rob brings a strong knowledge of the game, utilizing current systems and strategies to prepare his players for various game situations. He has a passion for developing players to achieve their best, and has a proven ability to win.”

“His work ethic and attitude will create an environment that will not only allow players to develop and succeed, but also enjoy the process,” continued Oke.

Wilson played for the Petes during the 1988-89 season after being acquired from the Sudbury Wolves. He helped the team win the J. Ross Robertson Cup as OHL champions that season before embarking on a pro playing career that included stops in various North American and European leagues.

“During the interview process, my conversations with Mike were very good, and I felt that the opportunity to join the Petes would allow me to have a strong, positive impact on the organization, and particularly on the players,” commented Wilson during a phone call from Europe. “As a coach I’m hard, but fair. Players will feel intensity through my leadership.”

A tenured NHL veteran and Stanley Cup and World Champion who has played under Wilson commented during the interview process that, “Rob has been one of the best coaches I have ever had. Through his commitment, passion, and knowledge, I believe that Rob is qualified to coach and succeed at the highest levels of hockey.”

Wilson’s coaching career began in 2003-04, and included stints in the EIHL and with the Great Britain National Team, Neumarkt/Egna and Ritten/Renon in Italy, and one season with the DEL’s Straubing Tigers in 2014-15 before joining Nuremberg. He guided his team past Theo Fleury and the Belfast Giants en route to the 2005-06 EIHL championship with Newcastle in the team’s first season in the league, and later won the Italian Playoff Championship in 2013.

His junior hockey career began when he was selected by the Wolves in the fifth round (62nd overall) of the 1985 OHL Priority Selection. In 224 OHL games he compiled 9 goals, 61 assists, 70 points, and 467 penalty minutes. The Pittsburgh Penguins selected him in the 12th round (235th overall) in the 1986 NHL Draft.

“When Rob arrives in Peterborough next week, we will begin the process of shaping his coaching staff,” added Oke.

Wilson has maintained strong connections with the Peterborough area through his career. His daughters Jessica and Lynsay live and attend school in Peterborough, and he owns a cottage on Chemong Lake. His fiancée, Heidi, and her son, Max, will relocate to the area this summer.