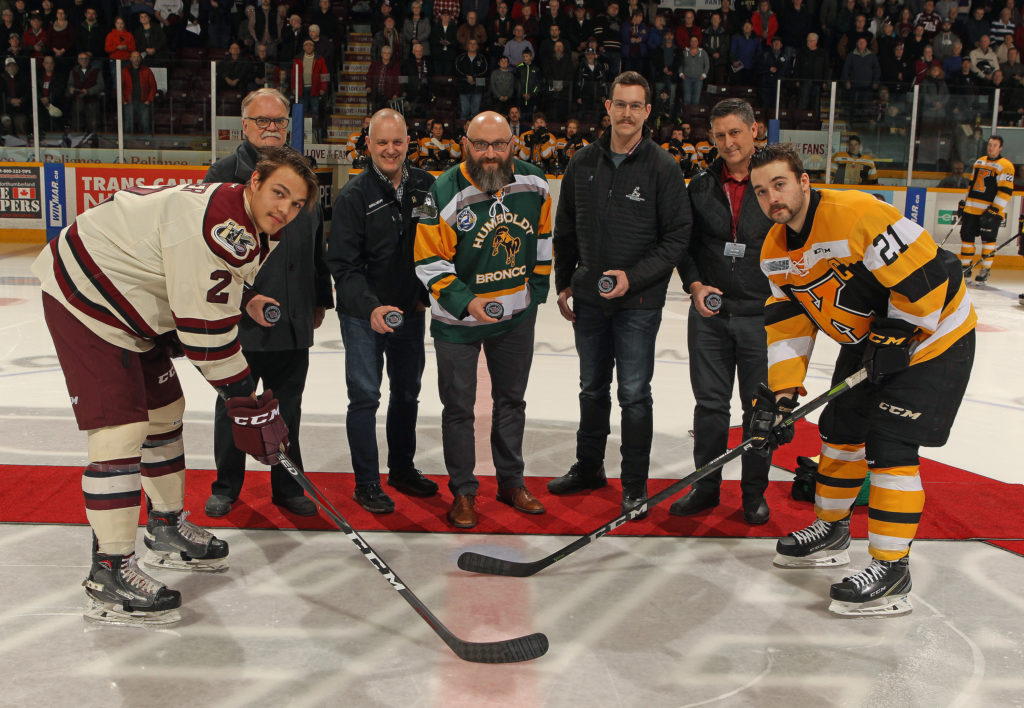 Nick Robertson had a had trick and two assists, and 11 other Petes had points, in a dominant 8-2 win over the rival Kingston Frontenacs in front of 3,246 fans at the Peterborough Memorial Centre on Thursday night.

The game would mark Robertson’s second return from injury this season, and his first against the Frontenacs without his brother, Jason, in the lineup after he was traded to the Niagara IceDogs earlier this week. The Petes stepped onto the ice determined to alter the previous week’s record.

Just over half an hour until the puck drops on Faith Night!

The visitors started the top quarter of the period with the upper hand, outshooting the Petes by five shots. However, the maroon and white were quickly awarded two minutes of play with an extra body when Jakob Brahaney was penalized for cross checking at 14:02. Unfortunately the power play proved ineffective for the Petes and left the score 0-0.

At 12:43 the visitors took control of the scoreboard when Derungs beat Hunter Jones through his five hole. The Petes continued to cycle the puck deep in Kingston’s zone but Bonello’s calmness between the pipes prevented the Lift Lock lads from hitting the mesh.

A shot by Adrien Beraldo from the point ignited some excitement in the crowd but it wasn’t enough to put the hometown boys on the scoreboard. Not long after, d-man Cole Fraser sat in the sin bin for two minutes following a trip. The Fronts continued to dominate puck possession however the score remained 1-0 in favour of Kingston.

The trio of Chris Paquette, Brady Hinz and Adam Timleck created some serious buzz in prime scoring territory during the final minute of play in the first, but it was a second shot off the pads of Bonello by Robertson that tied up the game for the Petes.

ROBBIE! In his (second) first game back from injury, @nickrob2001 dangles in tight quarters to slide the pack past Bonello! @AdamTimleck + @chis_decs with the helpers. 1-1 game!#GoPetesGo pic.twitter.com/19UJwq33TI

The shot clock reflected the game’s score after 20 minutes of play.

Tied for goals, tied for shots through 20 minutes in #ptbo!#GoPetesGo pic.twitter.com/qEh28kyfcP

The second period proved hot for the Petes. The Frontenacs started out down a man as Cameron Hough sat in the penalty box for 2 minutes for tripping. Although the Petes were unable to capitalize on their power play, Timleck scooped up a rebound following a shot by Semyon Der-Arguchintsev during even strength play, giving the Petes their initial lead of the night.

The puck continued to bounce in favour of the hometown guys as they tallied four goals in the following minutes, ending the period 6-1. England native, Liam Kirk followed up two minutes after Timleck’s goal with one of his own putting the Petes two goals ahead of the black and yellow.

MACKER! @mattmcnamara23 parked at the front of the net to tap home a crafty SDA pass, making it 4-1 for the maroon and white! Assist for @nickrob2001, too.#GoPetesGo pic.twitter.com/x1HQ23FdKK

ROBBIE! AGAIN! @nickrob2001 forces a turnover at the blue line then rips the puck past Dugas! It’s 5-1 for the Petes!#GoPetesGo pic.twitter.com/3xnvcKvEaf

OZ! Another Petes d-man at the net to put the puck home as @aosmanski36 redirects @Denault17‘s shot past Dugas! @nick_isaacson adds a helper as well. 6-1 Petes!#GoPetesGo pic.twitter.com/Y09g0SmVbC

Kingston ended the period stronger than they started, creating traffic in front of Jones that suggested a possible goal in their near future , however strong rebound control by the Petes goaltender denied all possibilities.

Thankful for our 🇺🇸 players this #Thanksgiving who have combined for 7 points this game 😄#GoPetesGo pic.twitter.com/fUpSbagP84

The third period saw the puck flow between both ends however it was clear Peterborough brought more energy to the ice. Kirk was the second Pete to garner two goals in the game, when he put a pass from rookie Cameron Butler past Ryan Dugas.

BRILLIANT, KIRKY 🇬🇧! @kirky_1424 redirects the puck off a Fronts defender to notch his second of the night! @CButler_21 + @chis_decs record the assists. 7-1 for the Petes!#GoPetesGo pic.twitter.com/C5pUTF1j8W

The Frontenacs had a little taste of hope when Kallaway Mercer hit the back of the Petes net at 6:64, however the glimpse of positivity was quickly quashed by Robertson who marked his comeback with a hat trick, clinching his third goal of the night five minutes after.

This evening’s 8-2 win would send the Petes in a positive direction as they hit the road to Hamilton and Erie over the weekend.

Robertson, Kirk, and Der-Arguchintsev were named the game’s first, second, and third star, respectively. Timleck was named the Mark’s Hardest Working Pete of the game. Jones stopped 30 of 32 Kingston shots.

The Petes return home to clash with the North Bay Battalion at the PMC on Thursday, November 29 at 7:05pm. Tickets are available through the Collins Barrow Box Office in person, over the phone at (705) 743-3561, and online.