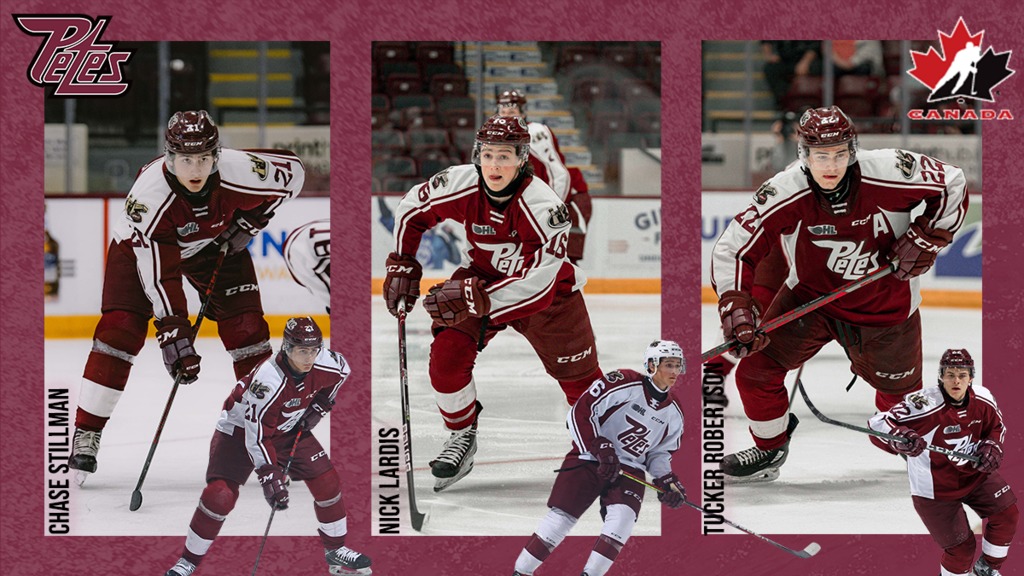 Robertson and Stillman are among 44 players – four goaltenders, 14 defenceman and 26 forwards – will also be on the ice in Calgary for Canada’s National Junior Team summer camp, set for July 23-27. The camp roster features 26 players that have been selected in the NHL Draft, including Stillman (NJD). Robertson is eligible to be selected in the 2022 NHL Entry Draft in Montreal this summer.

Lardis is among 44 players – four goaltenders, 14 defencemen and 26 forwards – that will compete for an opportunity to wear the Maple Leaf at the 2022 Hlinka Gretzky Cup in Red Deer, AB. The selection camp, which takes place July 20-23, will include a variety of on- and off-ice sessions. Following the selection of the final roster on July 24, Team Canada will play a pair of games against Red and White teams from Canada’s National Junior Team summer camp.

All three players set career highs in points with the Petes during the 2021-22 OHL season, and are expected to play a key role as the team begins the journey toward Peterborough’s tenth OHL Championship this fall.

Petes Season Tickets are now on sale for the 2022-23 Petes season, starting at just $299+HST, Petes Season Ticket Members get access to all benefits and perks, for the lowest price. Season tickets available only while supplies last. To reserve your seats, call (705) 743-3681 ext. 6000 or email tickets@gopetesgo.com.

The Peterborough Petes are the oldest continuously operating team in the Ontario Hockey League, having won nine OHL championships and one Memorial Cup championship over 65 years. The Petes have graduated over 180 players to the National Hockey League. For more information, visit www.gopetesgo.com and follow the Petes on Facebook (facebook.com/petesOHLhockey), Twitter (twitter.com/PetesOHLhockey), TikTok (tiktok.com/@petesohlhockey) and Instagram (instagram.com/petesohlhockey).