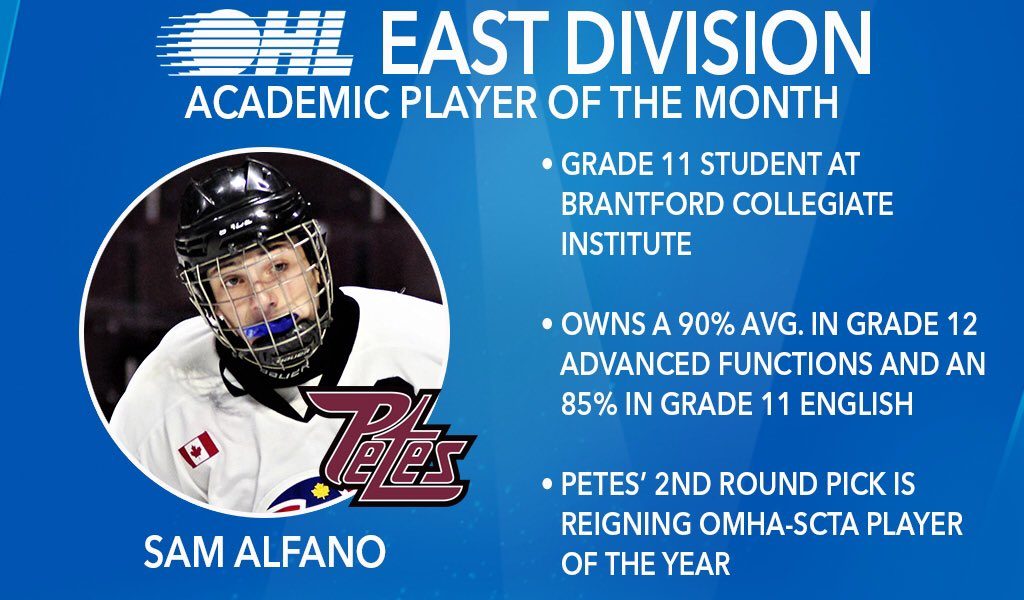 Today, the Ontario Hockey League announced that rookies Sam Alfano of the Peterborough Petes, Owen Beck of the Mississauga Steelheads, Gavin Bryant of the Owen Sound Attack and Nicholas De Angelis of the Windsor Spitfires have been named OHL Academic Players of the Month for March.

East Division: The Peterborough Petes’ Sam Alfano has been named the East Division Academic Player of the Month for March. He holds a 90% in Grade 12 Advanced Functions and an 85% in Grade 11 English at Brantford Collegiate Institute. “Sam has worked hard all year to maintain a high academic standard while planning personal workouts and ice time with the uncertainty of when the season will begin,” wrote Petes academic advisor, Shannon Fife.

The 17-year-old Cayuga, Ont. native was a second round pick of the Petes in the 2020 OHL Priority Selection out of the Southern Tier Admirals, where he notched 63 points in 32 games and was recognized as the OMHA- SCTA Player of the Year.

“Owen is described by his teachers as being a lovely student. He is high achieving, asks questions to clarify his understanding, is very diligent and hardworking,” wrote Genevieve Wong, guidance councellor at Philip Pocock Catholic Secondary School. “In addition to his academic strengths, he is polite, respectful, and conscientious.  Overall, Owen is a pleasure to have in class and as part of the Pocock community.”

The 17-year-old product of Port Hope, Ont. was drafted 29th overall by the Steelheads in the 2020 OHL Priority Selection following a 39-point season with OMHA gold medalist Quinte Red Devils.

Midwest Division: Gavin Bryant of the Owen Sound Attack has been named the Midwest Division’s Academic Player of the Month for March. The centreman is on track to complete 12 credits this year at Owen Sound District Secondary School and Blyth Academy. He scored an 80% in Grade 12 University English this past summer, earned an 82% in Grade 12 University Sociology and 94% in Grade 11 University Math during Quadmester 1. Bryant also maintained a 95% in his Ontario Literacy Course as well as a 94% over three periods of Co-op. He is awaiting final scores for Grade 11 Biology and three more periods of Co-op.

“While some students have found online learning difficult and have had trouble motivating themselves, Gavin Bryant has seen this as an opportunity to focus on schooling while his hockey schedule is lighter,” wrote Attack academic advisor Sarah Rowe. “His maturity is off the charts. As a 16-year-old he is already taking the lead to assist other students in their studies. His teachers are also impressed with his maturity, commenting that his insights and attention to detail are well beyond those of his peers. We can’t wait to see this young man in an Owen Sound Attack uniform.”

The Ingersoll, Ont. native was a second round pick of the Attack at the 2020 OHL Priority Selection. He impressed with 40 points in 31 games with the Brantford 99ers during the 2019-20 season.

The 16-year-old King City, Ont. native was chosen 36th overall at the 2020 OHL Priority Selection following an impressive 16-point season from the blue line with the Mississauga Senators.

A total of 334 graduates utilized their OHL Scholarship at post-secondary institutions across North America during the 2019-20 academic year, with a total contribution by teams of over $3 million.  Over the past 10 seasons, OHL Scholarship payments have totalled more than $25 million.