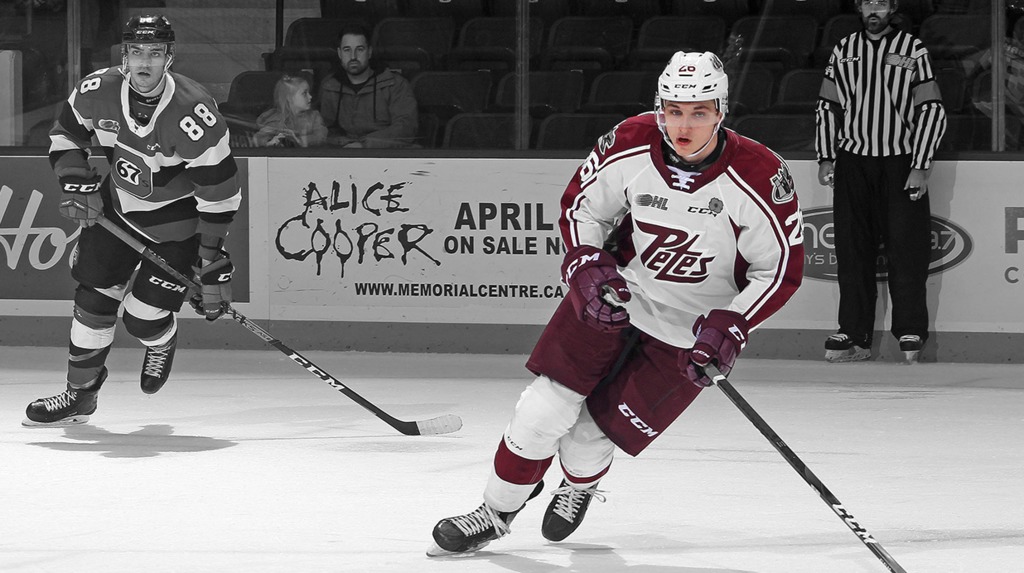 Part five of the series features fourth-year forward John Parker-Jones. Last season Parker-Jones set a career-high tallying eight goals and seven assists and proved to his teammates, coaches and himself the value that he brings to the team, aside from his size. Parker-Jones recently sat down and provided insight into how his performance last season has pushed him to train harder in preparation for his hopeful return to the Memorial Centre.

Blaind: Going into your fourth year, what are you looking forward to?

Parker-Jones: We are obviously a younger team heading into the season so my hopes are to leave nothing on the table and put my best foot forward. I want to make sure that I can prove to everyone that I have become a better player than when I first joined.

Blaind: What has your experience been like playing for the Petes?

Parker-Jones: Playing for the Petes the last four years will go down as some of the best years of my life. I have enjoyed every minute of my time in Peterborough. The atmosphere is great and my teammates are awesome. The coaching staff has helped me grow as a person and as a hockey player. I wish the time could be forever.

Blaind: When you first came to the team, who did you lean on for support to ease your transition?

Parker-Jones: One of the first people that I leaned on to help with the transition was Hunter Jones because he is also from Brantford. We got to know each other pretty quickly. I also became pretty close friends with Matt McNamara. There was an endless amount of support from all of the guys but those two really helped my transition onto the team and I’m very fortunate for what they were able to do for me.

Blaind: What have you learned from the older guys on the team that you will use as new guys come onto the team and look for leadership?

Parker-Jones: Zach Gallant has really taught me a lot from being the captain and leader of the team for the past two years. There are a lot of good habits that I was able to pick up from him. With him, Hunter and Matt, I was able to have good team-building experiences and show how I am able to bring the best out of everyone.

Blaind: It really showed when last year you put up career-high stats, how did you feel when the season got cancelled?

Parker-Jones: I was very disappointed. I was doing well before the season got cancelled and I was looking forward to adding to those numbers while also having a great playoff run with the team. To know that I was doing the best I could before it all ended helps me sleep at night because I’m satisfied but I know that there is still work to be done and a lot more to prove.

Blaind: Your height is definitely noticeable on the ice, how do you think that plays a role in your game?

Parker-Jones: When I step on the ice I am one of the first guys you notice just based on the size but with the size comes responsibility. You don’t want to be one of those guys who can talk the talk but not walk the walk basically. I think I did pretty well sticking up for teammates and trying to make sure I’m leading the hits chart every night. I also think that it is a huge advantage to myself offensively and defensively because I have a good reach and have a big frame in front of the net. There are endless possibilities that come with it and I’m very fortunate for it.

Blaind: Who are some players that you have played with or that you look up to that have influenced your game?

Parker-Jones: One of those teammates would definitely be Nick Robertson. We both joined the team in the same year. We put in a lot of work together, we have a similar work ethic and you can see where it has taken him. One of the biggest habits I would like to take from him is how he plays the game and how attentive he is for a smaller guy. He’s not afraid of anything.

Blaind: I’ve heard you fans really connect with you, that you’re generous with your time after games to talk with them. Why do you think that community connection is important? 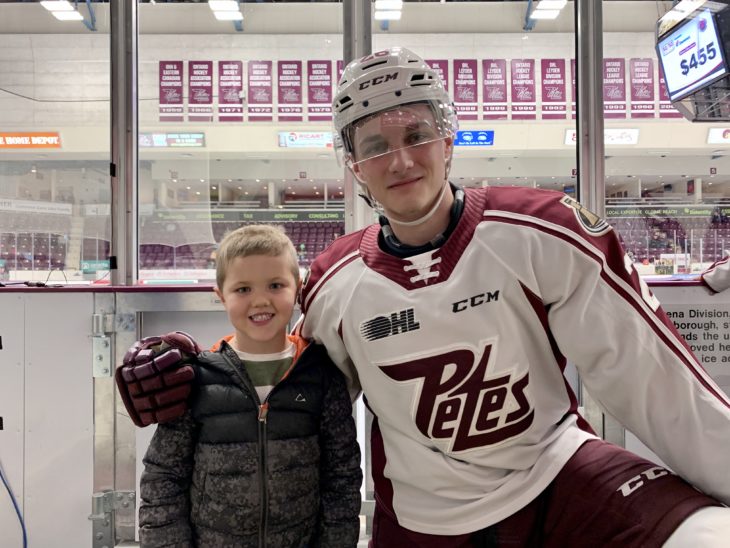 Parker-Jones: I know that this isn’t going to be available for me forever. I am going to get old and people are going to forget about me playing hockey so I just try to enjoy my time. An example would be doing school visits. I think that they are my favourite and I always want to do them because how often do you get the opportunity to stand in front of a gym in front of our youth to try and inspire them. I remember sitting in a gym class and having professional athletes or businessmen doing presentations so being able to do that myself is really self rewarding. It feels good making other people feel good and being with the Petes is a great way to express that.

Blaind: How have you been staying motivated during quarantine?

Parker-Jones: I’ve just tried to keep my head in the game. I’ve been preaching to take advantage of this time to get better because there aren’t going to be people who are using their time well. So there’s a chance now to get ahead of some guys and take advantage of the time we’ve been given. It sucks that we’ve been off the ice for almost a year now but that a whole year where you can put in work for yourself both mentally and physically. If you can make the most out of your time, it is going to benefit you.

Blaind: How are you keeping your mind and body ready for the season?

Parker-Jones: I’ve only been focusing on my workouts. I haven’t stopped working out since the season ended. I get the odd vacation in the summer but I’d be working out even if I wasn’t playing hockey. It allows you to stay healthy mentally and physically. It’s a good way to get rid of stress. Being off the ice I like to play ball hockey which is another way I feel close to the ice rather than actually being there. Other than that I have great people around me who help keep me sane after doing something for long and then not doing it is hard.

Blaind: What are you looking forward to when the season starts?

Parker-Jones: I’m looking forward to getting back on the ice and proving myself. I still think that I have a lot to prove to some people. Once this season gets going again it is time to put the pedal to the metal and show everyone what I’ve got left.

Blaind: Do you have any advice for the new players for their time with the Petes organization?

Parker-Jones: It’s cliche but enjoy your time. I remember being younger and the guys saying to not waste this time and soak it up like a sponge because it goes by fast. Being in this stage now I get to tell that to younger guys. Another thing would be to control the things you can control. Some nights you aren’t going to get the ice time you want or you might get injured which are out of your control. If you can control the things that you can control everything else will fall into place.

Blaind: What goals do you have set for yourself during your time with the Petes and your time in the OHL?

Parker-Jones: My goal for my final year would be to attain some professional hockey attention. I want to have a big year for myself and I want to show everyone that I have some game left in me. Season wise, I want to add to my numbers again and try to take another step forward.

Throughout his four years, Parker-Jones has continued to show his dedication on and off the ice and captured the hearts of fans. Heis looking forward to returning to Peterborough to continue his work on the ice and in the community.

Want to hear more about Parker-Jones teammate Matt McNamara? Click here to learn more about McNamara and playing for his hometown Petes.