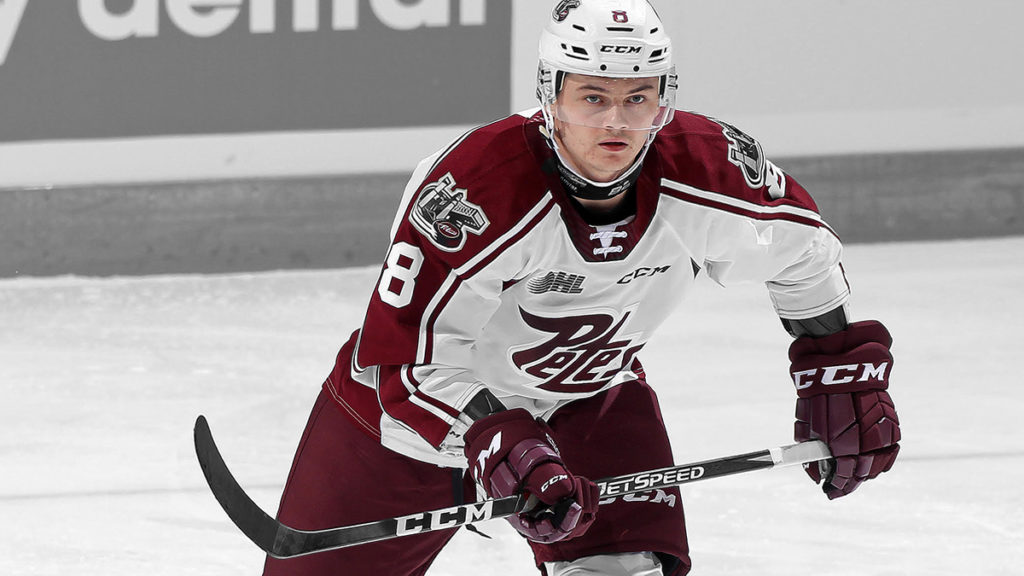 Part three of this series features fourth-year Peterborough native, Matt McNamara. McNamara has held the blue line for the Petes across 168 games and previously spent two seasons with the Lindsay Muskies from 2015-17. Throughout this interview, the defenceman sheds light on the reality of a cancelled season and shares his advice for his younger teammates.

Blaind: What has your experience been like playing for your hometown team?

McNamara: It’s been amazing! Not a lot of people get the opportunity to grow up in a town and play for their home team in the OHL. I was lucky enough to play four years now and it’s been quite an experience. Having my family, friends and everyone in Peterborough around me supporting me at games. It’s awesome!

Blaind: Your great uncle, Bob Gainey, also played for the Petes. What kind of insight did he give you into the team and league?

McNamara: We talked a few times especially when he got hired onto the board. I’ve seen him a couple of times around the rink so we’ve shared a couple of words together but other than that he just said that when he played here he enjoyed it.

Blaind: When growing up in Peterborough, what Petes players did you look up to?

McNamara: I think as a kid growing up in Peterborough, the Petes were everything to me. Being able to go to the games and having the players right there in front of you is amazing. Growing up being a big hockey fan knowing the Petes and the organization, it was a goal of mine to reach the OHL and play. I never even thought in my head that one day I would be able to play for the Petes. There were never any players that I truly looked up to but I met Jordan Staal after a game on the ice so that was a pretty special moment. All other players were a spotlight for me as a kid to look up to and hopefully, now there are kids that look up to me and my team.

Blaind: You’re about to enter your fourth year with the team, what have you learned and how have you grown with the organization?

McNamara: I think I’ve grown a lot on the ice and off the ice. Coming onto the team as a 16-year-old you don’t really know what to expect but I’ve been a part of a lot of great teams and great groups of guys so I think that really helped me on the ice. The coaches have helped me off the ice by doing community events and going around Peterborough to meet fans. It has really made me grow as a person and it has helped me move forward with my life.

Blaind: What have you learned from the older guys on the team, when you first transitioned from the Muskies in 2017?

McNamara: The older guys were huge. The little details they put into practice and the training that they do every day was something coming in that you don’t necessarily do or think about. Once you get to the elite level of the OHL, you really have to put your time in and perfect your craft as much as possible because it is your job and a lot of people are looking at you to perform every day and night on the ice. The older guys said it goes by super fast. I can tell you now that they weren’t lying. It feels like yesterday when I was starting and now I’m going into my final year so it’s pretty crazy. So they just said, ‘enjoy the moment, learn from your mistakes and just develop as much as possible on and off the ice.’ I think I’ve done that and they have helped a lot along the way.

Blaind: What are some key things you are going to do as a leader to welcome a new, younger set of guys onto the team this season?

McNamara: As a younger kid, you truly don’t know what to expect but things change and things happen where you’ll get put into different roles and you’ll have to do things you’ve never really done before, so I think the biggest thing is to come in with an open mind and just grasp anything that gets thrown your way. As a 16 or 17-year-old, you have a position that a lot of kids don’t so you have to do everything in your power to succeed. It’s an opportunity of a lifetime, I think that if you can grasp that and enjoy the ride as much as possible, you’ll enjoy your time in the OHL.

Blaind: How have you been dealing with quarantine?

McNamara: It’s been tough and I think it’s been tough on everyone. I’ve been at home since March when the season got cancelled, so it’s coming up to a year that I haven’t played a game of hockey. Watching the NHL, it’s definitely not the same and I miss it a lot. I miss having all of my best buddies around me 24/7. Now that I’m at home and being away from them, I really miss it. I think it’s been hard mostly just mentally because as a hockey player you’re powered by a schedule either by games or practices, you wake up and know exactly what you’re doing. Hopefully, we get the OK to start playing again.

Blaind: How did you deal with the cancellation of the end of last season after such a strong run?

McNamara: That was the toughest part. During my time in Peterborough, we have had some good teams but nothing like what we had last year. We all believed we could go all the way and we really ended up picking up our game to where we could feel like that.

Blaind: Do you have a goal set for yourself while you are with the Petes and in the OHL?

McNamara: Yes, but not starting my last year has thrown a wrench in those plans. Anyone who ends up in the OHL has the main goal to play professional hockey someday either in the NHL or somewhere else. I have that same goal but you go through your OHL career and something doesn’t happen the way you plan. I think there are so many opportunities after the OHL which are just as good. That could be university hockey or going to university and getting a job. That is definitely in play considering this last year has not been the year that everyone wanted so it has changed my plans even if we get back on the ice or not. After my time is done I will have a solid base and move on but still remember everyone that went through the time with the Petes organization and if I even need to talk they would be there for me.

McNamara is a defenceman who continuously displays dedication to the team and city of Peterborough. The hometown lad is ready and excited for when the season starts and is prepped to spark some energy in the Peterborough community, one Petes game at a time.

Want to hear more about McNamara’s teammate Curtis Trolley? Click here to learn about Trolley and his experience playing with hometown Petes.