Saturday Shutout for Petes over Otters 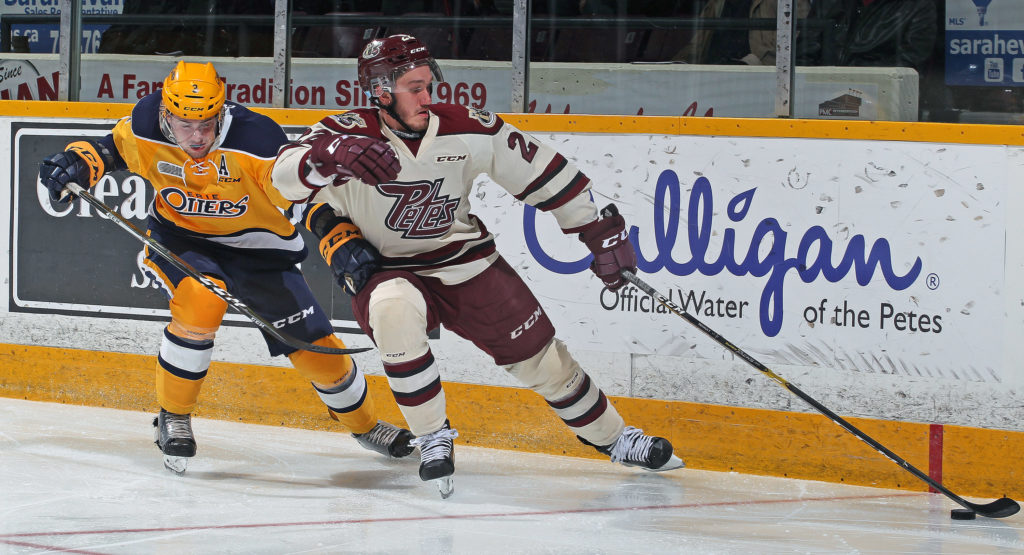 Liam Kirk buried two markers and Declan Chisholm had a goal and two assists on route to a 4-0 Petes win over the Otters on Saturday night, marking the team’s first victory in Erie since the 2011-12 season and Hunter Jones’ second OHL shutout.

It didn’t take long for the game to shift into high gear when Cole Fraser issued a trademark check to an Otter. Unhappy with the play, Brendan Kischnick initiated fisticuffs with Fraser, sending them both to the box but the Petes to the power play.

Just ten seconds into the ensuing man advantage, Winnipeg Jets prospect and Petes leading scorer Declan Chisholm got his club on the board after a good cycle down low by Semyon Der-Arguchintsev and Adam Timleck.

CHIZ! After keeping the puck in the zone a few seconds earlier, @chis_decs releases a blue line bomb on the power play! Assists to SDA and @AdamTimleck. 1-0 Petes!#GoPetesGo pic.twitter.com/jnFgzoj2Nl

Back to back infractions were handed to the men in maroon. Liam Kirk was fed the puck as he came out of the sin bin but was turned away by netminder Noah Battaglia.

A fairly balanced first period came to a close with the Otters holding a small lead on the shot clock.

A solid opening frame for your Petes in Erie.#GoPetesGo pic.twitter.com/rQFzCbFMRa

An unsuccessful Petes power play was followed up by more penalty woes as Austin Osmanski and Adrien Beraldo were both charged with minor calls. Peterborough’s fourth-ranked penalty killers continued to shut down Erie’s extra man efforts.

Nick Robertson, who was the first star in Thursday’s 8-2 win after registering 3 goals and 2 assists, went to work late in the frame to give his team a 2-0 lead.

ROBBIE! The kid stays hot and uses his backhand to bring Peterborough’s lead to 2-0!#GoPetesGo pic.twitter.com/WqaiFAvxG0

As the clock ticked away on the second period Kirk scored for the second consecutive game, this time with assistance from Chisholm and Erik Čermák.

GO ON, KIRKY 🇬🇧! @kirky_1424 spins ’round like the London Eye🎡 to make it 3-0 Petes! @chis_decs with a helper.#GoPetesGo pic.twitter.com/mNGedFWTZL

The teams headed to their rooms with Erie maintaining an advantage on the shot clock, but the Petes holding a strong 3-0 lead on the scoreboard.

Jonesy and the penalty killers keeping the Otters at bay 💪#GoPetesGo pic.twitter.com/9U8Xd2ODYH

A far more disciplined third stanza solidified Peterborough’s victory. With help from Cameron Butler and Chisholm, Kirk would put away his second of the evening and his team’s fourth of the game.

Liam records back to back multi-goal games for the first time in his @OHLHockey career 👏#GoPetesGo pic.twitter.com/s4mLpiv3Wp

Kirk’s goal would send the bears flying onto the Erie Insurance Arena ice, sending the game to a break while the furry friends were tidied up.

Jones stood tall to 11 shots in the third period, 38 in total, to maintain a shutout – his second of the season and of his career.

The Petes wrap up the weekend with a Sunday matinee match up in Hamilton against the Bulldogs at 2:00pm. They’ll return home to clash with the North Bay Battalion at the PMC on Thursday, November 29 at 7:05pm. Tickets are available through the Collins Barrow Box Office in person, over the phone at (705) 743-3561, and online.