Simpson Named OHL Goaltender of the Month for October 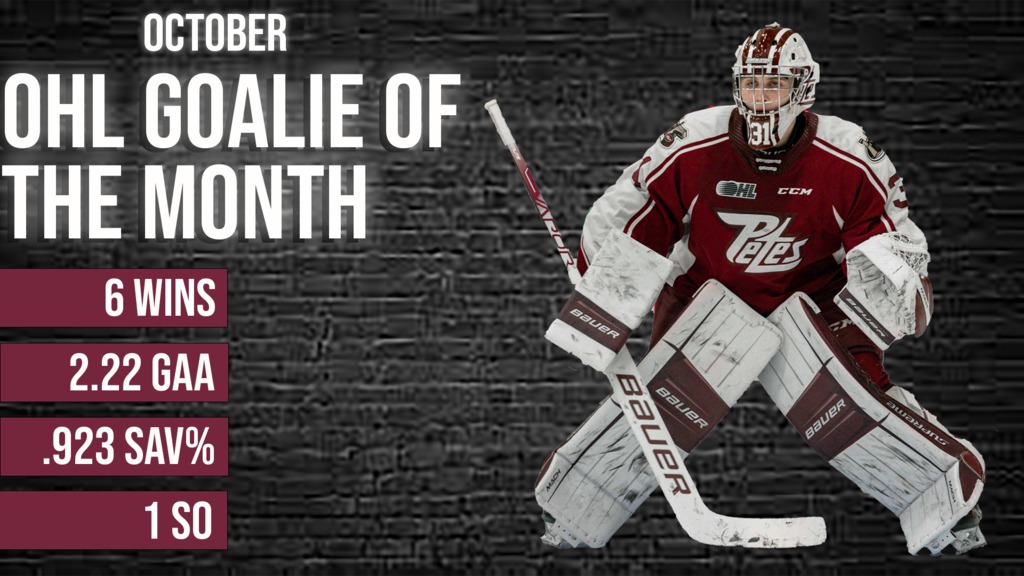 In the month of October, Simpson posted a record of six wins and two losses with one shutout, a goals against average of 2.22, and a .923 save percentage. In ten games this season, Simpson currently sits first in the OHL in goals against average (2.38), wins (7), and second in save percentage (.919). Simpson stands at 6’1”, 198 lbs, he was selected by the Petes in the tenth round, 193rd overall from the London Jr. Knights in the 2020 OHL Priority Selection.

“Michael has done the work.” noted Petes Associate Coach, Andrew Verner. “He committed to coming to Peterborough as a 3rd goalie to play U18 and has gotten better everyday since. October was a busy month with lots of travel so we needed Simmer to be good. We want to have a very good year and Michael will be a big part of it.”

“It feels amazing.” exclaimed Simpson. “To be recognized two months in a row is pretty special. It’s a nice achievement for myself, but overall it’s a team award as we’ve played really good hockey this month. I’m excited to build off this and keep it going as we have a really busy schedule this month.”

Simpson will be honoured before the game at the Petes next home game on Thursday, November 3rd at 7:05PM when the Barrie Colts come to town for First Responders Night at the PMC. Tickets can be purchased by visiting the Grant Thornton Box Office in-person or online or by clicking here.