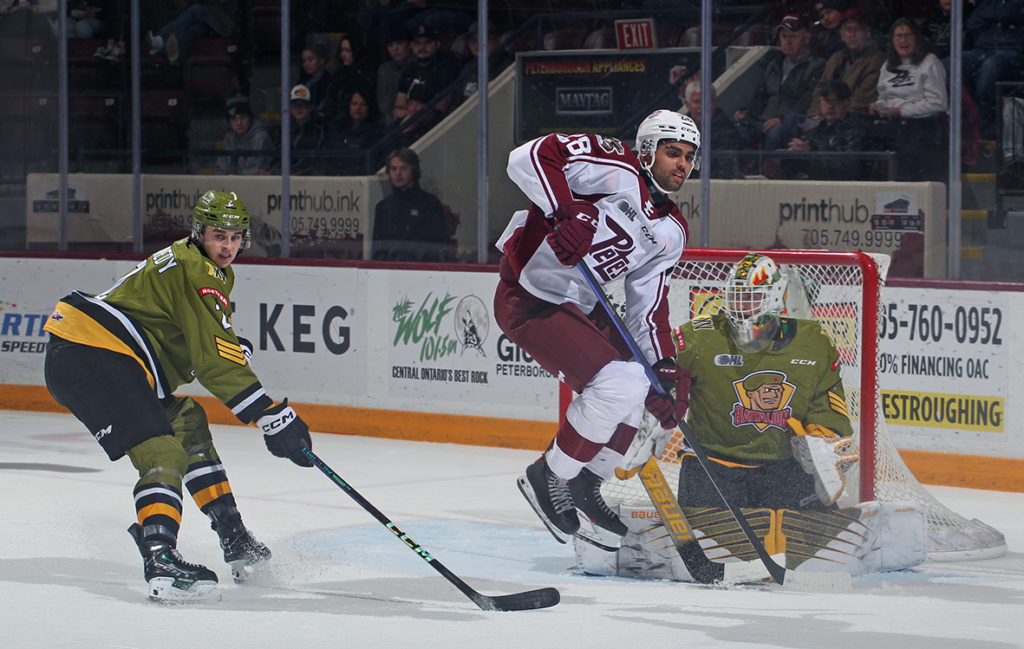 Looking to get back in the win column, the Petes welcomed the North Bay Battalion to the PMC for a Saturday night battle between the second and third place teams in the Eastern Conference. North Bay entered the PMC on a two game win streak, having won the night before in Kingston. Petes forward J.R. Avon would be looking to extend his 10 game point streak, in which he has put up 13 points. Michael Simpson would be looking to bounce back in the Petes net, after surrendering a season high-tying six goals on Thursday night. North Bay would counter with Winnipeg Jets prospect Dom DiVincentiis, who has had the Petes number this season, giving up only two goals in two games.

The Petes came out strong to start the period, trying to take advantage of any Battalion weaknesses, who had played the night before. Despite multiple Petes chances, it would be North Bay who struck first on a shot from the point. Wyatt Kennedy was the source of that shot and was credited for his second goal of the season to put the Battalion up 1-0. Later on in the period, Konnor Smith looked to have tied the game up at 1-1. After the goal was reviewed, it was determined that Jax Dubois had knocked Battalion goalie Dom DiVincentiis’ stick, leading to the goal being called back for goalie interference. The Petes would continue to press, but DiVincentiis would shut the door and take North Bay’s 1-0 lead into the break.

Goaltending would take over in the second period, with both goalies stealing the show with a couple of highlight reel saves. The Petes controlled the majority of the period, tacking on 15 shots on goal, but would be unable to break through and get on the scoreboard. North Bay would escape to the second intermission with their 1-0 lead intact despite Peterborough leading 29-20 in shots.

The final twenty would see North Bay start to find their stride. Just two minutes in, Kyle Jackson would score on the powerplay to extend the Battalion’s lead to 2-0. North Bay continued to put pressure on after the goal and nine minutes later it would pay off as Dayln Wakely scored to make it 3-0. Michael Simpson would be the star for the remainder of the game, making 20 saves in the period to keep the Petes in reach. Despite Simpson’s stellar play, Peterborough would be unable to solve DiVincentiis and North Bay would take the game 3-0.

The Petes next game is Sunday, December 4th when they travel to Ottawa for a matinee with the league leading 67’s. The Petes currently hold a 2-1 advantage in the season series between the two teams. Puck drop is scheduled for 2:00 PM. You can catch the game on YourTV Peterborough and Freq 90.5.