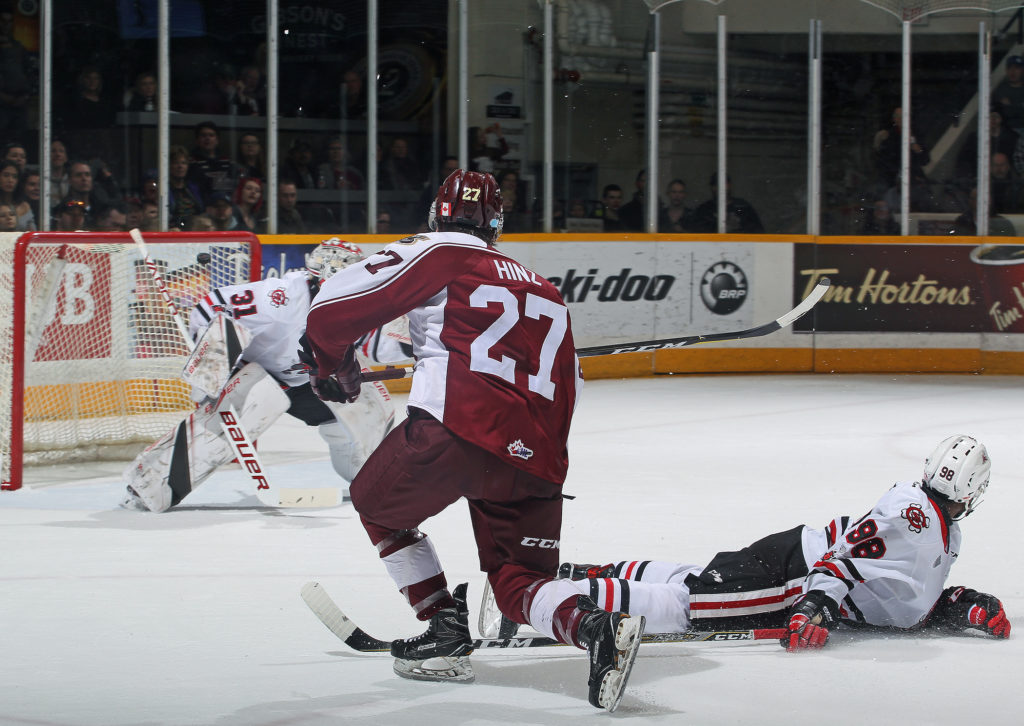 The stands inside the Peterborough Memorial Centre were packed for the 2019 Family Day Game. The Peterborough Petes were hoping to get back in the win column against the Niagara IceDogs, but ultimately would fall by a score of 5-2.

Before the game the Petes welcomed some special guests including Jake Mather from Five Counties. He was the Petes 7th skater and was on hand to drop the puck for the ceremonial face off.

Once the game started, unfortunately for the Petes, it was the IceDogs who found the scoresheet first. Daniel Bukac found the back of the net off a quick draw to give the visiting team an early 1-0 lead. His third goal of the season was assisted by Drew Hunter and Oliver Castleman.

Just under one minute later, the IceDogs added to their lead with a goal from Daniel Bukac.

The fast paced first period continued with the Petes finding the scoreboard themselves. Cameron Butler continued his recent hot streak with a goal of his own. His fourth goal in four games and 16th on the season was assisted by Michael Little and Ryan Merkley. This closed the deficit to just one goal.

With just over five minutes remaining in the period the IceDogs found the back of the net once again, Matthew Brassard gave a pass to Phillip Tomasino who then came down the right wing and put a shot on net. The shot fooled Petes goaltender Hunter Jones and gave the IceDogs a 3-1 lead.

The IceDogs’ luck continued in the final minute of the first. Niagara forward Jason Roberson came down the left wing after a Petes giveaway, breaking away and beating Jones five-hole to make the score 4-1.

This would be the score after 20 minutes of play. The IceDogs would also lead 14-6 in shots.

The wrong Robertson scores in the final minute of the frame, leaving us at a 4-1 Niagara lead through 20 minutes.#GoPetesGo pic.twitter.com/KnPnNFgy8r

To start the second period, the Petes made a goaltender change, as Tye Austin would lead the boys in maroon and white out for the final 40 minutes.

Approaching the five minute mark of the period, Tomasino chipped the puck past two Petes defenders and beat Austin glove side to score his second goal of the hockey game. The IceDogs now led by a score of 5-1.

This would be the score after 40 minutes of play. The Petes had caught up in shots during the second frame, but the ce Dogs led 25-23 in that department.

The third period was tight checking, but in the final five minutes Petes forward Brady Hinz was able to find the back of the net. The assist on the goal would go to Liam Kirk as the Petes were now down three goals in the dying minutes.

HINZ!!! @BradyHinz puts a beauty goal past the Niagara goaltender and the Petes trail 5-2 with just over five minutes remaining in the third period!#GoPetesGo pic.twitter.com/FQF0XWDWjV

This would be as close at the Petes would get to victory, they would fall by a score of 5-2.

The IceDogs finished the game leading in shots as well, directing 36 shots on net compared to the Petes 32 shots.

The first star of the game was Tomasino, the second was Niagara net minder Stephen Dhillion, and the third was Cameron Butler. The Mark’s Hardest Working Player of the Game was awarded Petes goaltender Austin.

The Petes are back in action on home ice on Thursday, February 21 when they host the London Knights. Tickets are available through the Baker Tilly Box Office in person, over the phone at (705) 743-3561, and online.