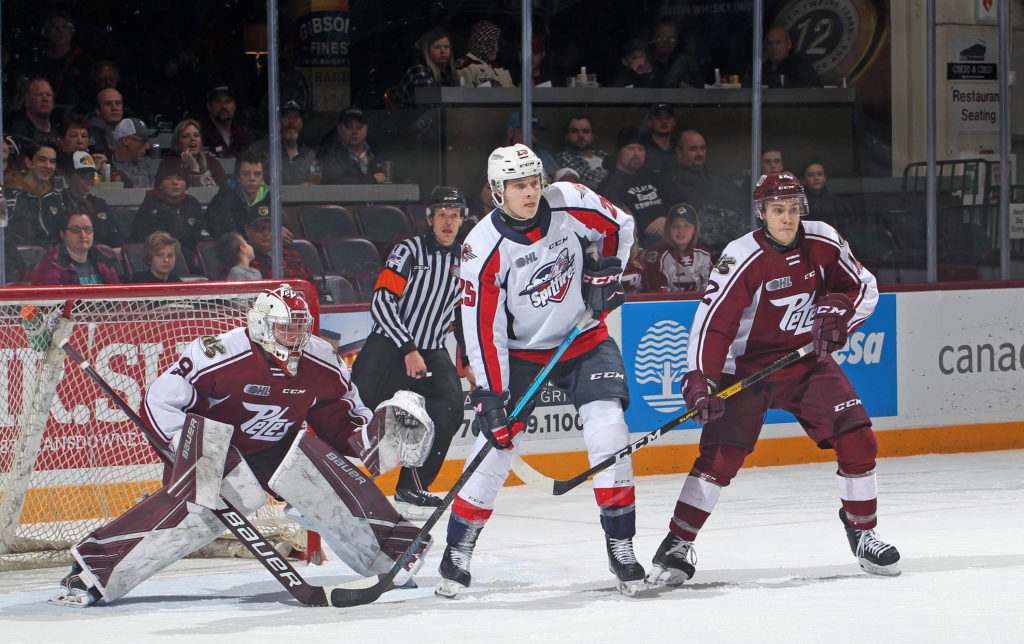 A three goal third period performance from the Maroon and White wasn’t enough to solve the Windsor Spitfires as the Petes were unable to even the season series after a 7-3 loss on Thursday night at the Peterborough Memorial Centre.

It was a tough opening period for Peterborough as they were tasked to killing a hooking infraction. The Lift Lock Lads didn’t let that phase them as they generated numerous scoring chances but Kari Piiroinen stood tall, no matter how hard the Petes fought.

The Memorial Centre became quiet and the Petes lost momentum as three quick goals at the end of the frame by the visiting Spitires put them in a hole they couldn’t get out of. Captain Luke Boka squeaked the puck past Jones with lots of bodies in front, then Kyle McDonald lengthened the Spitfires lead 2-0 shortly after. The Petes tried to stop the bleeding but Curtis Douglas won the face off cleanly to allow Cole Purboo’s wrist shot beat Jones low blocker side on a five minute power play.

Despite down 3-0 after 20 minutes, Peterborough was successful in the face off circle and only trailed 13-9 in shots.

The Spitfires started the second period the same way they ended the first period by scoring three goals in six minutes. The first two goals were from the point as Ruben Rafkin and Connor Corcoran gave the Spitfires a 5-0 lead while on the power play and Egor Afanasyev finished Jones’ night with the sixth goal of the game.

Bench boss Rob Wilson substituted Jones for Tye Austin to spark the Maroon and White to turn things around, and a heavy-weight tilt between John Parker-Jones and Joseph Rupoli ignited an even bigger spark for Peterborough as they began skating, generating chances and kept Piiroinen busy for the remainder of the second period. Peterborough’s hard work led to a power play opportunity as Winnipeg Jets prospect Declan Chisholm was tripped.

Despite trailing on the score clock, the Petes continued to dominate in the face off dot.

The league’s ninth overall power play unit took the ice to start the third and after a few moments of setting set up, a beautiful pass from Semyon Der-Arguchintsev to captain Zach Gallant put the Petes on the board. Gallant scored his career-high 25th goal while his stick was on the ice and had an open net to beat Piiroinen to sound the goal horn. Nick Robertson picked up the secondary assist, extending his point streak to 16 games.

While on another power play, Gallant scored his second goal of the night as he deflected Chisholm’s shot standing in front of Piiroinen to cut the Spitfires lead to 6-2. Der-Arguchintsev picked up his team-leading 57th assist and Chisholm is tied for first with 50 assists in the OHL among defencemen on the play.

GALLY AGAIN! @zachgally with another PP redirect to close the gap a little more! This time @chis_decs and @semder009 combine for the assists. 6-2 Spitfires.#GoPetesGo | #SJSharks pic.twitter.com/UULu2eOUAh

The Petes continued to roll as Peterborough native J.R. Avon deflected 2019 first round import draft David Maier’s wrist shot while standing in front of Piiroinen to cut the  Spitfires lead in half. Maier and Tucker Robertson picked up the helpers on Avon’s third goal of his rookie campaign.

J.R.! @david_maier17 sends a wrist shot off of @Avonjr_1010 to cut Windsor’s lead to 6-3! @Robertson_62 is credited with the secondary assist.#GoPetesGo pic.twitter.com/yJu42aW9W3

Rob Wilson pulled Austin for the extra attacker, and while the Petes’ top line was on the ice, they generated numerous chances but couldn’t solve the Spitfires. Windsor takes the 2019-20 season series 2-0 after a 7-3 victory in their only visit to the PMC this season.

Final shots were 31-29 in favour of the Spitfires. Rafkin, Gallant, and Afanasyev and were named the game’s First Choice Haircutters first, second, and third stars of the game, respectively. The Mark’s Hardest Working Pete was John Parker-Jones.  Austin stopped all 11 shots faced in relief of Jones.

The Peterborough Petes will travel to Owen Sound to take on the Attack on Saturday, February 15 at 7:30 PM before hosting the Sudbury Wolves on Monday, February 17 at 2:05PM. Fans are invited and encouraged to bring their skates as the Petes will be hosting a free post-game skate following Monday’s Family Day game.