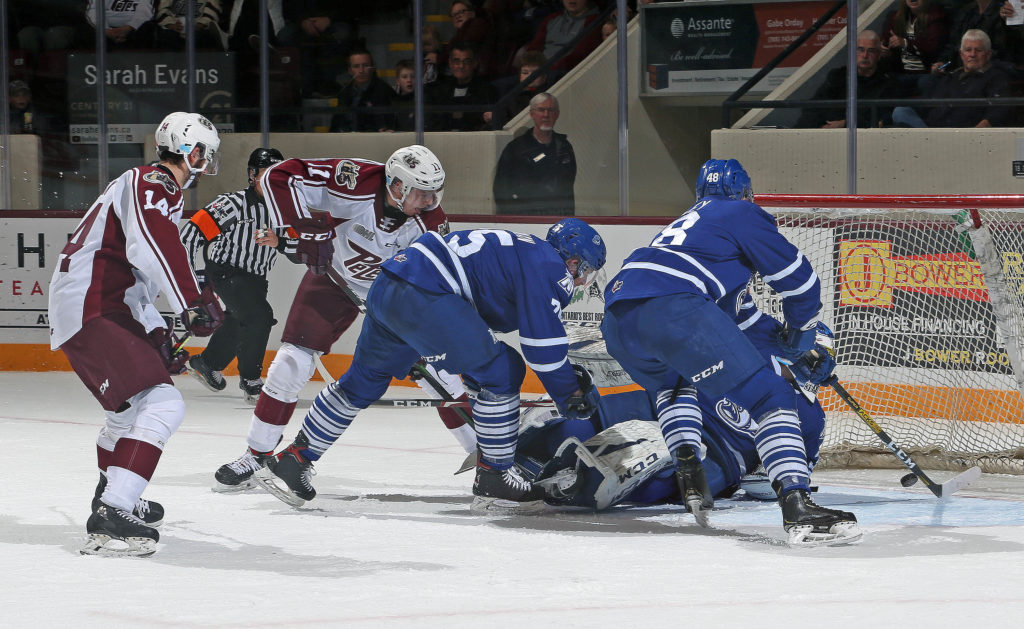 Sunday’s game marked the return of Nick Robertson to Peterborough’s roster. The timing couldn’t have been better as the flu-ridden Petes have been struggling to ice a full lineup. The injection of the American Junior Team forward wasn’t enough to lift the Petes over the surging Steelheads, who after Sunday’s 7-3 win are 6-3-0-1 in their last 10 games.

The Steelheads got to work early, cracking open the scoreboard 2:43 into the matinee match up. Nicholas Canade tipped a Thomas Harley shot past Hunter Jones.

After the teams each killed a minor penalty, Mason McTavish was quick to respond for the Petes. After numerous shot attempts that were repeatedly turned away by Mississauga goalie Kai Edmonds, the reigning OHL Player of the Month finally found twine for his 25th of the season. Nick Robertson and Declan Chisholm earned assists on Peterborough’s only goal of the frame.

The Fish found a way to get back in front thanks to a slick feed from Chas Sharpe to Peterborough native Calvin Martin, restoring their one goal lead at 13:34.

After a close chance for Cameron Butler in Peterborough’s offensive end, a Mississauga rush back the other way led to a centering pass from Ty Collins to William Portokalis. A bouncing puck found its way between Jones and his post for the Steelheads to go up 3-1.

It wasn’t for a lack of shots that the Petes found themselves down by two goals after 20 minutes, having fired 21 Edmonds’ way.

It was a long time coming, but overage rearguard Jacob Paquette finally netted his first goal as Pete as the Maroon and White returned to the ice for the second frame. A good cycle from Max Grondin and Matt McNamara reached Paquette on the point from where he fired the puck past Edmonds to bring the Petes within one.

After killing a too many men call, the Steelheads doubled back up on the visiting Petes. A trickling rebound danced through the crease until James Hardie was able to get a stick on it and bang it into the back of the net 6:51 into the period.

The conference rivals one again exchanged penalties, and although the Steelheads escaped from theirs unscathed, the Petes weren’t so lucky. With a man in maroon in the box, Richard Whittaker buried a Canade rebound with just 1.1 seconds left to play in the second stanza, tallying Mississauga’s eventual insurance marker.

Peterborough still held the shot clock advantage and continued to do well in face off wins, but it wasn’t translating to the scoreboard.

Whittaker adds one on the PP for Missy with 1.1 seconds left in the second.

An early Petes penalty put this one further out of reach as Canade added his second of the afternoon off of a Whittaker rebound, extending Mississauga’s lead to 6-2.

While not able to capitalize on two man advantage opportunities through the final 20 minutes, the Petes managed to add one more notch on the scoreboard. Grondin scored from the side of the net off of a Nick Robertson shot for his 8th goal of the year and second point of the night.

GORDO! @GrondinMax cuts the lead to 3 with 26 seconds to go in this one. @nickrob2001 collects his second assist of the game. 6-3 Steelheads.#GoPetesGo pic.twitter.com/zt74OSE4C1

Canade sealed his club’s 7-3 victory by completing a hat trick with just 20 second lefts to play.

Canade, Edmonds, and Hardie were named the game’s first, second, and third stars.

The Petes are on home ice twice this week, hosting the Owen Sound Attack on Thursday, January 9 and the Ottawa 67’s on Saturday, January 12.