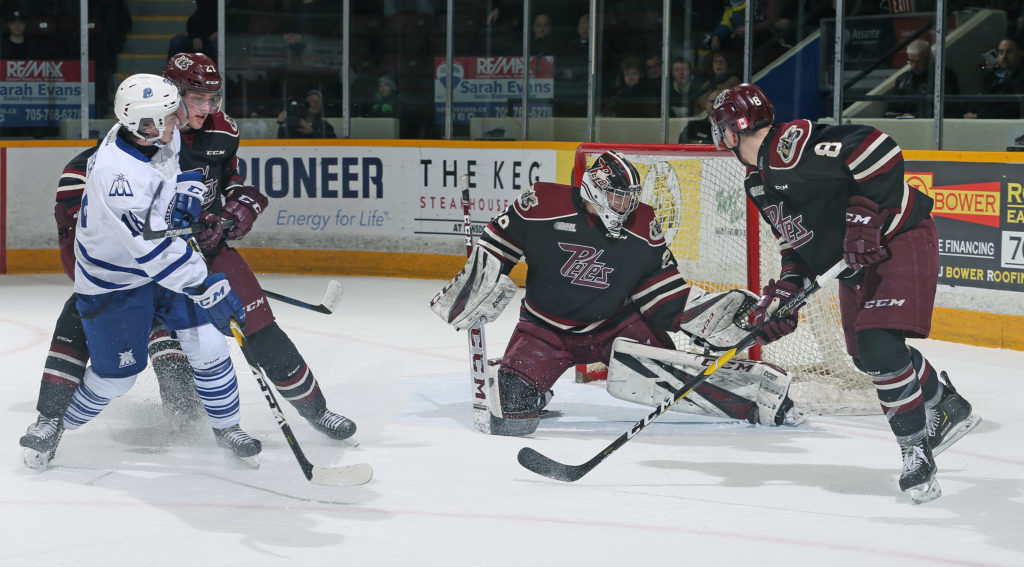 The Petes opened 2019 at home against the same team in which they closed 2018, having defeated Mississauga in a shootout on December 29. Unfortunately it would not be the case, as this time it was the Steelheads that came out ahead 6-5 after extra time.\

The game kicked off on a high note as the OHL Petes welcomed all eight ‘AAA’ Petes teams to centre ice.

The opening period was quiet for 18 minutes until the Steelheads struck the first mark with 2 minutes remaining to take the match 1-0 as Keenan Washkurak buried an Alan Lyszczarczyk.

It wasn’t long before the Petes retaliated, and Nick Isaacson found Brady Hinz to tie it at a single point each just before time ran out.

Mississauga would take back the lead early in the second as they scored the opening goal of the period when Washkurak and Lyszczarczyk connected again, with Cole Carter getting in on the power play marker.

with 10:35 on the clock Peterborough would find the equalizer once again as captain Zach Gallant, back in action after missing 28 games to an October injury, took a feed from Declan Chisholm and Erik Cermak to mark his return.

AYE AYE, CAPTAIN! @zachgally, in his first game back from injury, finds the equalizer with a blast from the point! Assists: @chis_decs and @CermakErik! 2-2!#GoPetesGo pic.twitter.com/rELktpQtpM

It was not the last that Mississauga netminder Jacob Ingham would see of the Petes as Nick Robertson fired a rocket courtesy of Chris Paquette to give the Electric City Kids the 3-2 lead going into single digits remaining in the middle frame.

ROBBY! With a little help from those PMC boards, @nickrob2001 one-times it past Ingham for Peterborough's first lead of the night! @Chris_paquette9 registers a helper.#GoPetesGo pic.twitter.com/3XP8gPbns3

Without giving Ingham much of a chance to breathe, the home team increased their lead to 4-2 with a Liam Kirk shot which found Cameron Butler, allowing the Petes to take their first lead of the evening.

BUTSY! @kirky_1424 digs the puck out of the corner and dishes to @CButler_21 in the circle so he can send it into the cage! 4-2 Petes!#GoPetesGo pic.twitter.com/nLzDXtWAYA

The Steelheads would drop Peterborough’s lead back to one goal as Carter and Thomas Harley rocked the puck to Lyszczarczyk, allowing him to rifle it past Hunter Jones on a man advantage before the end of the frame.

Shots on goal were 37-32 in favor of Peterborough, with Peterborough sending 27 shots to the Mississauga net in the second stanza.

Turned on the offence in the middle frame – 28 shots in the second period alone for your Petes!#GoPetesGo pic.twitter.com/2OinnC4416

The final period would be punctuated by an early Peterborough goal which came from the combined efforts of Adam Timleck, Robertson, and Paquette to make it 5-3 in favour of the hometown boys just two minutes into the frame.

PAQ! @Chris_paquette9 tucks the puck into the top corner with a backhander and we're back ahead by 2! Great passes from @AdamTimleck and @nickrob2001 on the play. 5-3 Petes!#GoPetesGo pic.twitter.com/xcLh4m3493

The Fish struck back to once again get within a single goal as Harley and Liam Ham assisted Cole Schwindt on the power play to put the score at 5-4.

Lyszczarczyk would score once more at 1:20 assisted by Schwindt to send the game to overtime.

Despite an OT power play opportunity for the Petes, neither club would score in the overtime period, forcing the teams into their second shootout situation in five days.

In the end, the Petes would drop their first home game of 2019 6-5 to Mississauga.

Final shots finished 47-44 in favour of the Petes.

Lyszczarczyk, Paquette, and Gallantwere named the game’s first, second, and third stars, while Jones was named the Mark’s Hardest Working Player of the Game.

The Petes are on the road in Kingston on Friday, January 4 at 7:00pm and in Mississauga on Sunday, January 6 at 2:00pm. They’re back on PMC ice for a three-game homestand, starting with the rival Oshawa Generals at on Thursday, January 10th at 7:05pm.