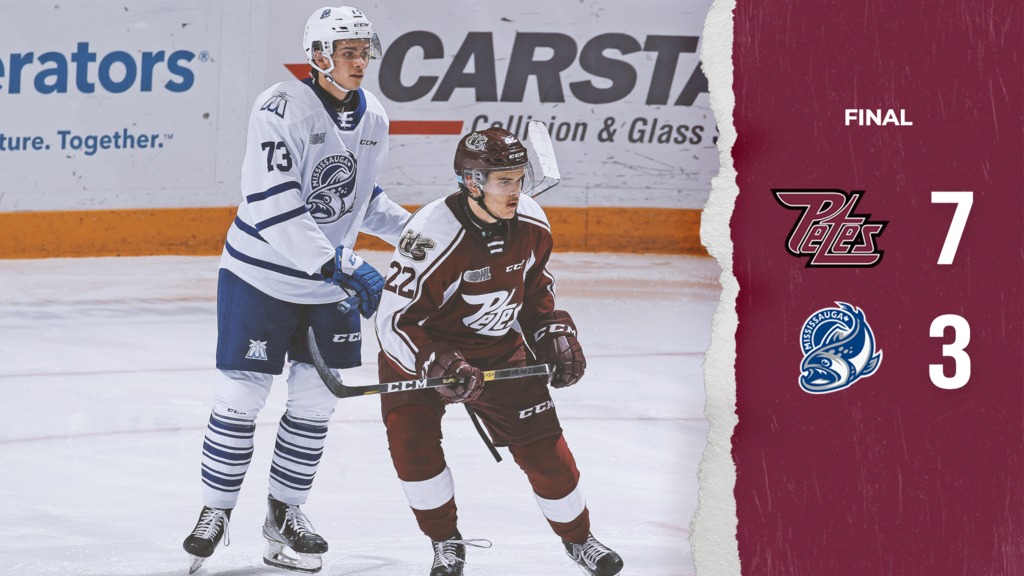 Still buzzing after a dominating win at home against the rival Oshawa Generals on Thursday night, the Peterborough Petes traveled to Mississauga to take on the Steelheads for their first meeting of the season. It will be a battle for third place as only one point separates the Petes (3rd) and Steelheads (4th) in the standings. Michael Simpson, the OHL’s current leader in goals against average, save percentage, and shutouts, would get his second start in as many days after shutting out the Generals the night before. Overage forward Sahil Panwar would hit a milestone on the night, as he would be playing in his 150th OHL game.

The Petes would spend the first part of the game in the defensive zone, with Mississauga in control after coming out firing on all cylinders. Michael Simpson would stop the attack on multiple occasions to keep the game scoreless. At the ten minute mark, the game would seem to completely switch momentum, as the Petes would begin to get comfortable and start to pressure Steelheads goalie Alessio Beglieri. The Steelheads would fall into some penalty trouble at the 11:47 mark, taking two within 15 seconds of each other leading to a 5 on 3 advantage for the Petes. The Petes would have multiple chances, including a Brennan Othmann crossbar, but it wouldn’t be until the last 15 seconds of the powerplay when Chase Stillman would get a puck in front and put it past Beglieri to make it 1-0 Peterborough. The Petes would take a 1-0 lead into the break, despite being outshot 12-10 in the frame.

The second period started off with a bang, as only 21 seconds in Chase Stillman would turn and fire a Steelheads clearing attempt at Beglieri that would find its way through to give the Petes an early 2-0 lead. The game would stay 2-0 until 12 minutes into the period, when Chase Stillman finished a Sam Mayer pass to complete the natural hat trick. That goal would open the floodgates as Tommy Purdeller and Sahil Panwar would both score before the end of the second to give the Petes a comfortable 5-0 lead heading into the intermission.

Simpson’s bid for a second straight shutout was thwarted 4:12 into the third period, when Zakary Lavoie would beat Simpson to cut the Steelhead deficit to 5-1. Simpson’s shutout streak would officially end at 100 minutes and 30 seconds between goals. Just when the game looked to be set in stone, Chase Stillman would intercept a pass and score his fourth of the night. With three goals coming into the game, Stillman’s four goals on the night would more than double his total for the season. Nick Lardis would add another goal one minute later to make it 7-1 Petes. Brice Cooke and Owen Beck would add a goal each late for Mississauga, but the Petes would prevail by a score of 7-3.

Chase Stillman led the way for the Petes with four goals and one assist. Tommy Purdeller, Nick Lardis and Sahil Panwar each had a goal. Brennan Othmann would add two assists and Michael Simpson stopped 31 of 34 for his ninth win of the season.

The Petes next game is Diabetes Night at the PMC on Thursday, November 24th when they host the Sudbury Wolves. Diabetes night is a personal initiative for Petes goalie Michael Simpson, who lives with Type-1 diabetes. The Petes have partnered with Tandem Diabetes Care to raise awareness and money in support of Diabetes Canada. To buy tickets, click here. To donate, click here.