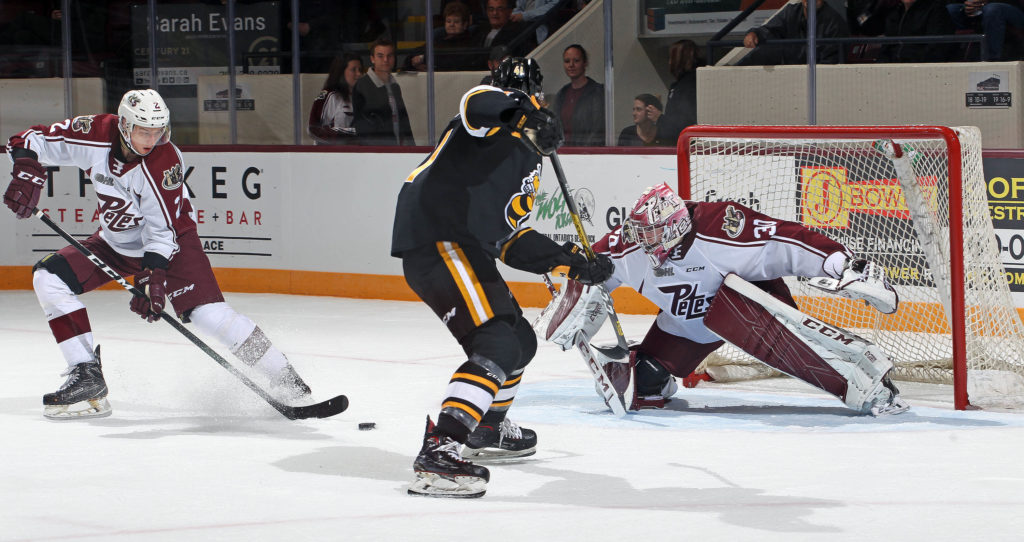 The Petes and Sarnia Sting – two teams on three game winning streaks – faced off for the second time this season at the Peterborough Memorial Centre. Although the maroon and white took their first match up of the season 6-3 in Sarnia on October 11, it was the Sting that extended their streak to four games on Thursday night.

The Petes weren’t off to the start they were looking for as they were penalized early in the game. Sarnia’s fourth overall power play unit converted as Anthony Tabak made a cross-ice pass to Justin Nolet who scored his first OHL goal, leaving no chance for tonight’s starter, Tye Austin.

A short time later, the Petes tried to dump the puck out of their own zone, but the puck went high in the air as players from both teams were looking for it. Sean Josling was the only one who found it as he banked it past Austin for his team leading ninth goal.

Even though the Petes were trailing early, they gained momentum with numerous shots and opportunities. Rookie Mason McTavish showed off his speed as he skated past a Sting defender which led to a two-on-one. McTavish passed the puck to 2020 NHL draft eligible Cameron Butler who deked out Langevin but just missed the net.

As the Petes started to take control of the game, they were penalized for hooking. The Sting converted on the power play as Austin made a cross-crease save, but the Sting took advantage of the bounce and Brayden Guy gave the Sting a 3-0 lead as the first period winded down.

Moments later, a tripping infraction was called against the Sting. The visitors tried to get the puck out but Declan Chisholm prevented the puck from exiting the offensive zone. Chisholm passed the puck to Nick Robertson who found Gallant as he squeaked one past Langevin. Chisholm extended his point streak to 12 games on the play.

AYE AYE, CAPTAIN! @zachgally squeaks the puck past Langevin to get the Petes on the board on the PP! Helpers from @chis_decs and @nickrob2001! 3-1 Sting with just over 2 minutes left in the first.#GoPetesGo | #SJSharks pic.twitter.com/kHjSnm5VOB

Shortly after Gallant converted on the power play, he was awarded a penalty shot, but was denied.

The Sting extended their lead 4-1 halfway through the second period after a hooking penalty was called against the Petes. Sting captain Ryan McGregor used his speed and patience as he scored his second goal of the season.

The Petes came out in the third desperately seeking for a win as a pair of Toronto Maple Leafs prospects set the tone for Peterborough. Semyon Der-Arguchintsev forced a turn over and made a tape-to-tape pass to Robertson. He used his fast acceleration which earned him a breakaway and he beat Langevin five-hole to cut Sarnia’s lead in half.

After a couple of posts in the third and a few chances, it wasn’t enough as the Sting took this victory 4-2.

Langevin, Nolet, and Gallant were named the First Choice Haircutters first, second, and third stars of the game, while Nick Robertson earned the title of the game’s Mark’s Hardest Working Pete.

Peterborough’s next home game is on Saturday, October 26 at 7:05pm when they host the Mississauga Steelheads. Tickets for all regular season home games are available through the PMC Grant Thornton Box Office in person and over the phone at (705) 743-3561 Monday to Friday from 9:30am to 5:00pm, and 24 hours a day online.