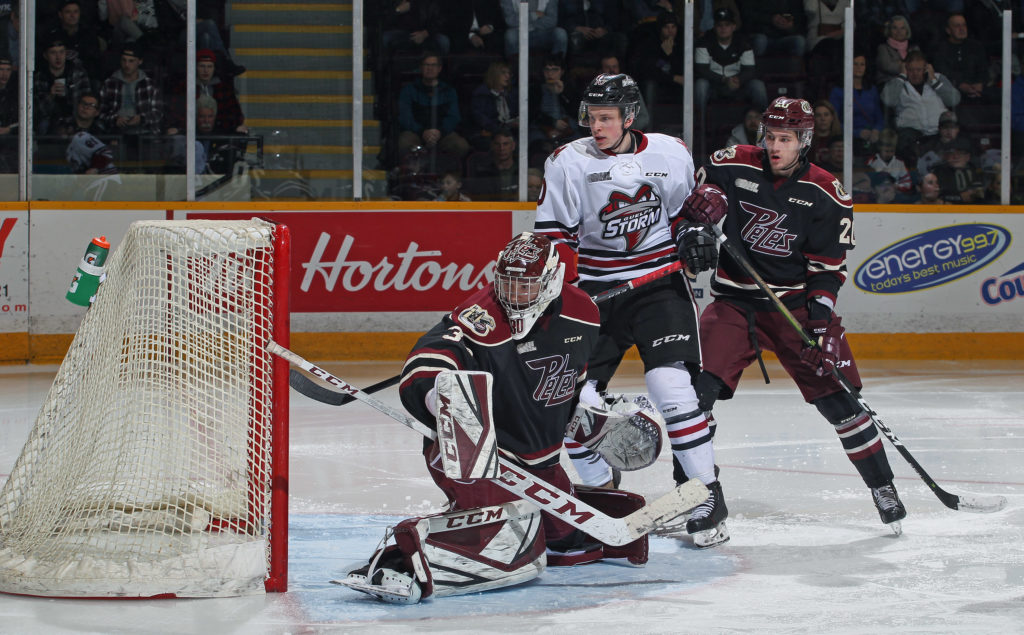 Coming out of a two-game losing streak, the Petes welcomed a restructured Guelph team to town for the last game of their home stand. In the first game of back-to-back three-in-threes, the maroon and white fell just short of a comeback in a 5-3 loss to the Storm.

The first goal came from a Guelph stick as Alexey Toropchenko took assists from Liam Hawel and Nate Schnarr to put the Storm on the board 1-0 early in the opening period.

The Storm soon followed up with a goal from Keegan Stevenson courtesy of Peterborough native Cedric Ralph and Owen Lalonde to take the lead by 2-0.

With eight minutes left on the clock a third Storm shot from Toropchenko and Fedor Gordeev found Hawel who potted it to substantially increase Guelph’s lead.

The visitors were not done there, and this time it was Philadelphia Flyers prospect and Storm captain Isaac Ratcliffe who brought his team’s lead to a significant 4-0 in the first period. He was assisted by Maple Leafs prospect Sean Durzi and Edmonton Oilers prospect Dimitri Samorukov.

The opening period would close on a four-goal Storm lead as they also held the lead in shots on goal by a significant 22-7.

Faceoffs and powerplay % are tied after the first period. #gopetesgo pic.twitter.com/XKI0RBLO1A

The second period was instantly punctuated 59 seconds in with a Petes goal as Semyon Der-Arguchintsev was assisted by Adam Timleck and Nick Robertson to put Peterborough on the board 4-1.

Three minutes later the Petes planted another to drop the Storm to a two goal advantage as Erik Cermak was found by Chris Paquette and Brady Hinz.

With the Storm down a man,  Peterborough took the power play opportunity to find their groove and blast to within one goal when Hinz was found by Cermak and former Storm star Ryan Merkley to bring the game to 4-3.

Forty minutes would end with the Storm leading by a single goal and remaining in control of the shots 30-23.

After two periods, we're down 4-3. But, like, absolutely happy to be here.

With the final period holding a quiet pace throughout the night save for an unassisted Ratcliffe empty netter, the game would end on a 5-3 Storm victory.

Hawel, Hinz, and  Toropchenko were named the game’s first, second, and third stars, with Tye Austin named the Mark’s Hardest Working Player of the Game after coming in to relieve Hunter Jones in the second period.

The Petes return home after a trip to Ottawa to welcome the Sarnia Sting to the PMC on Saturday, January 19th at 7:05pm.

Petes Holiday Flex Packs are still available for three games. For just $59.99 (tax included), fans will receive two Petes holiday mugs, two $2 Tim Hortons Tim Cards, and four flexible ticket vouchers to be used for any Petes home game in January. The regular price of this package is $118, which means fans save almost 50% on the special offer. Contact Mike at (705) 743-3681 x 263.