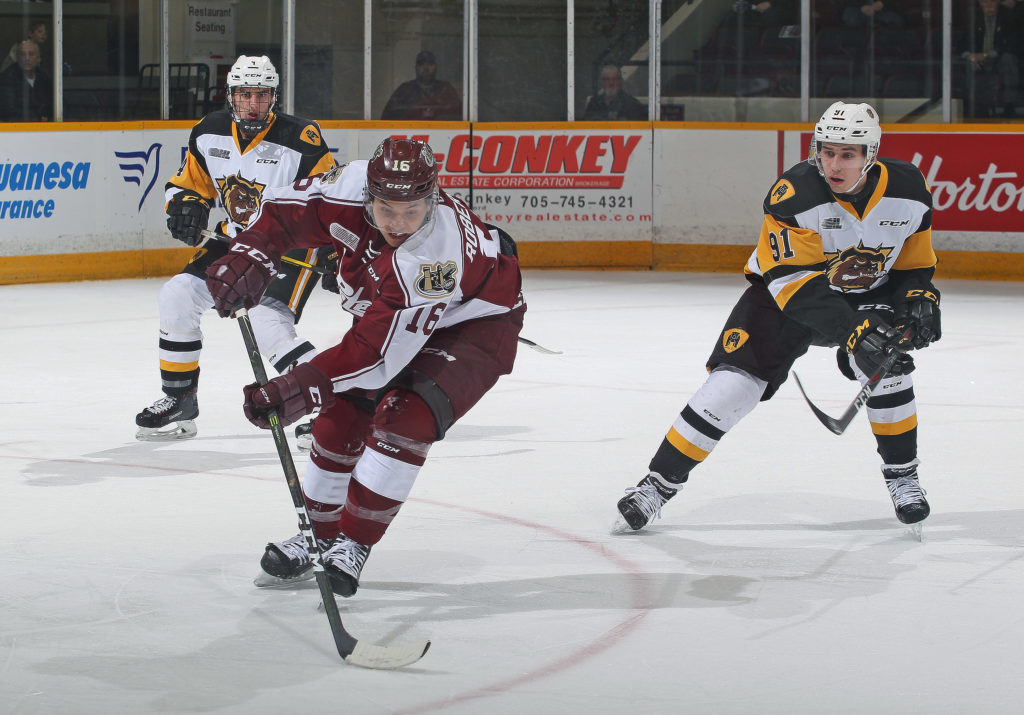 The Petes climbed back from a two goal deficit and took a third period lead, but couldn’t hang on as the Bulldogs scored three unanswered markers on route to a 6-4 win in Hamilton on Saturday night.

Philadelphia Flyers prospect Matt Strome opened scoring for the Bulldogs at 11:39. After banging away at the puck on one side, Arthur Kaliyev brought it behind the net to find Strome alone on the other side.

It was a nearly identical goal by Zach Gallant that tied the game for the first time, with Brady Hinz and Declan Chisholm assisting on the 15:28 marker.

GALLY! The captain makes his mark from the door step with help from @BradyHinz and @chis_decs! We’re tied at 1!#GoPetesGo pic.twitter.com/EpzrFMjgkB

The Bulldogs held a solid advantage on the shot clock through 20 minutes.

Nearly identical goals have us all tied up after 20 minutes!#GoPetesGo pic.twitter.com/inTHJj9icB

After killing off an early penalty in the middle frame, the Petes suddenly found themselves down 3-1 after two quick goals by the Bulldogs.

The first came from Kaliyev who wrapped around the net the puck and lifted a backhand shot over Hunter Jones at 4:54. Jan Jenik followed up 25 seconds later by dangling around Peterborough’s defence before catching the inside of the post on Jones’ blocker side.

An unsuccessful power play attempt would precede two Peterborough goals to tie the game at 3.

Matt McNamara buried his third of the season after being found by Gallant and Nick Robertson.

Cameron Butler had some help from former Pete Cam Supryka who redirected Butler’s centering pass from behind the net past Nick Donofrio.

Peterborough killed off their second infraction of the evening in the dying minutes of the stanza, which saw each team duplicate their first period shot output.

The Petes would take their first lead of the game 2:48 into the final period as a result of a defensive zone face off win by Chris Paquette. Butler earned his second point of the night while Liam Kirk registered his first.

The lead was short lived, though, as Hamilton responded with three unanswered goals from Jenik, Tim Fleischer, and Logan Morrison to secure a 6-4 win and the season series between the East Division clubs.

Jenik, Kaliyev, and Gallant were named the game’s first, second, and third stars, respectively. Final shots were 32-15 in favour of the Bulldogs.

The Petes are back in action on home ice on Family Day when they host the Niagara IceDogs on Monday, February 18 at 2:05pm. The game will be followed by a FREE Skate with the Petes sponsored by Russelle Toyota. Tickets are available through the Baker Tilly Box Office in person, over the phone at (705) 743-3561, and online.