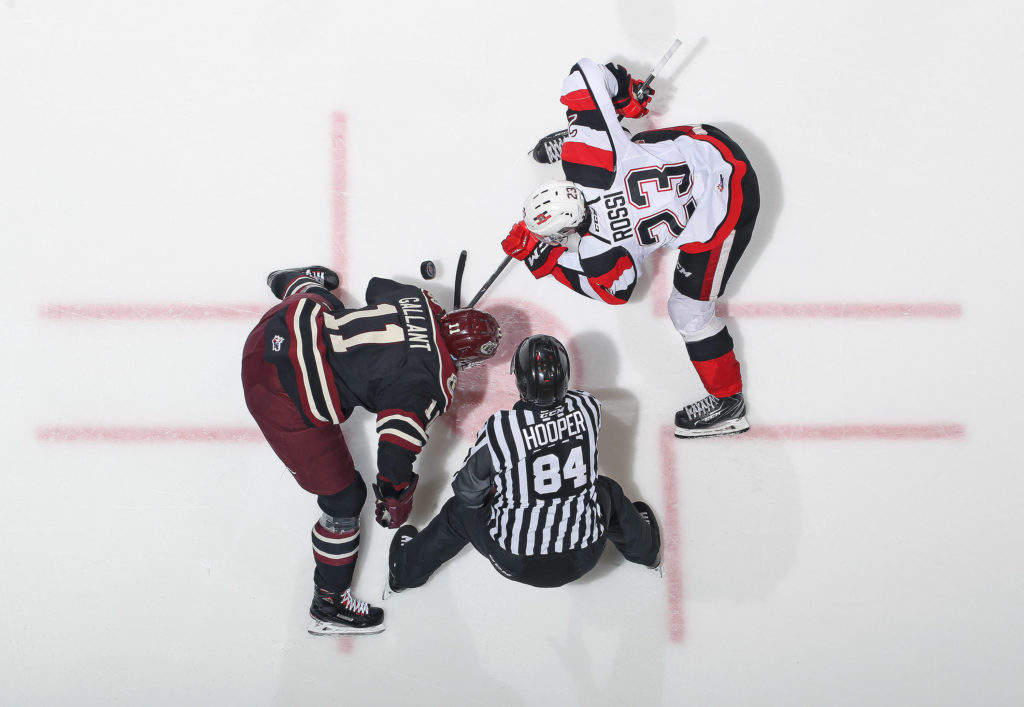 For the second time in ten days, the Petes have taken down the country’s top ranked team. This time it was with a 3-2 win over the 67’s in the Nation’s Capital on Sunday afternoon.

The opening frame was a quiet one, with both teams sitting back early on to settle into the matinee match up. The pace picked up as the game went on as Peterborough fired the majority of their first period shots on Cedrick Andree in the middle of the stanza.

Later in the period, Hunter Jones was tested with a handful of challenging 67’s shots but appeared up to the task.

With no penalties charged to either club, they headed off the ice after 20 minutes with a 0-0 score.

Couple of goose eggs on the board after 20!#GoPetesGo pic.twitter.com/YAsOS2TZIE

An early second period infraction by Kevin Bahl sent Peterborough to their first power play of the game, and it didn’t take them long to convert on the chance.

Zach Gallant skated puck out of the corner and into the slot, firing a shot on Andree. The rebound jumped out in front, and after bouncing off a few bodies, Nick Robertson shoveled the puck behind Andree to scored his team-leading fourth goal of the year.

Unhappy with a hit on a fellow teammate, Gallant engaged Merrick Rippon in some extracurricular activities that would send Ottawa to their first power play of the afternoon.

The Petes successfully killed of the charge, but shortly after the teams returned to even strength the 67’s would get on the board. A blast from the point by Noel Hoefenmayer was tipped past Jones by Mitchell Hoelscher 7:17 into the period to tie the game at 1.

As quickly as Ottawa tied the game, the Petes took back the lead even quicker.

Mason McTavish, who was welcomed back to his hometown with a solo lap before warmups, and Max Grondin broke into the Ottawa zone two-on-one. McTavish released a quick shot on Andree but it was Grondin who put the rebound into the back of the net to restore Peterborough’s one goal lead just 36 seconds later. Fellow Ottawa native Cameron Butler also assisted on Grondin’s first tally of the season.

Offsetting minors were followed up a Petes penalty, giving Hoelscher the opportunity to score his second of the game, this time on the power play, to once again tie the game. Jack Quinn and Graeme Clarke combined to set Hoelscher up with just over five minutes remaining in the frame.

With special teams finally getting a chance in this one, they made their marks to get a couple of goals on the board. Despite a healthy Petes lead on the shot clock, the score remained tied after two periods of play.

Goals, saves, fisticuffs – the second period had everything! Still tied up through 40 minutes.#GoPetesGo pic.twitter.com/4xP2GWDwjp

An early penalty kill by the Petes set the tone for the remainder of the game. After the teams exchanged too many men calls, Peterborough came on in full force, looking to take back the lead.

It was overager and second year captain Gallant that stepped up to put away the game winner and his first goal of the year. Some pretty passing from Declan Chisholm to Semyon Der-Arguchintsev then found Gallant alone in front of the Ottawa net. After a backhand shot on goal, Gallant sent his own rebound past Andree with 6:55 left to play.

O CAPTAIN, MY CAPTAIN! @zachgally completes the Gordie Howe hat trick after burying his own rebound! SDA assists on the go-ahead marker. 3-2 Petes with 6:55 to go!#GoPetesGo pic.twitter.com/W93lVbt4VV

Limiting their chances at another game tying goal, Hoefenmayer was sent off for tripping. A successful penalty kill was followed up by Andree being called to the bench to add an extra attacker, but some big blocks from Gallant and Butler in the final ten seconds secured the win for the maroon and white.

Next up for the Petes, they’ll embark on an unusually long 11 day road trip this week, first visiting the North Bay Battalion on Thursday, October 3 at 7:00.