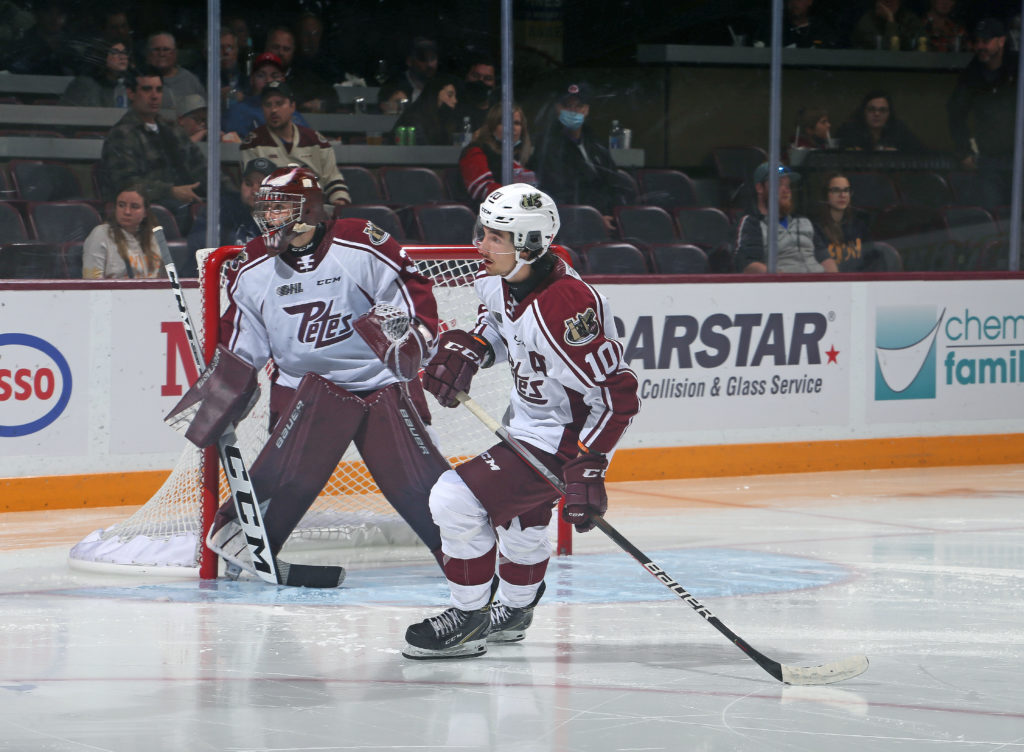 The surging Petes (4-5-0-0) are set to face the North Bay Battalion (6-5-0-0) this Thursday, Nov. 4 at the Peterborough Memorial Centre. North Bay is currently first in the Central Division.

Peterborough is riding some serious momentum after second-year centre Tucker Robertson was named OHL Player of the Week on Nov. 1 after he produced three goals and two assists over a pair of victories against tough competition last week. Robertson, the Petes points leader, was named first star of the game for both contests. He contributed a goal and two assists on Oct. 28 and produced incredible stats in the faceoff circle, winning 21 of 29 attempts in a 4-3 win against the East Division leading Hamilton Bulldogs.

The 2019 fourth round, 72nd overall selection in OHL Priority Selection followed up that performance a couple nights later with his first career two-goal game, scoring just three minutes and 17 seconds apart to give Peterborough a three-goal lead that led to a 5-4 defeat of the Niagara IceDogs.

The Petes scored by committee last week. Six Petes registered a goal and on Saturday night, four Petes recorded their first OHL point. Zack Lewis blasted the puck past Niagara netminder Tucker Tynan in the slot on a one-timer for his first OHL goal and point. Jaden Reyers skated around the net to thread the puck into Lewis’ wheelhouse earning him his first assist.

.@ZackLewis23 beats Tynan five-hole for his first-career OHL goal! @ksmitty91 and Jaden Reyers pick up the helpers on the game's opening goal!#GoPetesGo pic.twitter.com/H9RLsy2bYQ

The accolades continue with Emmett Sproule, who has had the hot stick all season, extending his point streak to nine games on Saturday night against the Niagara IceDogs. Ryan Gagner fed Sproule the puck to collect his first OHL assist. Keegan McMullen provided the game-winning goal assisted by Sam Alfano and Donovan McCoy. Alfano and McCoy recorded their first assists of the season and in the OHL.

This Thursday marks the first meeting between Peterborough and North Bay since the two teams met on Thursday, October 7 in the Battalion’s home opener. The Petes couldn’t handle Edmonton Oilers prospect Matvey Petrov, who scored four goals and recorded an assist in a 7-4 win over the maroon and white. The Petes hold a 6-2 edge facing the Battalion at the Centre over the last five years.

Although Peterborough’s penalty kill eliminates opportunities (73.8%) more than North Bay’s (72.1%), the clubs match in one category: their points leader each maintains 16 points with their respective team.

The Battalion’s Brandon Coe leads his team with six goals and 10 assists across 11 games. Coe is one of two overagers along with forward Mitchell Russell. Russell is fourth on the team leaderboard in total points with eight goals and four assists, tying Russian sniper Petrov, who North Bay selected first overall in the 2020 CHL Import Draft, for most goals on the team.

The Petes will be aware when Ty Nelson is on the ice. Nelson, the no. 1 overall pick in the 2020 OHL Priority Selection Draft, is utilized in every situation, and has great offensive instincts as demonstrated by six points in North Bay’s last five games.

Despite the Battalion producing strong results so far this season, the mighty maroon and white have appeared to catch their stride and produce some serious mullet-driven on and off ice synergy which is sure to fare well on the game sheet

The second-year centre always seems to shine on Thursday night. Whether it be driving the offence or winning pucks between the dots, Robertson has been absolutely spectacular every Thursday night. He has 11 points in the last three Thursday matchups.

This Thursday night, the Petes will be hosting their annual Remembrance Day Ceremony. There will be a game of Dodgeball in the first intermission. Get your tickets as low as $15 if you contact Ian MacGregor at imacgregor@gopetesgo.com.