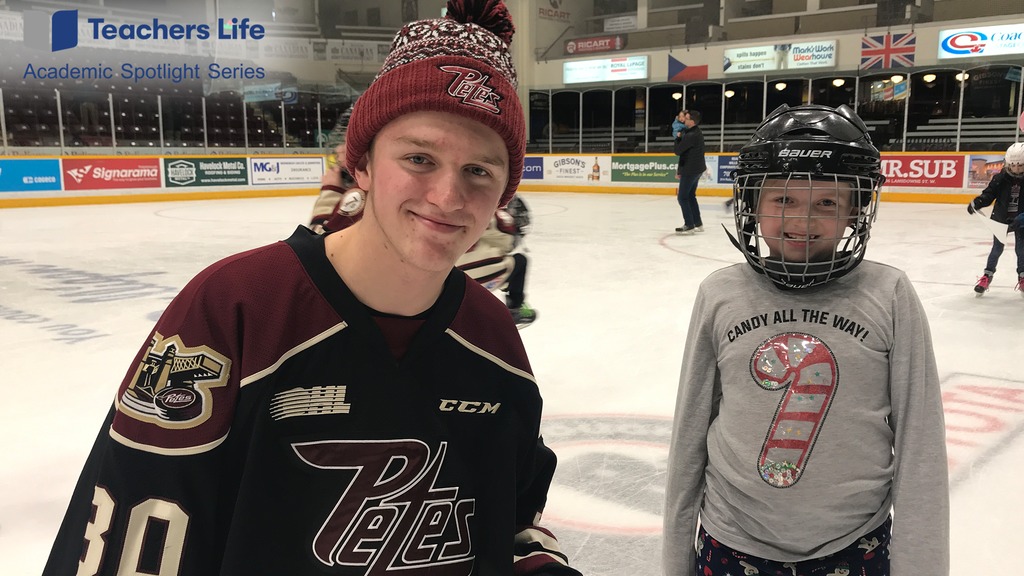 Petes goaltender Tye Austin has perfected the formula of playing hard and working smart. The Pembroke native played 19 games last year for the maroon and white and was named the OHL’s East Division Academic Player of the Month in January for the 2018-19 and 2019-20 season.

“I treat it [school] like hockey, you have to put the best time and effort into it so I face both the same way. I put a lot of work into hockey to be the best goalie I can be and I put just as much work into school so I can improve and get the best marks I can. It’s important for my future.”

Last season the 18-year-old netminder took grade 12 university-level courses in English, Functions, and Biology, boasting a 100% mark in his Math class and a 97% average.

“You have to be able to manage your time and give up certain things to do the extra work in school too and use my time wisely.”

“He’s not a guy to take time off when it comes to school or practice time, and to balance both is not easy. To have the ability to do that speaks volume of his discipline and his value on his scholastics but also on hockey. He’s been very impressive that way.” – HC Rob Wilson https://t.co/ywkoV9Zw7v

Tye points to the excellent teachers he has had that has allowed him to thrive in the classroom and on the ice.

“I’ve always had really good teachers. When I went to Peterborough Kim and Barrie Driscall [Petes former academic advisors] they helped me a lot. There are some great teachers at Thomas A. Secondary School.”

In his second year in net for the Petes, Austin held a 4.45 goals-against average and an .879 save percentage through his 19 appearances. Austin was a third round pick of the Petes in the 2018 OHL Priority Selection.

Beyond hockey the Petes goaltender has considered a career in medicine as he has his sights set on becoming a surgeon.

This academic spotlight is presented by Teachers Life.

“The dedication of the OHL’s student-athletes to their education mirrors Teachers Life’s commitments to students and educators across the province. By celebrating these athletes, they become role models to kids in their communities through their dedication to academic excellence, integrity and curiosity.”

About the Ontario Hockey League