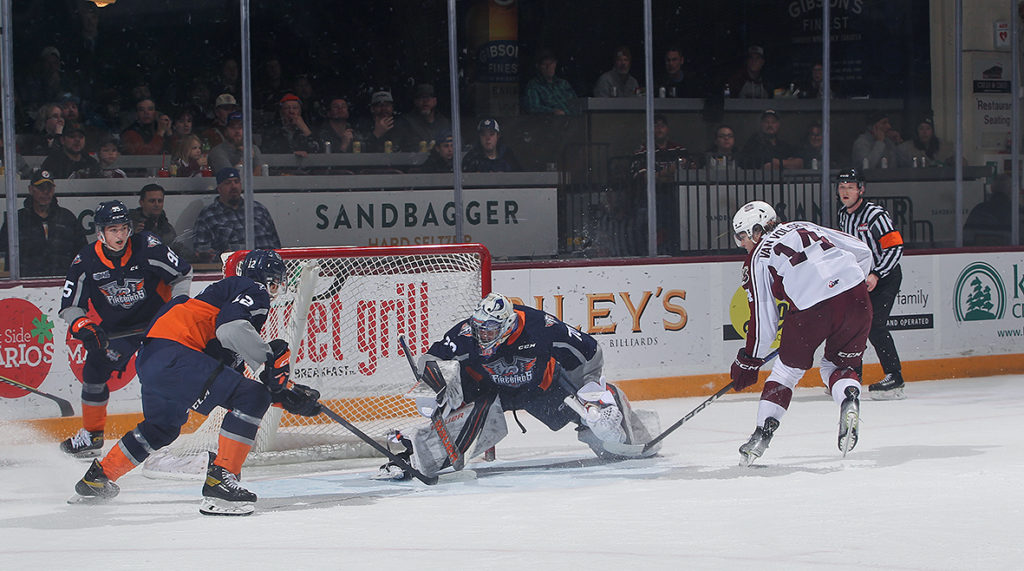 The Petes broke in December by welcoming the Flint Firebirds to the PMC for the first time since January 2020. It was the annual Teddy Bear Toss with all of the Bears going to the Move 99.7 and Pure Country 105 Christmas Toy Drive in support of the Salvation Army’s Annual Christmas Appeal. As fans eagerly awaited to make it rain with their donations, the Petes were in tough against a high scoring Flint team. Going into the game, Flint was tied with Ottawa for first in the OHL with 105 goals scored. Brennan Othmann would start against his former team for the first time, hungry to score the opening goal and let the teddy bears fall all over his new home ice.

The game did start out with an early goal only 6 minutes in. Unfortunately, the teddy bears would have to stay in their seats as it was Flint who struck first with Amadeus Lomabadri scoring his 12th of the season. Flint would follow it up with another only one minute later as Gavin Hayes would tip a shot from Peterborough native, Tyler Deline, to give the Firebirds the early 2-0 lead. Things were looking up for the Petes as they would get a powerplay at the 11:32 mark, but Flint would capitalize on an odd man rush to give themselves a 3-0 lead. The goal was the first shorthanded goal given up by the Petes this season, they were the last team in the league to surrender one. Just when it looked like the bears would have to stay seated for the intermission, Jack Van Volsen would bury a rebound on the powerplay to send them flying. A total of 1097 bears were collected in support of the United Way Christmas Appeal. Despite outshooting the Firebirds 19-10, the Petes would be down 3-1 heading into the break.

PETES FANS, thanks to you, we collected 1,097 donations in in support of the Salvation Army Christmas Appeal 🧸

The Petes came out flying in to start the second period. They would be rewarded at the 4:39 mark, when Jack Van Volsen would score his second of the game to cut Flint’s lead to 3-2. Flint would answer five minutes later, when Ethan Hay would score to restore their two goal lead. Tyler Deline picked up his second point on the goal. Just three minutes later, Amadeus Lomardi would score his second of the game to give Flint a 5-2 lead. The Petes would not go away that easy, as Sahil Panwar scored just over three minutes later to make it 5-3. The goal was Panwar’s second this season against his former team. Not to be outdone, Flint would fire right back 13 seconds later to retake the three goal lead. Just when the game looked like it might get out of hand, former Firebird Brennan Othmann would score to bring the Petes within two heading into the intermission.

The third period would see both teams pressing hard for a goal. The Petes would have multiple chances, but would not be able to beat Peterborough native and St. Louis Blues prospect, Will Cranley, who would stop 43/47 shots for the win. The Firebirds would add an empty net goal to take the game 7-4.

Jack Van Volsen led the way for the Petes with two goals on the night. Donovan McCoy added two assists, and Brennan Othmann and Sahil Panwar both scored against their former team. Sam Mayer, Connor Lockhart, Jax Dubois, J.R. Avon, Tommy Purdeller, and Chase Stillman all had an assist. Michael Simpson stopped 31/37 in the loss.

The Petes next game is Hockey for All – Neurodiversity/Sensory Awareness night at the PMC on Saturday, December 3rd against the North Bay Battalion. This night is designed to create an environment that supports all fans to have the best experience possible when attending a game. The night will include various elements specifically chosen to reduce barriers and increase comfort for those with neurodiversity and/or sensory challenges. Puck drop is scheduled for 7:05PM, you can buy tickets by clicking here.