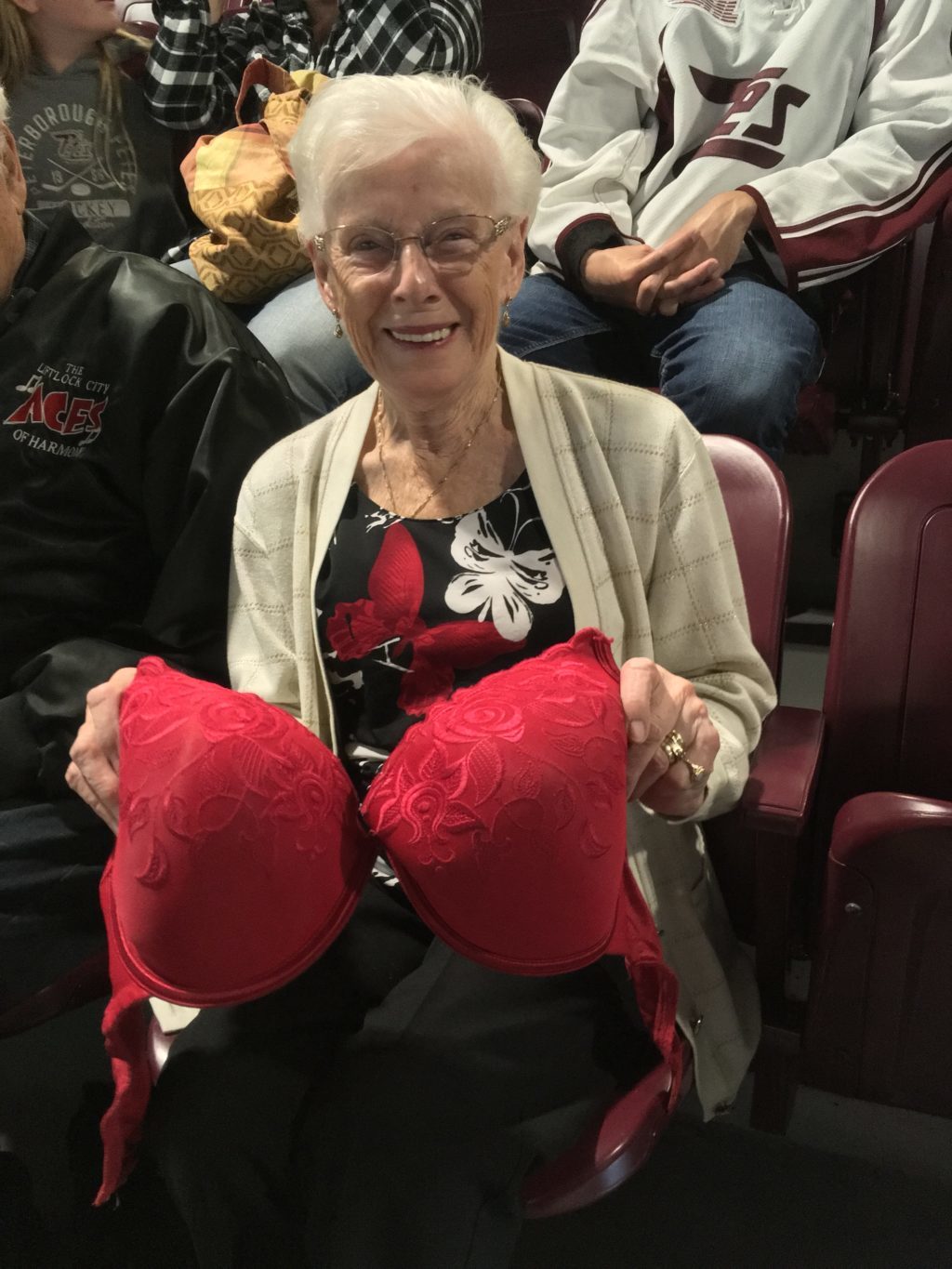 The Toronto Maple Leafs have claimed the Dart Guy (face painted, blue beard) as their unofficial mascot, and the Raptors rightfully celebrate their superfan Nav Bhatia, however, none of these figures quite compare to the Petes bra swinger, Cathy Weiss.

For 25 years, Mrs. Weiss has attended Petes home games. Her popularity among game day staff and fellow Petes fans has developed in light of her unconventional pre-game and post-goal celebrations.

As soon as the red light illuminates and the Petes’ goal siren sounds, Cathy raises a bra wider than the length of her torso and swings it above her head in celebration. The bra arrived at the Memorial Centre in her fifth year of game attendance after a male friend suggested he would swing his shirt if she swung her bra, “Then I said there’s no sense in swinging my bra, I’m still in a training bra.”  In the following game, Weiss’ peer had the maroon bra waiting for her, and it has been added to her game day ‘things to bring’ list ever since.

Before puck drop, Cathy can be found in her seat being greeted by all the ushers and friend, Dorothy Bunicka. Dorothy and Cathy’s friendship bloomed after sitting in front of one another in their previous season seats, “I love it [bra], I’ve actually swung it a few times with her.” With her pleasantly calm husband to her right and charming personality, Cathy’s networking with Petes fans is natural.

Cathy definitively declares the home games against the Oshawa Generals as her favourite, however, when determining a best-loved player she is diplomatically unwilling to choose, “You know I think they all work hard, as long as they play together they are a team.”

Originally from the West End of Toronto, Cathy is also a Maple Leafs fan, with her earliest memories of the games involving her hearing-impaired mother reading the lips of the players and reiterating their conversations to her father.

Without being clad in gaudy attire, the petite 86-year-old woman flailing a massive, ruby bra has become a component of the family zone experience, simultaneously challenging the grandmother status in the process.

Cathy has cemented herself as the ultimate Petes fan and is here to graciously disrupt hockey’s reputation of being an old boys’ club, one bra swing at a time.

Want to hear more stories like this? Click here to learn more about the Petes team chaplains Tim Coles and Dave Jones.