The challenges, rewards, and misunderstandings of scouting: Matt St. Germain 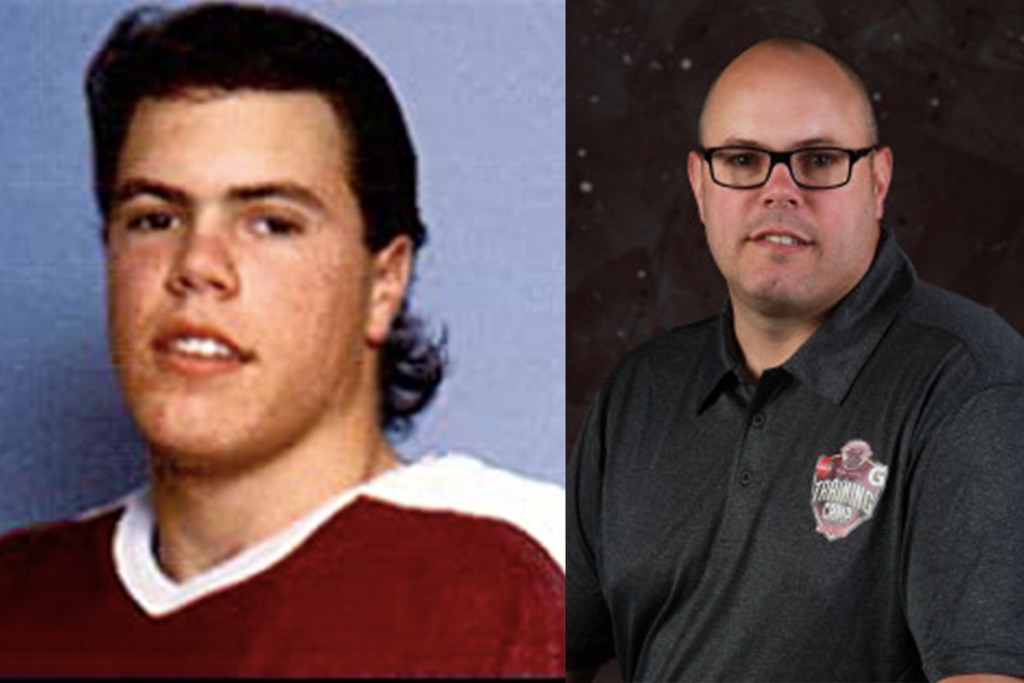 Junior hockey scouts are the initial gatekeepers between bantam and midget hockey players and the OHL. Sitting in the top rows of frozen community arenas, they simultaneously hold in their hands yet-unrealized hockey dreams and styrofoam cups of bad coffee. They are the first group to identify on-ice talent for the junior level, and draw the earliest connections between the future and current maroon and white rosters. For the past several seasons, a key member to the Petes scouting team was alumnus Matt St. Germain.

“Peterborough was probably on the top of my list of teams I wanted to go to.”

The LaSalle native was selected by the Petes in the 1991 OHL Priority Selection after playing a season of Jr. B in Chatham, Ontario.

“At that time they had always been known as the top franchise for hockey everywhere.”

While with the Petes, St. Germain played along the likes of d-pairing Brent Tully and Chris Pronger, and Petes record holder Mike Harding. He was a member of the 1993 roster that remains one of the most statistically successful in franchise history, and took home a J. Ross Robertson Cup. 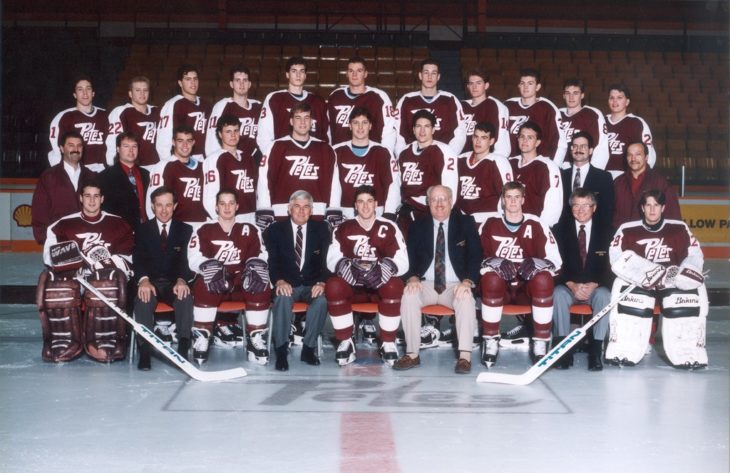 “You start to realize, why the older guys said: ‘cherish it while you play because before you know it, its gone.’”

Following his time in the Patch, St. Germain sought out a kinesiology degree at the University of Waterloo.

“I realized, ‘you know what I’m not into school right now and I had a couple of injuries from hockey, then decided to start looking for a job.”

As he navigated the working world, the right winger began coaching AAA minor hockey in Windsor, moving on shortly after to Jr. B as both a head and assistant coach.

After stepping away from the rink for a year,  St. Germain joined the AAA Sun County Panthers as head coach. He worked with the 1995 born players across three seasons, and during their bantam years sent scouting reports to his alma mater. At the same time he sent the reports, St. Germain expressed interest entering scouting with the Petes which eventually led him to the position of Southern Ontario & Regional Scout.

As he approaches nearly a decade of scoping out on ice talent, the Petes alumnus reflects upon the rewards, challenges and misunderstandings unique to his role.

The wrath of the armchair quarterback

Like any job, there is no such thing as the perfect employee, toss in the unpredictable nature of adolescent development, the inability to view every midget player in each of their games across a season and you are faced with the challenges of a junior hockey scout. 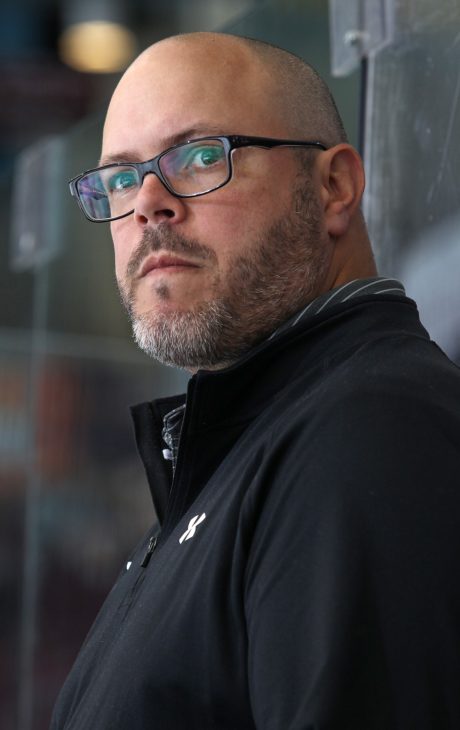 “You catch kids at different times and if you go to see a kid and he doesn’t play well… well everyone has a bad game, so you hope to see them multiple times. If the right guy sees you at the right time, there’s an opportunity.”

“Getting drafted is just a foot in the door, it’s not the end all be all, it’s a long process.”

St. Germain admits that managing a condensed area also introduces the opportunity for bias, something he works hard to mediate, “I always found myself to be pretty fair, sometimes even harder on players. Some guys really want to get into it and really want to say to vouch for players in their region.” He believes the leadership from General Manager Mike Oke permits all voices from the Petes scouting crew to be heard equally and allows them to make the best decisions for the future of the organization.

What might me the most difficult part for green scouts in particular, is the scrutiny of an, “armchair quarterback.” Although the outcome of a draft is often unfelt by a team until two or three seasons following their selections, it doesn’t prevent the public from providing quick opinions at every level.

“There are a lot of tangibles to make the scout look good but it doesn’t take long for people to say ‘what a terrible draft, why did they draft that guy? They could have drafted this guy instead.’”

“People are quick to judge on their first year of playing but you have to wait a year or two. I think as scouts you have to be thick skinned, and you have to realize you are going to make more mistakes than you’re right.”

Although sometimes harsh, St. Germain perceives the feedback from fans -even if hypercritical- as a reflection of their investment in the team and desire for success.

“You can’t fault people, you want to see winners. That’s all our goal.”

“Every year it always gets to me, because it takes you back to when you were in that position and it’s just that pure joy.”

St. Germain points to the announcement of the players selected by the Petes as his favourite moment in the scouting process. On draft day he feels a tinge of nostalgia when his name was called in 1991 and takes pride in the players’ transformation into adulthood, throughout their time with the Petes.

“It’s fun to see them progress and make their goals, and to see them have success and develop into great young men.”

He takes particular pleasure in witnessing the development of underdogs like alumnus Steve Lorentz.  “Lorry,” was chosen late in the 2013 OHL Priority Selection, and went not to contribute to the Petes in a significant way and has gone onto success far greater than predicted.

“Steve Lorentz was always a kid I had a soft spot for because he was a great kid, super nice, but he had just kind of tailed off in terms of draft ratings. I think he was a twelfth round pick but he just kept working.”

Lorentz most recently earned a Calder Cup, with the Charlotte Checkers in their 2018-19 season.

Most hockey fans couldn’t imagine a more fun-filled job than that of the scout: watching endless hockey, making all your fantasy strategies come to life, however it appears it is likely one of the most misunderstood jobs in hockey.

St. Germains laughs, as he reflects on his fall and winter scouting. The majority of junior  scouts, construct their reports from midget tournaments often aligning with major holidays like Thanksgiving. Although their passion for the game is always present, it doesn’t deny that the length of the days at the rink are extraordinarily long.

“There are several times where I have been sitting there, and my eyes are burning, and you can’t watch anymore.”

A typical tournament day puts the Petes scouting team at an arena at 8 AM, and has them posted up at the glass for twelve hours, catching a concession hotdog at lunchtime and then back in the hotel after dinner to debrief the day.

“Until people have done it, I don’t think people realize how long ten or twelve hours at an arena is, and not all the arenas are cozy and warm some of the arenas are pretty cold.”

Despite the humbling conditions of minor hockey arenas, St. Germain recognizes how lucky he is to be among a group of enthusiastic colleagues and feels fortunate to be a member of the tight knit junior hockey world.

“It’s a cool little community of scouts. Everything is top secret but you have cool relationships with the guys. The hockey circle is so different, we are all competitive but it’s a friendly rivalry [off the ice].”

For St. Germain, his unique perspective of the Petes as a former player makes the scout particularly invested in the success of the team. His affinity for Peterborough curated as a teen, passion for the maroon and white, and love for the hockey community gives meaning to each of the alumnus’ scouting reports.