The Voice for the Goalies: Kay Whitmore 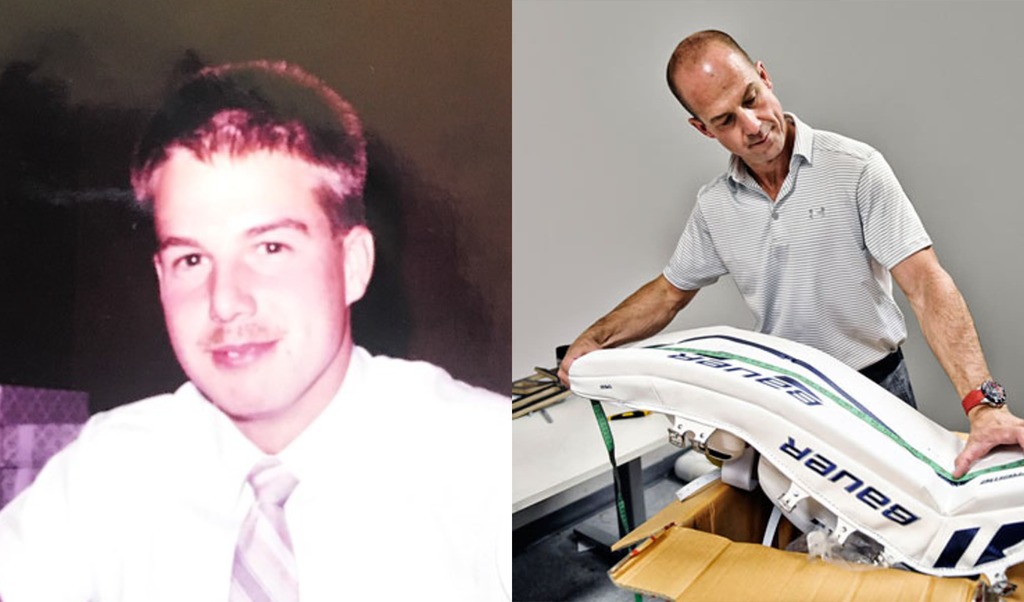 You would be hard pressed to find an individual more qualified to discuss goaltending in hockey than Kay Whitmore. The Sudbury native served a substantial tenure between the pipes before becoming one of the most prominent figures on the NHL hockey operations team and voice for goaltending among executives.

Whitmore’s career in hockey began with the maroon and white when he was drafted by the Petes in 1983.

“In those days I knew I was 16 so I had to go in the first two rounds and I knew the Petes had a couple of picks. It was getting late in the third round so I thought, ‘this isn’t going to happen, I’m probably going back to play midget hockey somewhere’. Then I heard my name and I was pretty excited.”

Although Whitmore never hoisted a championship trophy while playing junior hockey, he maintains that the Petes were a competitive team from 1983-87. More importantly, his experience as a teammate among a group of welcoming players left Whitmore with positive memories from his time at the Memorial Centre. 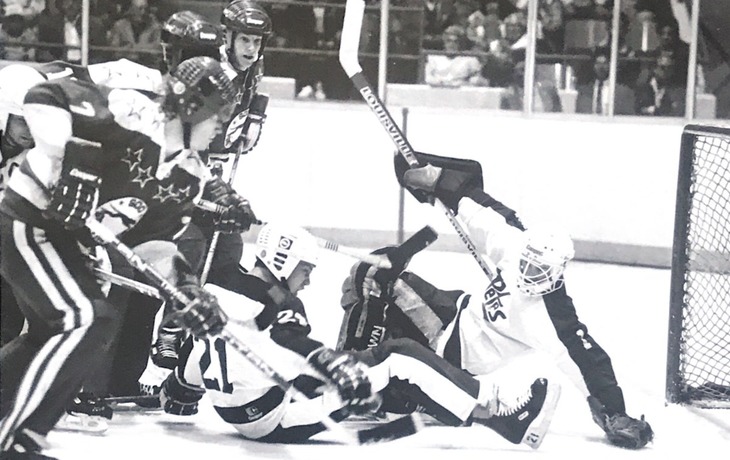 “It was all because we had a group of character guys who were here for the same reason. We never had cliques of two or three guys, we always had a great group of guys.”

Easing the transition as a 16 year old into junior hockey were his billet brothers, Paul Bellamny and Derrick Smith.

“Those guys made it easy. They took care of me at the rink. You’re a 16 year old goalie, you might get a puck zipped by your head a couple of times. Derrick and Paul were there to say ‘take it easy on the guy’.”

Whitmore could write a novel about his journey through hockey and insights into goaltending; below are a couple of the pit stops he has made along the way.

Whitmore was selected by the Hartford Whalers in the 1985 NHL Entry Draft as the 26th overall pick.

“In the ’85 draft there were quite a few goalies who were rated to go fairly high, and I was fortunate to be one of them.”

He began his professional playing career in 1987 with the AHL’s Binghamton Whalers, cracking a couple of games in Hartford towards the end of the 1988-89 season.

“My start was in a playoff game against Montreal, we lost and ended up getting swept.”

The former Pete was then traded to the Vancouver Canucks in the 1992, a monumental shift he was prepared for.

Whitmore and the Canucks would go on to have a Stanley Cup run in 1994, and be a goal away from winning game seven, a moment he is quick to recall. 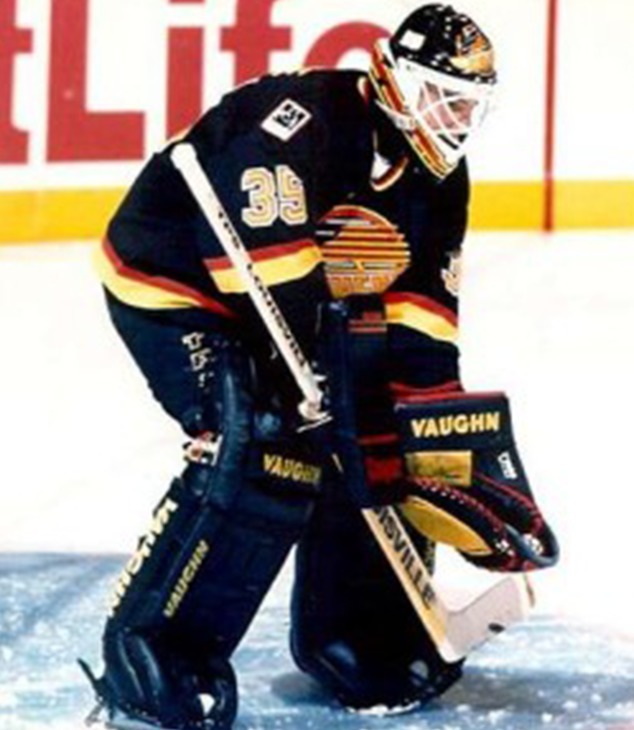 Following his time on the West coast, Whitmore bounced around the IHL, AHL, and Sweden, manning the net for the Detroit Vipers, Los Angeles Ice Dogs, Syracuse Crunch, Binghamton Rangers, Long Beach Ice Dogs, Milwaukee Admirals, Hartford Wolf Pack, and Providence Bruins from 1995 to 2001. He would see a handful of games with the Boston Bruins and Calgary Flames before capping his career with the Saint John Flames, then entered the world of broadcasting. His international trot in the pursuit of hockey is something Whitmore takes both pride and humour in.

“The word journeyman applies to me. That’s probably why Dallas Eakins and I are so close but I think he may have me by a couple of teams, I think my last count was 17 or so. I think at the end of the day, where I was drafted the expectations were a little more but I found a way to grind it out. All in all, it was a fun ride but it went by pretty quickly.”

The evolution of goaltending

The Petes alumnus was originally brought on by the NHL while reporting for the NHL Network to serve as consultant for goalie equipment. In the name of fairness and in the safety of both goalies and players, Whitmore is tasked with reviewing every piece of goalie equipment for all affiliated NHL teams. Located within the NHL’s Toronto office is a clearing house prepped for the arrival of goalie equipment to be measured, catalogued, and then shipped to each team in time for puck drop in October.  With a goalie count across the three leagues upwards of 250, Whitmore receives close to 6,000 pieces of equipment every fall – a number that seems to increase by 8-10% each season.

The most recent and controversial change in goalie equipment has been that in the decrease of pad size, a decision initially met with some resistance that has proved successful.

“We are starting to see a trend where the smaller equipment is actually enabling goaltenders to move quick[ly].”

Of course, any decision that is made by Whitmore and his team is done with safety in mind and in the quest of creating fairness in hockey.

“We’ve worked hard to get the equipment to a place where it fits the goalies well, it’s protective, and produces a playing surface that is level.”

Beyond equipment, Whitmore has also witnessed a dramatic evolution in the preparedness of goalies.

“You know, the average goalie is 6’3’, 200 pounds, so they are not small and they are agile; that leads to how incredible the position is and how high they’ve raised the bar.”

Although the technical precision of current goaltenders often surpasses that of those from the past, he admits some of the greatest netminding was witnessed in the 60s and 70s from the likes of Johnny Bower and Terry Sawchuck. Whitmore marvels at their grit and the challenging conditions current fans accustomed to.

“A lot of it you just survived practice and games; you’re lucky you got through them without a mask. The game was a lot different and practices were a little different, and things evolved. You were more a stand up goalie, then curved sticks came, all these changes.”

He confesses his goaltending was largely based on reaction time and the rudimentary hand-eye coordination that he developed as a child. Whitmore remains continuously impressed with the substantial effort put in by goalies throughout the offseason to refine their technique and movement. The Petes alumnus believes the unique work ethic of an elite goalie, in conjunction with the improvement of situational awareness and strong coaching, has allowed the position to evolve in style.

When he isn’t investigating equipment, Whitmore is one of the executives managing the NHL’s Situation Room. This space houses the watchdogs of the league who sit on the other end of the line when the referees make an on-ice phone call. Whitmore and his colleagues are responsible for every coach’s challenge and have eyes on every goal scored. He is a member of the group that, more weeks than not, consumes back to back hockey six nights a week.

“The season goes by with the 1,200 plus games; before you know it, you’re in the playoffs.”

Much like your average fan, Whitmore looks forward to playoffs every season as it produces an incomparable product to the regular season.

“From there, there is a lot of excitement because the races are so tight and everyone knows that’s some of the greatest hockey you’ve ever seen in the first couple of rounds.” 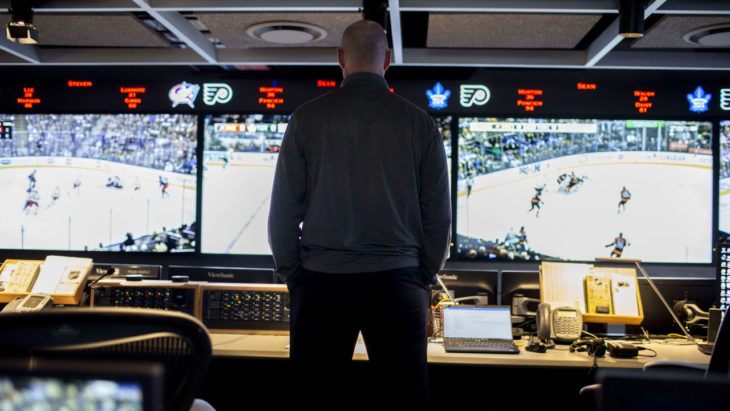 At the time of playoffs, he and his team have members who go into the arena as on-site supervisors and serve as liaisons between the league and coaches and general managers. The main purpose of their visits is to ensure the game is played fairly and to act as resources for any team desiring to chat. Whitmore and the Situation Room team have arguably the highest pressure job of any behind the scenes gig in the league, an understanding that doesn’t get lost on the former Pete. In fact, he enjoys the higher stakes associated with his role as it reflects just how dedicated and invested hockey fans are.

“It’s hard for a fan who is so passionate to understand the ruling but that’s what makes our game so great; we have no horse in the race. A call that happened for a team the previous game doesn’t have any bearing, the score doesn’t have any bearing, you are a neutral party. Our fans are so passionate, our managers are so passionate, no matter whether you feel like you are being consistent or not, some people are going to disagree and that’s the same thing with officiating.”

The recipe for their decision making includes taking in the pertinent information, consultation with the referees who are on the ice, the opinion of a former referee in the Situation Room, and video replay. Whitmore stands firm that at the end of the day their roles are to maintain the integrity of hockey.

“The whole idea is to fix the egregious and always try to get things right in the name of the game, and that’s what we try to do nightly.”

For the Love of EBUG

On February 22, 2020 David Ayres became a household name as the 42 year old zamboni driver famously took to the ice and stood in the net for the Carolina Hurricanes in a game against the Toronto Maple Leafs. As the emergency backup goalie (EBUG) he was forced into the game after Carolina’s netminding duo made up of James Reimer and Petr Mrazek left the game due to injuries.

“It didn’t start out too well this game, we were worried about what was going to happen but the Hurricanes played an incredible third period and it turns out to be a great story.”

The Canes’ victory made Ayres the oldest goaltender in NHL history to win his regular season debut, and shot the Whitby native straight into stardom. For the following month, Ayres and the EBUG were the only things hockey fans wanted to discuss.

“Everyone around the world sees it as a thrill of a lifetime, and they think if I got one chance to play would it turn out this way so I think it’s that moment in sports it makes them feel good. Those kinds of stories where you don’t expect it to h 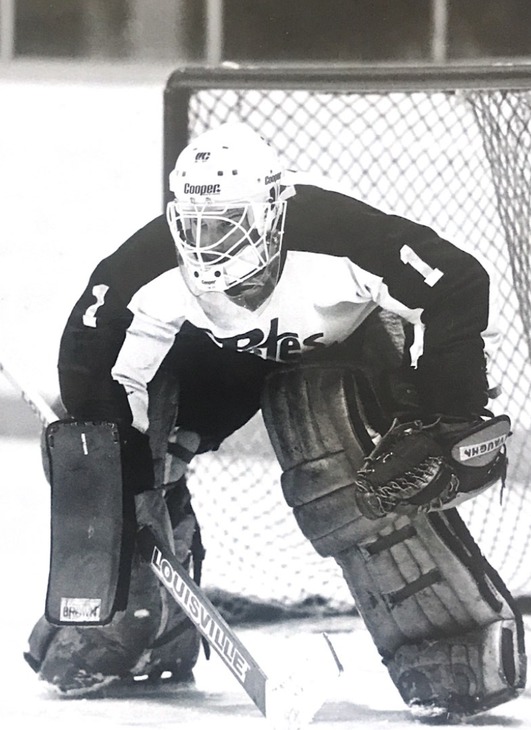 Although rumours floated around the media regarding a potential change in the goalie rulebook following Ayres’ appearance, Whitmore maintains the EBUG will stay in place as it’s only been utilized twice in over 6,000 games. Furthermore, the Petes alumnus confesses to getting goosebumps watching Ayres stand in the blue paint.

Whitmore never predicted that making the nerve-racking decision to stop shots at six years old would shape his entire life, however, it is the very thing that has placed his knowledge in such high demand. His deeply rooted passion for the game, unique perspective as a netminder, and quest for fairness has made the Petes alumnus one of the most crucial voices in hockey.

alumni Jimmy Johnston
You Should Be Cheering for the Dallas Stars . . . Here's Why
10 hours ago