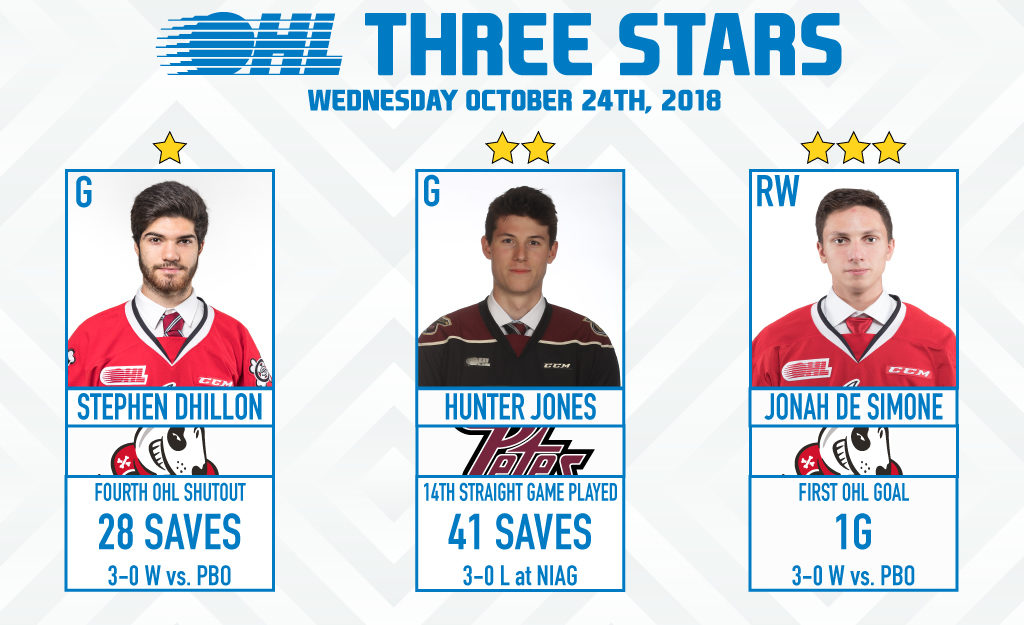 1ST STAR: STEPHEN DHILLON (NIAGARA ICEDOGS):
Overage netminder Stephen Dhillon earned his fourth career shutout, making 28 saves in a 3-0 win over the visiting Peterborough Petes. Dhillon was tested in the third period, making 12 saves to preserve the shutout victory as the IceDogs improved to 7-4-2-0. Dhillon’s 65th career OHL victory sees him improve to 5-2-2-0 on the season with a 2.86 goals-against average and a .912 save percentage. The Buffalo, NY native is in his fourth full OHL season after being Niagara’s third round pick back in 2014.

2ND STAR: HUNTER JONES (PETERBOROUGH PETES):
2019 NHL Draft prospect Hunter Jones‘ strong play continued on Wednesday as he made 41 saves despite his Peterborough Petes being blanked 3-0 in Niagara. The 18-year-old native of Brantford, Ont. is 8-6-0-0 on the campaign with a 2.47 goals-against average and .932 save percentage, suiting up in all 14 of Peterborough’s games this season. Jones was recently named to Team OHL for the 2018 CIBC Canada Russia Series. He is a graduate of the Mississauga Reps Minor Midget program.

3RD STAR: JONAH DE SIMONE (NIAGARA ICEDOGS):
It was a big night for Jonah De Simone, whose first career OHL goal stood as the game winner in a 3-0 Niagara IceDogs victory. De Simone took a feed from linemate and fellow Mississauga Reps graduate Jake Uberti before going in to put a shot past Peterborough’s Hunter Jones low on the glove side. The goal 8:57 into the first period put the IceDogs up for good as De Simone tallied in his 10th game of the season. The Richmond Hill, Ont. native was Niagara’s fourth round pick this past spring.