MENU
Petes face masks are a great way to support your team at school, the office, or around the town! CLICK HERE to choose from two designs and sizes! 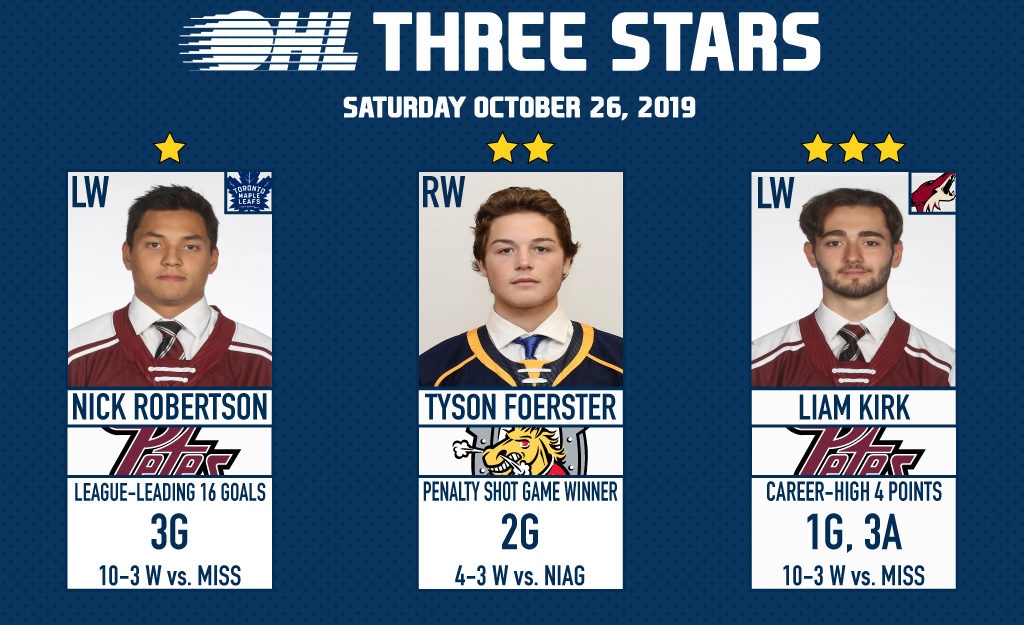 1ST STAR: NICK ROBERTSON (PETERBOROUGH PETES) – 3G
Nick Robertson recorded his second OHL hat-trick, climbing into the OHL goal-scoring lead with 16 tallies on the season as the Peterborough Petes took a lopsided 10-3 win over visiting Mississauga. Roberton’s three-goal night included 10 shots on goal as the Petes overwhelmed the Steelheads. The Toronto Maple Leafs second round pick has 25 points (16-9–25) through 14 games this season. He was originally Peterborough’s first round pick in the 2017 OHL Priority Selection.
• HIGHLIGHTS

2ND STAR: TYSON FOERSTER (BARRIE COLTS) – 2G
Tyson Foerster boosted the Barrie Colts with a pair of goals on Saturday, netting the game winner on a penalty shot with just 2:13 remaining in the third period. Foerster scored 6:19 into the second frame before providing the late game heroics to give him 11 goals 10 assists and 21 points over 13 games on the season. The 17-year-old from Alliston, Ont. surpassed his goal-scoring total from 2018-19 on Saturday, skating on a line alongside Ryan Suzuki and Matej Pekar. Foerster was Barrie’s third round pick in the 2018 OHL Priority Selection.
• HIGHLIGHTS

3RD STAR: LIAM KIRK (PETERBOROUGH PETES) – 1G, 3A
Arizona Coyotes prospect Liam Kirk registered a career-high four points, posting a goal and three assists as the Peterborough Petes charged past visiting Mississauga 10-3. Kirk’s big night saw him in his usual spot alongside Nick Robertson and Semyon Der-Arguchintsev as the Petes hit double digits on home ice for the first time since March 2010. Kirk has 18 points (9-9–18) over 14 games this season. The 19-year-old product of Maltby, England was Arizona’s seventh round pick in the 2018 NHL Draft.
• HIGHLIGHTS

Following in his father's footsteps: Andrew & Jacob Verner
2 days ago

alumni
The challenges, rewards, and misunderstandings of scouting: Matt St. Germain
6 days ago

From the pipes to the mic and some funny stories in between: John Garrett
1 week ago

What’s in a draft? To Doug Evans, nothing
1 week ago