To Peterborough, with Gratitude: Frank Salive 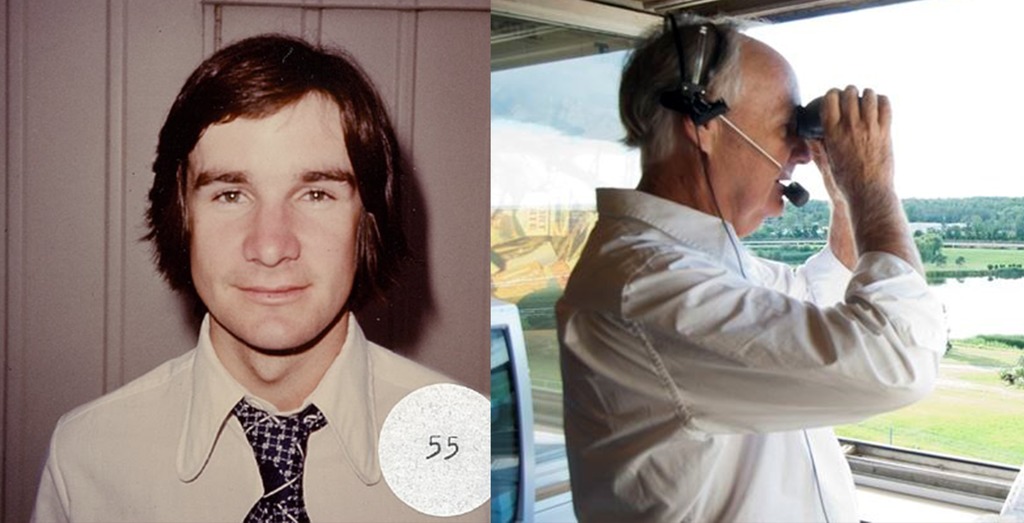 Frank Salive has a voice made for radio. He has mastered the art of storytelling, by striking a balance between Mr. Rogers’ optimism and crystal clear articulation. His vocal skill set and engaging personality is anything but a fluke; rather, it reflects a 48 year career in sports broadcasting and announcing, a journey that began while playing for the Petes.

Originally from Leamington, Ontario, Salive was invited by the Petes to a fall tryout in 1972. Although he was not initially asked to suit up for the team that season, Roger Neilson saw enough promise in the goalie to send him to the Jr. A Pembroke Lumber Kings. In December of the same year, Salive was invited to join the maroon and white on the ice and remained with the Petes for another two seasons.

“I was fortunate to last there with marquee teammates,” explained Salive.

His affinity for the Petes developed long before Salive had the opportunity to mind the net for the prolific team.

Additionally, he was familiar with the legacy of strong goaltending the Petes maintained, citing Mike Veisor and Chuck Goddard as setting a high bar for himself and Millen. While playing for the Petes from 1972-74, Salive dressed alongside some of the club’s most reputable figures including Doug Jarvis, Doug Halward, and Stan Jonathan, a right winger who was issued a unique nickname. 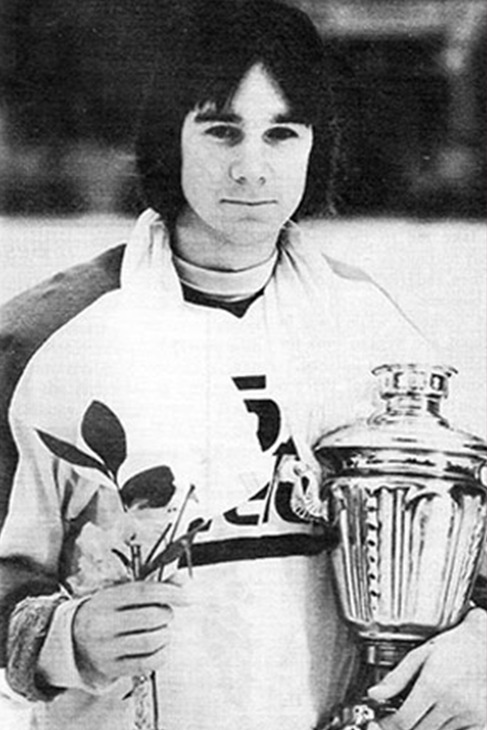 “In his years with the Petes he (Jonathan) would pull up to practice in this fastback Mustang from the late 1960s and he would blare 8 track tapes of the country artist Merle Haggard. Stan Jonathan, to an era of ex Petes, was not Stan Jonathan, he was actually known as Merle because of the singer Merle Haggard,” described Salive.

Like many who played for the Petes throughout the 70s, Salive’s largest mentor was head coach Roger Neilson. He recalls Neilson as shaping his understanding of work ethic and the importance of team, virtues that were largely taught through Neilson’s clever speeches and hockey time decisions. In a playoff game on April 16, 1974, the Petes took on the Kitchener Rangers who were heavily favoured to move onto the Memorial Cup.

“The cleverness of Roger Neilson was shown in so many ways that day he had instructed the team to keep the Rangers to the outside, so they got a lot of shots that day but they were all low percentage shots,” explained Salive.

In conjunction with his simple and meaningful game plan, Neilson also hung a clipping from the Kitchener-Waterloo newspaper that featured a story of the presumptuous Rangers being outfitted with their blazers to go to the Memorial Cup. The game finished with the Petes coming out with a 4-1, after the Rangers out shot them 50-18.

Salive summarized Neilson’s leadership as being paramount not only in this isolated win, but throughout his entire career and to the success of the club.

Outside the Memorial Centre, Salive got his first break in sports media in a step that would long shape his career. This journey began spinning records on CPKG thanks to the legendary Petes play by play announcer Bill Bennett, and working on CHEX television on small projects passed along to him by Gary Dalliday.

“One of my first assignments from Gary Dalliday was in the summer of 1974. I already had keen interest in media, whether it was as a writer or announcer, so he assigned me to Kawartha Downs and I interviewed a young driver at the time named Devon Brown.”

“Then I got introduced to the announcers booth by Graham Wade who was the secretary and announcer at that time, so that was another benefit from the Peterborough area in my life and subsequent career.” 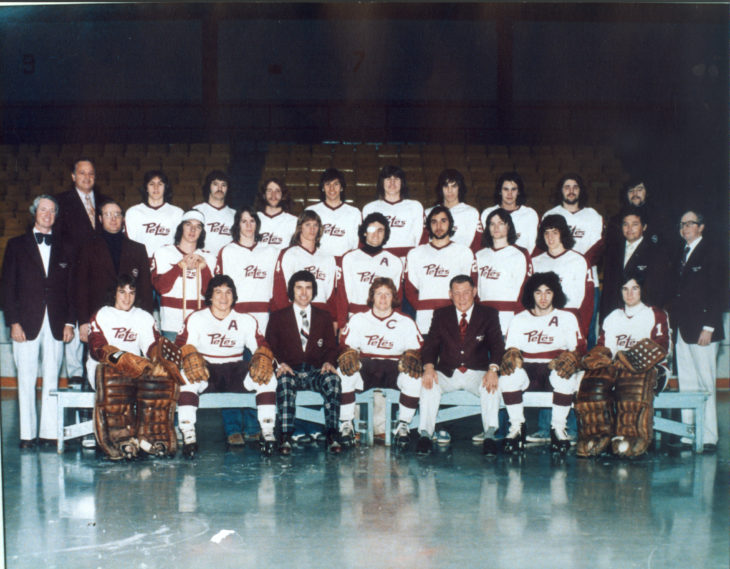 Following his playing career with the Petes, Salive went on to a radio job in St. Catharines with the Fincups, as Sports Director with CKTV, and radio sportscasting for the morning and afternoon drive shows. Not long after, Salive was presented a full time opportunity on Sudbury CTV from 1976-78.

He remained in the Nickel City until an interview with the LA Kings’ Dale McCourt for CBC, landing him a full time role on radio and television in Windsor. At this time he was also doing assignments for TSN covering stock car races at Checkered Flag Speedway. His tenure with CBC Windsor included reporting on Mike Bossey becoming one of the first players to score 50 goals in less than 50 games since Rocket Richard, for Hockey Night in Canada.

“I got a lot of the recognition for being Roger’s goalie in those years. Along with the Petes, those legendary past figures from Peterborough media helped me a lot to set the course for my career, and I really owe a debt of thanks I can never repay for how great an impact they had on my life and subsequent careers. I was the lucky guy to be on duty for all those developments in racing.”

In 1990 Salive auditioned for a vacancy at the Ontario Jockey Club at Woodbine Racetrack and, following a couple of nights tryouts, the former goalie locked in the role of announcer at Canada’s Horse Racetrack. He would maintain his role at Woodbine for sixteen years, and become the voice of Canadian horse racing.

“It was a very transitional time in racing and I was lucky to be the right guy in the right place for those years. It is when racing moved into off track betting and then the internet arrived and the exposure was suddenly worldwide”

In 2005, Salive left Woodbine to scale back the pace of his life and worked for four years at Western Fair in London, Ontario. He was then recruited to work in Pompano, Florida where he called races for another four years, until he made an attempt at retirement in the Caribbean. Salive’s pause in paradise was short-lived when the General Manager of the Fort Erie Race Track reached out to Salive.

“I will be starting my fifth year being the lead race announcer and television host for the racetrack.”

How great was my company last night? Got a visit from Frank Salive, Nathan Bain & family, Moira Fanning, Tom Charters, and John Campbell! It doesn’t get any better than that! pic.twitter.com/3Gn8ESHKB2

Although Salive admits to being on the long side of 65 years old, he is firm that his passion and love for racing is, “still as strong as ever.” In fact, gusto seems to define all parts of Salive’s life. Where he stays in the winter is two kilometers from the home rink of the Florida Panthers, who he admits is his NHL team of choice.

“There is a wonderful young defenceman, Riley Stillman – son of Petes alumnus Cory Stillman- from Peterborough, who just stepped right in the Panther’s lineup this year and he’s just been a real joy to watch.”

When he’s not at the rink or the racetrack, Salive enjoys hitting the links, taking in the beach, or taking cruises with his wife.

“I am very, very fortunate to still have a hand in horse racing, a hand in broadcasting, and being close to the NHL.”

Ladies and gentlemen, put your hands together for the one, the only … Frank Salive! http://t.co/i1iti8sQ1m pic.twitter.com/RHMp9y6pR5

As Salive recalls his journey from his first tryout with the Petes to his current life split between Florida and Fort Erie, he reflects on each milestone with overwhelming thankfulness, and is quick to identify the people who lay the foundation to his success, any of whom are from Peterborough. Humility is woven into each of his stories and he is the telltale of hockey offering much more than what is captured on the ice.

“Once you have been with the Petes, it’s a great, wonderful thing that stays with you for the rest of your life, and I am living proof of that even if I didn’t go on to play in the NHL.”

In the simplest terms and with typical Salive gratitude, the Petes alumnus concludes, “it’s been a wonderful life and a wonderful career.”