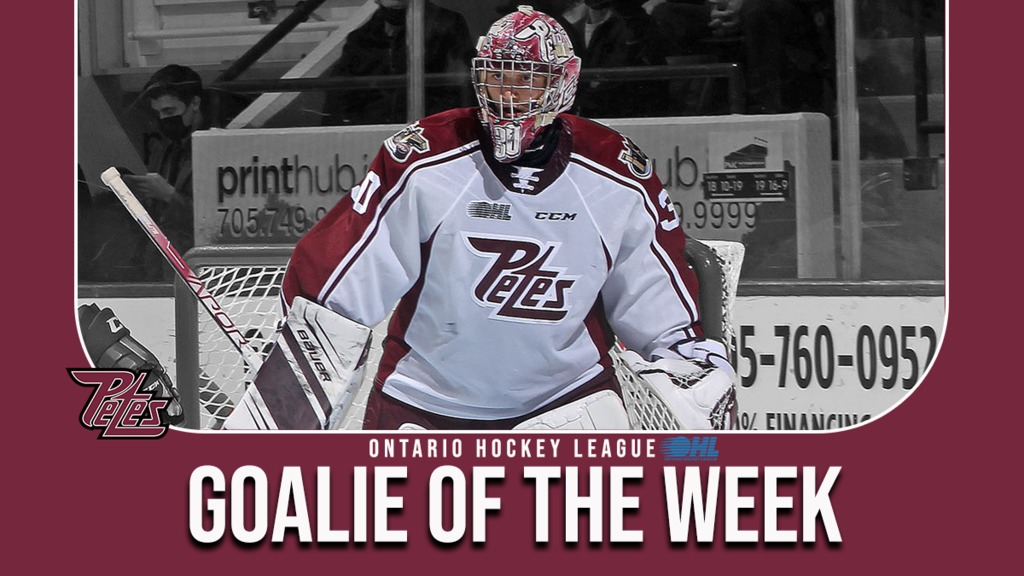 The Ontario Hockey League announced today that Peterborough Petes Goaltender Tye Austin is the OHL Goaltender of the Week after winning a pair of games while posting a 2.50 goals-against average and .923 save percentage.

Austin recently returned from injury and turned aside 60 of the 65 shots that came his way last week. He made 19 saves in Thursday’s 5-3 win over the visiting North Bay Battalion, snapping the Troops’ four-game winning streak in Mason McTavish’s return to the Petes lineup. Austin provided a season-high 41 saves in Sunday’s 3-2 win over the Ottawa 67’s, earning first-star recognition as the Petes were outshot 43-29, earning their third straight win.

“I was able to have a quick recovery time because of all the awesome doctors in Peterborough the Petes medical staff. Natasha Legacé and Chelsea McQuade provided me with great support and worked with me day to day doing different exercises so that I was able to focus on coming back strong. I’m excited to be back, this group has a special bond and has been playing really well together lately,” explained Austin.

A 19-year-old from Pembroke, Ont., Austin missed a month of action with a shoulder injury, returning to the Petes’ lineup on November 18th. The 6-foot-6, 200Ib. netminder is 3-2-0-0 with a 3.83 goals-against average and .888 save percentage in six games this season. Selected by the Petes in the third round (43rd overall) of the 2018 OHL Priority Selection, Austin owns a career mark of 14-16-0-1 with a 4.16 goals-against average and .877 save percentage through 42 career regular season games in maroon and white.

Also considered for this week’s award, last week’s recipient Ben Gaudreau of the Sarnia Sting was strong once again, going 1-1-0-0 with a 2.03 goals-against average and .937 save percentage in two games. London Knights goaltender Brett Brochu was kept busy, making 113 saves over three outings. He posted a 2.95 goals-against average and .926 save percentage as the Knights went 2-1-0-0.